The Question of Race Meet Dates.

The matter of race meet dates is one of extreme importance. A glance at the small number of legal holidays and a corresponding peep at the large number of clubs anxious to give race meets lead one to imagine that some club will be on the short end. In all cases where two clubs apply for the same date and one club is a league club while the other is not the league club invariably gets the sanction. 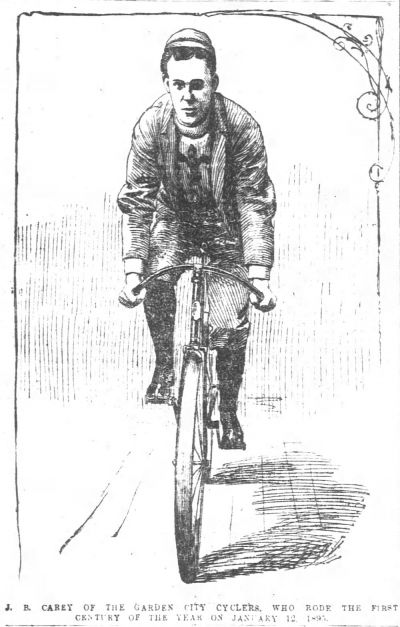 As yet no sanctions have been granted and most probably will not until after the new chairman of the national body L. A. W. has been elected.

The Bay City Wheelmen have applied for May 30th. The Acme Wheelmen of Oakland, Sacramento Athletic Wheelmen of Sacramento and the Oak Leaf Wheelmen of Stockton desire July 4th. The Imperial Cycling Club wishes to hold a race meet on September 2d. The Garden City Cyclers of San Jose have applied for September 9th, and the Olympic Club Wheelmen solicit a sanction for October 7th. This virtually covers all the available dates. Unless a club should ask for either Thanksgiving, Christmas or New Year's. Of these three days the first is preferable, yet with the object lesson learned by the Acme's unsuccessful attempt in 1893, and the wisdom gained by attending the San Jose Road Club's meet held on last Thanksgiving day, it is barely possible that not even this date will be much sought after.

There yet remain several clubs to Apply for sanctions. Prominent among them may be mentioned the Reliance Wheelmen of Oakland, San Jose Road Club, the Oakland Cycling Club and the California Cycling Club.

It was expected that this matter of arranging race dates would be settled at the meeting of the Board of Governors of the California Associated Cycling Clubs, which takes place next Saturday evening, but it appears that the association has no jurisdiction in the matter whatsoever, the full power being placed in the hands of the chairman of the league racing board.

On the last club run of the California Cycling Club, under Captain W. N. Brunt, the members visited tbe California Camera Club rooms in a body and were photographed by Professor J. J. B. Argenti. All participants in this run received a complimentary photograph from the Professor last Monday evening.

The California Cycling Club has decided to postpone its ladies' night until Saturday evening, February 9th. Messrs. Vermeal and Edwards have been elected to membership in the club. The motion to change the club's colors from red and white to blue and white to avoid conflicting with those of the Olympic Wheelmen was lost.

The Oak Leaf Wheelmen of Stockton have resigned from the associated clubs.

J. S. Egan and A. L. Holling have been placed in nomination to succeed Captain Conger of the Imperial Cycling Club. The election will take place Monday evening, February 4th.

It was announced several weeks ago that C. C. Harbottle, the riding teammate of Otto Zeigler Jr., was to join the California Cycling Club and ride on their relay team. Investigation of this announcement proves to the contrary. Harbottle states that he will attach himself to none of the Coast clubs while visiting the Pacific Coast.

The San Jose Road Club is now comfortably installed in its new clubrooms.

W. S. Hamilton of San Jose will retire from the bicycle business on the 1st of the month.

The Sacramento Wheelmen will be represented at the next meeting of the Associated Clubs by L. S. Upson.

A. W. Cleaver, the racing man of the Chicago Cycling Club, has taken up his residence in Los Angeles.

Alexander Forsyth, the ex-secretary of the Olympic Club, announces his intention of becoming a convert to the king of sports.

The Acme Wheelmen announce a five-mile handicap club race to be held on February 5th, providing the roads dry up.

The Garden City Cyclers intend bolding a twenty-five-mile race on May day between San Jose and Gilroy. The course is a straight one and runs parallel with the railroad. The club has secure an observation train to keep up with the racers.

In the "Spiers" twenty-five-mile road race held October 27th last Wilbur J. Edwards of the Garden City Cyclers defeated Otto Zeigler Jr., thereby winning the $100 piano. He has now presented it to his club for the future adornment of their handsomely equipped clubrooms.

Lew Black and his newly made bride are expected back from the East to-day.

W. L. Elliott of the Imperial Cycling Club returned this week from the Chicago cycle show. While there he placed an order for a motor bicycle, which he expects to reach here the latter part of the month.

Al Alcayaga, the oid-time ordinary racing man, bas joined the California Cycling Club and will represent this club in the track and road races.

At last Monday evening's meeting of the Imperial Cycling Club they decided to postpone their "smoker" until after the races at the Mechanics' Pavilion. 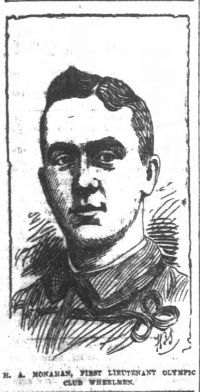 H. A. Monahan, the first lieutenant of the Olympic Club Wheelmen, although a rider of but one year, has rapidly ascended the ladder of fame, and his election to this position is a high tribute to his earnest work since entering the cycling ranks.

In speaking of the League meeting at San Jose last Saturday the Pacific Cyclist will have the following to say to-day: "The meeting of the board of directors of the North California Division, L. A. W., last Saturday night was held in the new quarters of the Garden City Cyclers. Chief Consul Melrose presided, the folllowing members being present: Judge T. H. Kerrigan, Robert M. Welch, J. A. Desimone and C. N. Ravlin, George P. Wetmore and Vice-Consul Inglis were represented by proxies. The Chief Consul stated that as it was the desire on the part of the board of officers to have the chairman of our racing board made a member of the National Racing Board, efforts were to be brought to bear upon the Eastern officers to this effect.

"Probably the most interesting report was that of the chairman of the racing board, which was in substance as following: Owing to a possibility of race-meet dates clashing, a circuit will be found called the Metropolitan circuit, embracing San Francisco, Oakland, Alameda and San Jose, and no sanction will be given in any place within a radius of fifty miles on a date taken by one of these cities, the object being to permit no sanctioned bicycle event in two of these cities on the same day. In regard to sanctions, the rule giving preference to league clubs is being rigidly followed, the Bay City Wheelmen having applied for May 30th and the Garden City Cyclers for September 9th, and they being the only League clubs, their applications will therefore have to be granted. Endeavors are to be made with the divisions of Washington, Oregon, Southern California and Arizona where by a series of Pacific Coast championships will be arranged - not the everyday sort of championship, but a race in which there will be a distinction in winning.

"A general talk followed relative to holding a league meeting this year. It was decided to make a proposition to the Garden City Cyclers that they take charge of the league meet on July 4th, bear the expenses and share the profits, but admitting league members free of charge upon presentation of their league tickets."

A committee consisting of three delegates each from the Bay City Wheelmen, Olympic Club Wheelmen, California Cycling Club and Imperial Cycling Club met in the clubrooms of the Bay City Wheelmen last Wednesday evening for the purpose of considering the advisability of forming a track association to put in repair and keep in continuons running order the five-lap cement track, situated at the corner of Eighth and Market streets.

Inquiry from the cycle dealers by some of the committee found them favorably disposed to bear a part of the monthly expense. As the delegates were powerless to authorize the expenditure of money, the committee finally decided to report back to the respective clubs. The committee will meet again in a body on Tuesday evening next, at which time permanent organization will be considered.

All delegates spoken to on the question after the meeting are kindly disposed toward the idea, and it seems quite possible that the much-needed training facilities will soon be accorded.