In Allan N. Jones, Category:San Jose and the Garden City Cyclers have another new rider like Delmas, of whom they can well be proud. Jones is the same age as Ziegler and Delmas, and weighs 159 pounds. His height is 5 feet and 9 inches. He commenced racing on the 4th of last July, so is almost unknown. Jones is still a Class A rider and will remain among the simon pures this year. Like Delmas, he won second in his novice race. It was on September 10th at San Jose, but in the half-mile handicap the same day he got away with first prize. In the half-mile race on October 1st, at Alameda, he won second but at the Thanksgiving Day meet of the San Jose Road Club, he was first in the half-mile scratch, and proved again that he was a dangerous man at a half mile. In the mile handicap that day Jones finished second, and these two races cover his whole racing experience. On the quadruplet Jones is the third man from the front and the other riders say that only the high gear keeps him from taking the pedals from them. For his short experience Jones may well feel proud to have ridden a mile in 1:34 1.5, though he divides the glory with the rest of the "quad" team. 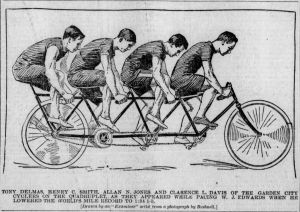