The Oriental Club and Its Members Who Are Speedy.

Forecast of the Results of the Alameda Races - The San Francisco's Ride to Mount Hamilton.

Although scarcely a year old the Oriental Bicycle Club of this city already holds an enviable position among local organizations of wheelmen. Its first meeting was held in June, 1891, and its growth has been constant and steady ever since. Over 50 members are now enrolled, and from present indications this number will be doubled before the end of the year. The location of the clubhouse on Pacific Heights having been found inconvenient, it is proposed to lease or build a cottage near the park, or on one of the 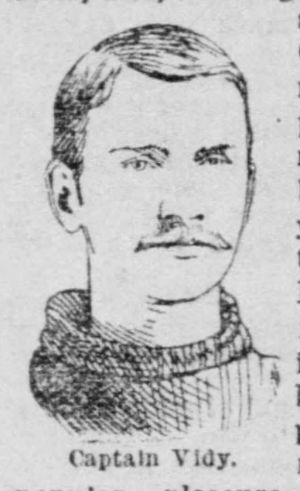 main avenues to that popular pleasure resort. Among the "scorchers” belonging to the club, A. Alcayaga, L. A. Vidy, J. Leikins and L. Vidy [perhaps James Gabriel Vidy] are notable both for speed and endurance. Alcayaga has trained a little too hard for the Alameda races, and, although he is entered for the one mile State championship and the two-mile handicap, it is doubtful whether he will appear on the track in racing costume to-day. Were he in good form, however, he would not be found far behind the leaders. The Century run made by ten members of this club last Sunday is an event not to be overlooked, for better time has not heretofore been made by a similar number of riders belonging to one organization. As a popular member of the Orientals remarked the other day, "the boys don't go in for style, but they know how to ride.” The officers of the club are as follows: President, D. P. Dolan; secretary, F. Hansen; captain, L. A. Vidy; first lieutenant, W. McGrew; second lieutenant, M. Griffith. The uniform is black, with a star and crescent on the cap, and the club colors are red, white and orange.

THE RACES AT ALAMEDA.

The event of the season in cycling circles will be the races to-day on the new track of the Alameda Bicycle and Athletic Club. Never before have our wheelmen had an opportunity of testing their speed on so perfect a course and it will be a wonder if all coast records are not broken. Nearly every section of the State is represented in the long list of entries and it will be no easy task to pick the winners. Nevertheless, a few prognostications, based partly on personal observation of the men in training and partly on the judgment of expert wheelmen, may not be without interest. Of course, nothing is certain under the sun and every forecast may be reversed by unforeseen circumstances. The first event on the programme is the one-mile safety novice race, for which there are 21 entries. This will be run in four heats. In the first Brown and Toepke should finish in the order named. The second is likely to be taken by Davis and Hudson. Faulkner and Maxwell stand a good chance in the third, and the fourth looks like Neece and Delmas. For the final Brown, Toepke and Neece should make the pace hot.

Then comes one of the events of the day, the one-mile safety State championship. In the first heat Frank Waller, "the Flying Dutchman,” will undoubtedly cut out the pace, and if his muscle can master his high geared wheel, Grant Bell will have to hustle to come in first. J. C. Smith of the Garden City's will make it warm for Stoddard for second place. The second heat is almost conceded to Foster, with Ives very close up. For the final Foster is a slight favorite over Bell.

The three-mile ordinary State championship is thought by many to be between Lipsett and Lund, but H. Smith and Marshall will not be far off at the finish.

In the first heat of the two-mile safety handicap Ives and Edwards are favorites. Foster is not likely to start, so Needham and Stoddard will try to keep out of Toepke's way. Brown and J. C. Smith have about equal chances for the third, with the final very much in doubt.

The two-mile ordinary handicap may be between Lipsett and H. Smith, but Upson is a dangerous dark horse.

Lipsett is expected to beat Lund by a small margin in the special one-mile ordinary.

The five-mile safety scratch race will be an exciting event. Foster and Bell will again meet. They are thought to outclass the field, and the best guesser is most likely to pick the winner.

A RUN TO MOUNT HAMILTON.

The San Francisco Bicycle Club had a most enjoyable run to Mount Hamilton yesterday. Only 16 members went but considering the length of the trip this is doing quite well. Starting from this city on the 3 P. M. boat Saturday, Smith Creek was reached at 8:15 P. M., some of the boys remaining there, while others kept on to the observatory, returning about 11:30 P. M. to Smith's. Everyone was up and ready for an early start home, and the mountain air and fine roads and scenery was fully appreciated. A merrier party could not be imagined than was presented by the boys flying around the sharpest curves, down the mountain road, singing the club song, accompanied by occasional bursts of admiration as a turn in the road revealed some new view of peculiar beauty. As the boys got down into the valley the wind was blowing so strongly that the majority of them rode to San Jose, got a good dinner and returned by train, while the others pumped up against wind and dust. Pneumatics were given a test as hill climbers and were not found wanting. The only accident which occurred was the breaking of the frame of one of the wheels, which is a trifle, considering all the wild riding which was done.

Captain Pixley has called a picnic run of the San Francisco Bicycle Club to Mill Valley on June 12. The members will assemble at the North Pacific Coast Railroad at 9 o'clock A. M. riding from Sausalito, lady members included. There will also be a club scorch to Menlo Park on Sunday, June 17, starting from the clubhouse at 6 A. M.

A run to Santa Cruz is in prospect and will probably be held some time in June or early in July.

The Monterey Wheelmen is the name of a new club just formed in Monterey with Fred Kuemmuller, captain; H. L. Bradford, president; Frank Barrey, secretary. The new club has applied to the league for membership, adopted a fine set of by-laws and will be heard from at the race meets very soon. Monterey is a fine place for wheeling and success is predicted for the new club. Captain Pixley of the San Francisco Bicycle Club has been elected an honorary member.

Wilbur F. Knapp has returned from Santa Cruz, where he has been dilating on the merits of his favorite wheel.

Starting at 4 o'clock yesterday morning the following San Jose wheelmen rode to Alameda, arriving at 8:45 o'clock: President Lamkin and Secretary Bothwell, of the Garden Citys; President Parker, Lieutenant Zeiglei [guessing Ziegler] and Secretary Belloli, of the San Jose Road Club, and Clare Marckres, unattached. The latter came to grief in trying to make the pace, but will be with his companions at the races.

Many of the Bay Citys went out of town yesterday, Captain Doane taking his fishing tackle to Milpitas, but they will all be at Alameda to-day.