Tenth of Series of Sketches, Accompanied by Photographs Found in Garrets and Homes of Business Men Who Were Devoted Followers of Sport in Early Days of the “Silent Steed." 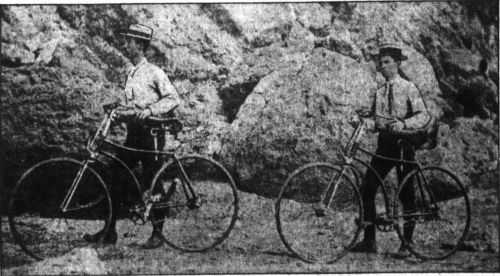 AS JOE DELMAS AND W. F. LENZEN APPEARED IN '89. Photo taken on the beach at Capitola after a hard ride across the Santa Cruz Mountains.

W. F. LENZEN, whose photo is reproduced this morning, as No. 10 in a series of sketches of the careers of San Jose's primordial cyclists, owned one of the first four "safeties" that ever appeared in this city, purchasing it in '88. Today he is a member of the well known firm of decorators and painters of the same name, who have done some of the biggest jobs in their line in this county, and whose headquarters are located on West San Fernando street.

The other three safeties which came to San Jose about the same time that Lenzen's did, were purchased by Al Wagner, Joe Delmas and A. C. Kenney, all of whom are well known in local business circles.

"BH" Lenzen, as he was known in the days before he had assumed the cares of a hustling business man, did not attempt to follow the racing circuit, but he got the "long distance fever," and the miles of roads of all descriptions that he could cover in a single day was something incredible considering the weight of the "bone-shaker" that he first bestrode. Joe Delmas was his riding mate and chum, and the two together essayed many a long jaunt. It was not uncommon for them to start out from San Jose in the morning for San Francisco, ride out to the Golden Gate Park and around the metropolis, and then pedal home again in the same day.

They also made the trip across the mountains to Capitola frequently and the above photograph was taken in one of these trips, the scene depicted being almost on the spot where the bowling alley at the sea-side resort is now located. The photograph gives a fairly good idea of the cycling togs of that period.

These were less like circus riders' uniforms and conformed more to comfort than did those which the riders of the "ordinary" first adopted.

Bill was also a member of the Garden City Wheelmen, and participated in all of the club runs and good times that that organization was noted for in this, the heyday of cycling. At this time the hotels and resorts of Los Gatos, Saratoga, Poncelet's, Gilroy and Almaden, counted on the wheelmen's support, and weekly, and often daily, entertained scores of dusty bike men.

Bill was fond of the Gilroy trip and his bicycle created more interest when it first appeared in that city than high grade automobiles do today.

Like his team mates, the cares of his business compelled him to forego the pleasures of cycling, and about '93 he became a member of the firm of M. Lenzen & Co., which is located at present at 58 West San Fernando street. These are the decorators who had charge of the refinishing of the buildings at Stanford University after the recent big earthquake. 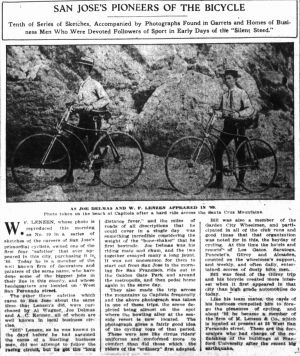