Since Thursday the principal topic of conversation among wheelmen has been the fact published that day exclusively in the CALL that W. A. Terrill, the crack class B racer, was to go East next week to compete during the racing season on the Eastern circuit. Terrill is known to be a phenomenal rider, and after a little experience as to the ways and means employed by Eastern men to win races he will be up in front in many a hot finish. He has all the necessary speed and endurance to cope with the best of them and will uphold the reputation of California racers to every one's satisfaction. Terrill is only 20 years of age, but is powerfully built, weighing 180 pounds. He has instructions to report to M. F. Dirnberger, manager of the Syracuse team, at once, so will leave here tonight. With Terrill and Ziegler on the Eastern circuit, and Bald and McDonald, who have become famous friends with every one whom they have met here, Californians will watch with interest the results of all Eastern races this season.

The Imperial Cycling Club will have a run to Redwood City to-morrow, where lunch will be ready on their arrival. On May 12 the club will hold a five-mile road race from San Mateo to San Carlos, in which Frank Byrne will endeavor to get within the coast record of 13 minutes 10 seconds for the distance.

The Camera Club Cyclists held a meeting last Thursday night. The club is progressing finely, and will soon have a large membership. Captain Argenti is going to arrange some pleasant weekly runs into the country. The combination of the wheel and photography is a good one.

Lieutenant Siebe of the Golden Gate Cycling Club rode a century last Sunday. To-morrow, he and Mr. A. G. Maass of the same club will undertake the ride to Santa Cruz, which is considered a very hard trip, as it embraces about ninety miles of riding, the last forty being very hilly. The Golden Gate Club will hold a Ladies' night in the near future. The club is prospering.

Of all the various Eastern cycling weeklies that reach us out here, Bearings prints the best coast news. S. B. Vincent is the local correspondent, and often has two or three columns weekly of very interesting reading matter. Vincent is considered one of the best class A men on the coast, and has a penchant for riding to San Jose and return on a Sunday, one hundred miles, "just for the exercise" as he expresses it.

The Outing Road Club's run to Centerville was postponed last Sunday owing to the rain until May 12. To-morrow Captain Davis and some of the members will ride a century around the bay, leaving here at 4:30 A. M. The roads should be in excellent condition for the trip.

The San Jose Road Club is showing great activity as the riding season commences. Last night they held a party at their clubrooms. A members' meeting will be held Monday night to decide upon dates for their next road race, for a smoker, a ladies' night and a joint run with the Acme Club Wheelmen of Oakland. Besides these events, all to take place in May, they are making preparations for holding a race meet at Central Park in this city within a month. W. Harris, who rode the second relay for the club and was badly injured, is again riding and will soon commence training for various races. In the next five-mile road race of the club McFarland, Navlet and Belloli will attempt to lower Edwards' five-mile record of 13 min. 10 sec., made two weeks ago from San Mateo to San Carlos.

The Road Club members state that before Otto Ziegler left for the East he agreed to wear their emblem, the “ivy leaf," in all races in which he was entered. They have no doubt but what he will keep his promise. What will the Olympics say to this? He is a member of that club also, and wore their colors at San Jose on April 19 and 20.

Members of the Young Men's Christian Association of San Jose have recently organized a bicycle club within themselves. Vincent M. Peel was elected president and Elgin C. Hurlbert secretary. A committee, consisting of J. H. Bills, E. C. Hurlbert and J. Dunn, was appointed to prepare a constitution and by-laws. The new club starts off under favorable circumstances and should be successful.

The Bay City Wheelmen's “blind picnic run" starts to-morrow morning from Golden Gate avenue and Polk street at 19:30 o'clock. Captain Dodge declines to reveal the destination, but promises an easy ride and a hearty lunch, so the members have asked no further questions, but will make it a point to be on hand.

The California Cycling Club will start on a run to Santa Cruz to-night, leaving the clubrooms, at Twenty-second and Folsom streets, at 5:30. They will ride to Congress Springs, remain there over night, and be well on their way early to-morrow morning. The trip should prove very enjoyable.

The list of bicycle events to be run at Santa Rosa next Thursday, in conjunction with the rose carnival, was published in the CALL Thursday. There will be a competitive parade in the morning, in which the Petaluma, Reliance, Santa Rosa and Bay City Wheelmen and the San Jose Road Club have been invited to ride. The races will all be class A events, open only to wheelmen resident in Sonoma County, with two exceptions - a one-mile handicap and a half-mile handicap, class A, to be participated in only by members of the Bay City, Reliance and San Jose Road clubs, prizes for which are as follows:

A special excursion rate of $1 for the round trip has been secured for all who wish to attend. Those who desire to compete in these two races should send their entries at once to the Santa Rosa Wheelmen.

The Reliance Wheelmen of Oakland will have a club run to-morrow to Tocaloma in charge of Captain Bates.

The Lowell High School Wheelmen will hold a series of short races this afternoon at Central Park track at 2 o'clock.

One of the fastest rides ever made on the coast was ridden last Wednesday from San Jose to Oakland by several members of the Garden City Cyclers. The distance is forty-three miles, and every mile was ridden under a three-minute gait. The start was made from San Jose at 7:10 A. M., the party consisting of G. W. Pollard and Hal Chase on a tandem, Captain Delmas, C. N. Ravlin, J. B. Carey, N. Bryan and W. Hamilton. The tandem set out at a three-minute clip, with the riders strung out behind in single file. Centerville, twenty miles away, was reached in less than an hour, although a few short stops were made as one of the machines needed adjusting. At Centerville a broken machine delayed the riders forty-five minutes. A fresh start was finally made and they came through without a hitch, the actual riding time being two hours and ten minutes for the forty-three miles. They would have returned to San Jose that night by wheel, but rain made this impracticable. The time made marks this as the fastest club run ever ridden in California. 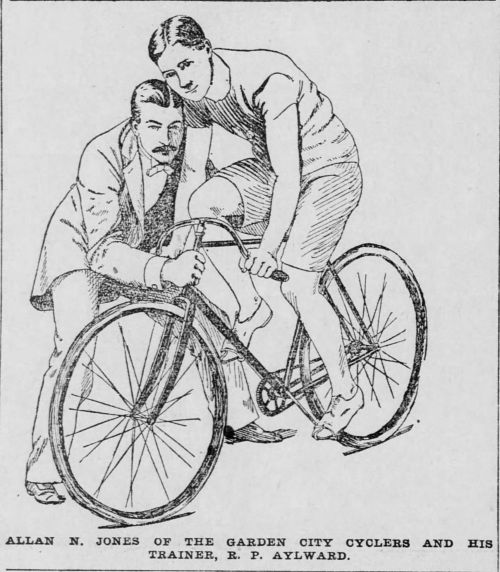 Allan N. Jones of the Garden City Cyclers, San Jose, is a rising star among California's young racers. He has shown remarkable speed on the track and was considered among the best class A men of the day, being ranked with H. F. Terrill and Archie Reid. He left this class last week, however, and entered in the class B events to be run at Oakland, which were postponed to May 11 on account of rain. What he will be able to do against the long experience of the "B" riders is yet to be seen. He is being trained and managed by R. P. Aylward, than whom there is no better on this coast, and under such favorable conditions his best speed will be developed. In March at San Jose Jones rode a third of a mile under the world's record, but it did not stand, being made on a Sunday at an unsanctioned race meet.

With the departure of the Columbia team for the East yesterday we have seen the last, for the present, of E. C. Bald, who proved by his performances while here to be one of the fastest riders in the world. He carries back with him the honor of two world's records to his credit, and speaks very highly of the many attentions shown him while here. He said he expected to return next fall, about November 1, when a large number of Eastern racers will be here. Asa Windle, who is Bald's trainer, says California's climate is perfect for developing racing men, and he will bring his men out here every spring to train. Ray Macdonald, the other rider of the team, has been unwell since his arrival; in fact, he is not yet able to travel, and will not go East until next week. The Columbia team went to Los Angeles last night, but will not race there. They are due at Waltham, Mass., May 15.

Chief Consul Melrose has returned from his trip to Los Angeles. He says the league is gaining new members every day, which seems natural enough, considering the many advantages it offers for the nominal yearly dues of $1. Now is the time to join, if at all. The Bay City Wheelmen and Garden City Cyclers have renewed their membership in a body and the Acme Club Wheelmen of Oakland have just joined with their entire membership.

The Santa Rosa Wheelmen have been very active the past few months, and the races to be held there this coming week will give them a fresh impetus. The officers of this live club are: A. P. McGregor, president; A. Schelling, vice-president; J. W. Ramage, captain; E. P. Sawyer and W. F. Pettis, lieutenants; E. Brooks, A. Westrup and L. W. Burris, directors.

C. S. Wells, the great class B rider, went to San Jose yesterday to train for the races to be run at Oakland next Saturday. He has made no arrangements as yet regarding an Eastern trip, but expects an offer from the Columbia team after Trainer Windle has arrived there and had a talk with Colonel Pope. The Syracuse people would also like to secure Wells - in fact, he has no lack of offers.

The attention of wheelmen is called to the fact that some very interesting cycling news appears in the CALL every Saturday in the correspondence from Los Angeles, San Jose, Stockton, Sacramento and other principal cities of the State. 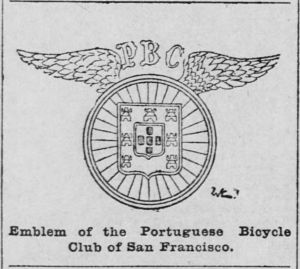 Emblem of the Portuguese Bicycle Club of San Francisco.

There was organized last week in this city the first Portuguese bicycle club formed in the United States. A meeting was held at 525 Front street, those most active in the movement being Felix F. Trigueiro, Bettencourt da Camasa, Antonio A. Sarmento and Jose Baptista. The charter-roll has twenty-one signatures and it is hoped to bring the membership up to an even hundred before long, as Portuguese wheelmen resident in surrounding counties will be invited to co-operate.

The club members will wear an emblem consisting of a wheel surrounding the coat-of-arms of Portugal, two blue wings supporting the wheel. The next meeting will be held at 525 Front street, Thursday evening, May 10.

The Acme Club wheelmen will have a run to-morrow, under Captain Kitchen, to the Cliff House and Ingleside. They leave Oakland on the 9 A. M. creek-route boat.

O. S. Potter, Pacific Coast agent for the Halladay Temple Scorcher bicycles, will leave to-day for the East for the purpose of securing a larger proportion of bicycles than formerly used, as the trade is rapidly increasing on this coast.