Difference between revisions of "Theodore A. Schlueter"

Two Oakland Young Men Take a Trip Around the Bay.

George A. Faulkner and T. A. Schlueter, captain of the Alameda County Wheelmen, made a most enjoyable century run around the bay Sunday. They started from San Francisco at 5:45 A. M. arriving at San Jose at 11:30 oʻclock, after having been delayed one and a quarter hours by an accident to one of the wheels. They left San Jose at 12:20 P. M., arriving at Twelfth and Webster streets in Oakland at 4:40 o'clock, without dismounting from their machines. The distance covered was 101 miles. The roads were in excellent condition, with the exception of the first ten miles, which were rather muddy on account of the fog.

The Acme Bicycle Club has done its part to keep up the record of the club. The club has over one hundred members, and has the following officers: De Witt C. Vancourt, Captain; George F. Neece, First Lieutenant; Theodore Schleuter, Second Lieutenant; O. L. Pickard, Bugler.

The Acme's bicycle team which won the EXAMINER trophy in the relay race of last May consisted of ten men who rode from San Francisco to Oakland in 5 hours 48 minutes and 51 1/2 seconds. The ten men were J. A. Sampson, H. A. Maxwell, M. F. Rose, Grant Bell, J. A. Howard, George A. Faulkner, A. Belding, Theodore Schlueter, J. B. Harris and George F. Neece.

The joint run of the Bay City Wheelmen of this city and the Acme Club Wheelmen of Oakland, to Camp Taylor, was attended by nearly one hundred riders under Captains Dodge and Kitchen, The long climb up White's Hill, which it is believed has never been ridden before, was accomplished by Theo. Schleuter of the Acmes. The road was in good order and there were no serious mishaps. 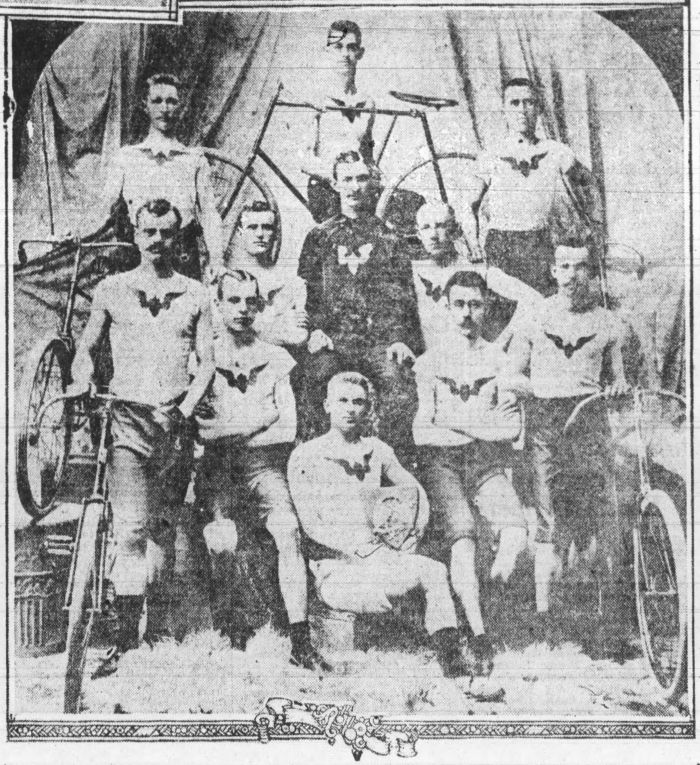 The reunion this week will be the fifteenth annual for those who were club members and fans 40 years ago, when they took part in or cheered the winners of boxing and wrestling tournaments, bicycle races, road races and gymnasium contests. The first reunion was held in 1921, and since then the affair has become an annual event to which the old-timers look forward. WHEELMEN of the Acme Club began racing against San Francisco riders back in 1893, (part 2) when the 100-mile jaunt around the bay was a big sports event. The 1896 team, they tell me, included Joe Rose, Theodore Schleuter, Walter Decker, Eddie Smith, Jim Kenna, Jack Sampson, George Nissen, Al Swain (who was team captain), M. A. Squired, Jack Howard and Pete Le Fevre.