LODI, CAL., July 30. — Theron R. Lillie of this place has been selected as one of the transcontinental relay bicycle racers for the ride next month. He has the route through the snowsheds from Dutch Flat to Truckee. He is the man who made the first official bicycle record from San Francisco to New York. 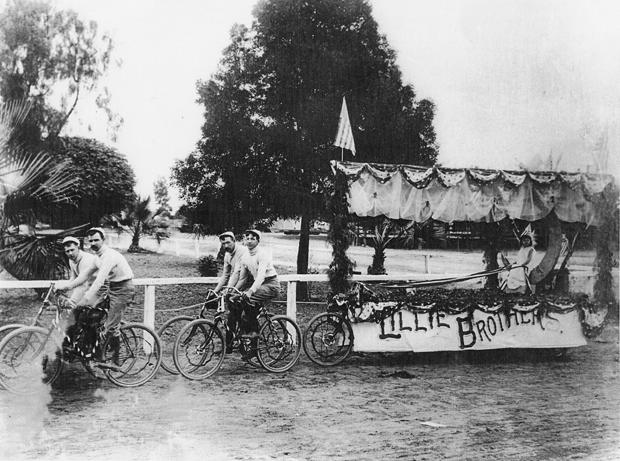 Theron and J. Harry Lillie were well-known businessmen in early Lodi from 1896 to 1910. The Lillie brothers were tailors and telephone company owners, and Theron also operated a bicycle shop and automobile repair garage. This photograph shows the Lillie Brothers’ float in a parade.
Ralph Lea/courtesy photograph

By Ralph Lea and Christi Kennedy/Special to the News-Sentinel Oct 5, 2013

Theron R. Lillie was a man of many interests, talents and troubles. He was part of Lodi’s history for probably fewer than 20 years, but he had an impact on a rapidly changing time. He set athletic records, attained a measure of national fame and operated a number of different businesses with his brother that helped usher Lodi into a modern world with telephones and automobiles. But his life ended in tragedy.

Theron Rufus Lillie was born in Aug. 1868 in Ontario, Canada. He was the second child of Henry and Henrietta Lillie. Theron’s brother, Johnathon Henry Lillie (who was known as J. Harry) was two years older. Theron’s sister, named Lillie according to online genealogy records, was two years younger.

His background could not be tracked, but Theron and his brother appeared in the Lodi area by the mid-1890s. They were young men in their early 20s and were trained tailors.

Theron became a naturalized citizen on July 31, 1896, and he was listed that year on voter registration forms for the west Lodi precinct in San Joaquin County. His occupation was listed as tailor.

In addition to being a tailor, Theron was an accomplished cyclist. A recognized “wheelman” as serious cyclists were known, Theron apparently established an official speed record for riding a bicycle across the continent from San Francisco to New York, according to the San Francisco Call newspaper of July 31, 1896.

In the 1890s, bicycling, aided by the affordable development of comfortable pneumatic tires, was experiencing a boom. Bicycles were used for common transportation. Bicycle shops were sprouting up in cities across the nation, including Lodi. And, encouraged by media attention and national contests promoted by San Francisco and New York newspapers, cyclists were regularly venturing in numerous speed contests across the continent.

Right at the time Theron Lillie became a naturalized citizen, he was selected to be on the transcontinental relay cycling team for a race set to leave San Francisco in Aug. 1896. The San Francisco Examiner and the New York Journal newspapers sponsored the race, and Theron was on San Francisco’s team.

The 28-year-old Lodi cyclist was selected to ride the most difficult and dangerous section “through the snow sheds from Dutch Flat to Truckee.” Theron and his team won the race in a record-setting time of 59 days and 11 hours.

Back in Lodi, in the mid-1890s Theron’s older brother, J. Harry Lillie, bought a tailor shop owned by a man named Ferguson. That shop also housed Lodi’s telephone office and operations, so Lillie found himself in the telephone business. Presumably, like Ferguson, Harry, joined by his brother Theron as partner, continued tailoring alongside the telephone work.

On Sept. 26, 1897, the Sunset Telephone & Telegraph Co. was formally established with 27 telephones in the Lodi area.

In Dec. 1901, the Lillie brothers improved their system by installing taller telephone poles to hold the wires. Originally, telephone wires had been placed on fence posts or low poles and were too easily broken by farmers’ equipment. About that time, the Lillie brothers moved the telephone office and switchboard to their tailor shop on the north side of Pine Street. Harry and Theron Lillie were listed as managers.

By 1901, there were 54 telephone users in the Lodi area. A year later, the number of telephones grew to 95. By 1904, the directory listed about 200 telephone subscribers.

While the telephone business was growing rapidly, Theron decided he wanted a change. Theron, an accomplished tailor, cyclist and businessman, left managing the telephone company to his older brother and branched out again on a new venture. The brothers dissolved their partnership.

While there were several bicycle shops in town, Theron’s flexibility and talents led him to open a business that sold bicycles and offered an automobile repair shop. There were not many automobiles in Lodi at the time, but the number of autos, like telephones, was growing. And Theron, who operated the only garage at the time, kept the automobiles running.

In Dec. 1905, Theron showed that the racing spirit was still part of his soul.

A wealthy mine owner, Percy Hamilton McMahon, was visiting Lodi but desperately needed to catch a train leaving Sacramento in two hours that night. The only possible way to get there that fast was in an automobile, and someone suggested calling Theron Lillie at his garage to get an auto.

“Now Theron Lillie never promises much, but if there is anyone who can get there in a hurry it is he,” stated the Lodi Sentinel. His cycling feats were recalled in the newspaper that called Lillie “the pride of the Oak Leaf Wheelmen” club.

“Lillie touched a match to the headlight of his ever ready Olds runabout, the auto that has covered the most miles and stood the greatest abuse of any in the county, and the run was commenced,” the newspaper stated.

“Over the county roads they flew, frequently hitting heavy ruts in the uncertain light. There are some bad bridges and mean places in the road to the Capitol City and it tries the nerves of the most daring chauffeur to run at a high rate after dark.

“Lillie never said a word. With one foot on the brake and the other on the throttle he was prepared for any emergency. His passenger gritted his teeth and hung on for dear life,” the newspaper said.

They made it to the Sacramento depot with 15 minutes to spare.

“The grateful passenger handed the automobile man a twenty dollar gold piece and refused to take any change. It was worth that much to catch the train and the experience was priceless,” the Lodi Sentinel said.

Meanwhile, troubles began to haunt Theron Lillie. His marriage to Emma was dissolving, and a newspaper article printed after his death mentioned that drinking and financial problems plagued him.

In early June 1910, he apparently got a letter from his wife who said she wanted a divorce. Theron, known as Teddy to his friends in Lodi, attempted suicide but was stopped by friends.

But four days later, Theron Lillie sat on his bed in his rented room above Beckman, Welch & Thompson’s general store on Sacramento Street. He fatally shot himself through the heart with a .38 caliber revolver. He was 42. Theron Lillie was buried in Woodbridge Masonic Cemetery.

Vintage Lodi is a local history column that appears the first and third Saturday of each month.

From bicycles to phones and suits, Theron Lillie influenced early Lodi
By Ralph Lea and Christi Kennedy/Special to the News-Sentinel Oct 5, 2013