The Bay City Club's Crack Kindergarten - Gossip Around the Headquarters.

S. H. Knapp, an old-time member of Bay City Wheelmen, is up from Fresno on a visit and will be entertained by his clubmates.

At the board of directors' meeting of the Bay City Wheelmen held last evening much important business was transacted. All the reports of the various officers showed an increase over the past year.

Captain Belloli of the San Jose Road Club is quietly preparing to launch into road racing as soon as the weather becomes more settled. He is confident that his club will make a good showing in the coming relay race.

The report that Otto Ziegler, Jr. has deserted the San Jose Road Club is unfounded. The "Little Demon" will continue to wear the ivy leaf.

On Sunday, January 13th, the San Jose Road Club will hold a ten-mile handicap road race and, if possible, establish a new record. The present record for this distance is now held by W. J. Christ of The Olympic Club Wheelmen, his time being 27:15. The San Jose Road Club is proud of the fact that for the past two years it has been the first club to hold a road race and this year it is again to lead off. The clubrooms are being handsomely fitted up in a comfortable and homelike style.

Walter N. Brunt, ex-captain of the California Cycling Club, met with an accident last week in running for a car over slippery cobblestones. This resulted in a sprained limb. He expects to be around in riding form in a few days.

The next run of the California Cycling Club will be to Mount Tamalpais. Captain Burke expects a large attendance on this run. The boys have been cooped up so long by muddy roads that they will be glad of a chance to once more resume their favorite sport.

Captain H. H. Martin of the Bay City Wheelmen will not call a run for tomorrow.

The Olympic Club Wheelmen's team is desirous of bowling a team of five men composed of cyclers from any other club, for a trophy of any value. Bowling tournaments are at present being held in the East among the cycling clubs, and tend to keep up the interest during the months that the members are unable to ride their wheels. Acceptances should be addressed to George H. Stratton, care of the Olympic Club.

Messrs. Bunn, Ramsay and Ford, the three cyclists who were anxious to make the first Coast century, abandoned their proposed trip, owing to the muddy condition of the roads around the bay.

Unique invitations are out for the Olympic Club Wheelmen's first smoker, to be held in Union-square Hall on next Saturday evening. An imposing array of talent has been secured, and it promises to be an entertainment of high order.

H. F. Wynne, Secretary of the California Cycling Club, was presented with a new '95 mount on Christmas eve, by his club mates, in token of their appreciation of his work for the advancement of his club.

E. W. S. Van Slyke of the Bay City Wheelmen is at present in the East, Upon his return he will bring his new '95 mount with him.

Al Jarman of the Garden City Cyclers has commenced training and will be on the club's team of relay riders.

The Garden City Cyclers propose putting in a relay team this year, equal to if not better than the one of last year, to defend their rights to the trophy now in their possession. 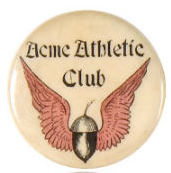 The run of the Olympic Club Wheelmen on ordinaries last Sunday was postponed on account of the weather. If rain does not interiere it will take place to-morrow. The destination is the beach and Golden Gate Park. The run is to start promptly at 10 A. M. from the clubhouse.

Recently the Garden City Cyclers' kindergarten issued a challenge to Menne, Lundberg, Day, Caldwell, Battles and Hall, constituting the kindergarten of the Bay City Wheelmen, which was promptly accepted. Had the rains not interfered the match race would have been run off immediately. The race is to be for one or ten miles, and the trophy is to be of good value,

Arthur F. Lundberg has never participated in any races, but on club scorches he is always ahead in the bunch. He is 5 feet 6 1/2 inches high, and weighs 143 pounds.

Fred L. Day is 20 years old, weighs 146 pounds and stands 5 feet 7 1/2 inches high. He has done little racing on the track, but his clubmates declare that on a club scorch he is strictly at home.

George P. Caldwell, the smallest in the group, is 19 years of age, weighs 135 pounds and is 5 feet 5 1/4 inches in height At the Stockton races on July 4, 1893, he rode third to Bert Small in the novice race and his time was 2:37. In the California Associated Cycling Clubs' ten-mile race he finished eleventh from the two-minute mark.

E. S. Battles is a racing man of more prominence than the last three mentioned, and is 5 feet 8 inches tall, weighs 135 pounds in riding condition, and is only 18 years of age. He began racing in 1892 in the road races of the Pacific Road Club, being more or less successful taking second place in the novice race of the meet of the Bay City Wheelmen on July 3, 1893, which was won by Dick Aylward. On the eight relay of the great relay race Battles did exceedingly well for his club and succeeded in beating the time of all his opponents on this relay. From the two-minute mark in the Associated Cycling Club's ten-mile road race he won eighth place.