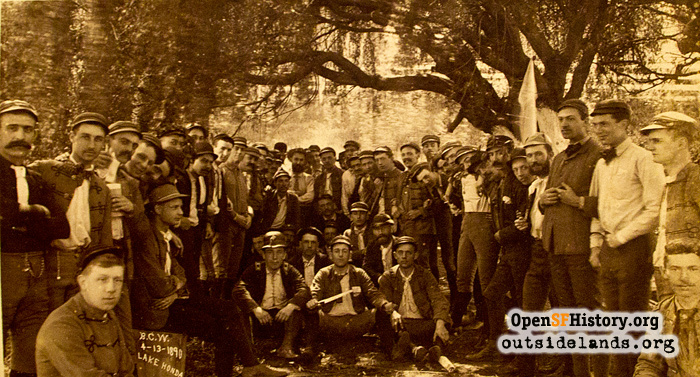 The Bay City Wheelmen are greatly pleased over the prospect of at last having a Sunday when the weather will permit them to have a run. They hold their annual picnic to-day at Lake Honda and expect a very large attendance, both of members and visitors from other clubs. The Oakland club will have a majority of its riders present, and at least a half dozen of the Vineyard Valley cyclists will participate. Captain Richardson has made excellent arrangements for the comfort of those going on the picnic, and the Committee on Refreshments is confident that its report in the shape of "grub" will be amply appreciated.

The Bay City Wheelmen's picnic run to Lake Honda last Sunday was a great success. There were about seventy riders, an unusually large attendance. The roads were in good shape, and as the pace was not too hot for the newer men, every one enjoyed the ride and afterward the splendid lunch that had been prepared. Cyclists were present from Oakland, Stockton and San Jose.

The opening run of the Bay City Wheelmen was a grand success, over seventy wheelmen participating. The line was formed at Van Ness avenue and Market Street at 10 o'clock, with Captain T. E. Richardson in command, accompanied by Captain G. F. Drake of the Oakland Bicycle Club of 1887, with the latter club in the place of honor,

Lieutenant L. G. Hodgkins and J. Holroyd assisted the captain in keeping a perfect line. The column wheeled out Golden Gate avenue, through the park, to the Cliff, where a short halt was called, after which the ride to Lake Honda was enjoyed. Here the Bay City Wheelmen commissary, consisting of Messrs. Sperry, Cook and Butler, awaited them with a most refreshing repast, to which full justice was done. The afternoon was spent in various ways, some riding in the park, others wheeling to Lake Merced and many enjoying the music of the park band.

The following 3 pages are in this category, out of 3 total.