Edwin Mohrig (Bay City Wheelmen) and Mr. Osborn wheeled from San Jose, via Saratoga, to Santa Cruz. This is a most beautiful trip. Up the mountains from Saratoga five mlles is rather a long climb, but the magnificent scenery down the other side to Boulder creek (fourteen miles), and so on to Santa Cruz, well repays one for almost any effort to reach there. A return can be made via Soquel and Hotel de Redwood to San Jose. It is rather too long a trip to go from the city to Santa Cruz in one day, but can be most comfortably made by stopping overnight at Saratoga Springs, and so on the next day to Santa Cruz.

Messrs. Plummer and Wetmore of the Bay Citys were the first to my knowledge to make the trip in one day, they going down one day last June. However I wouldn't advise anyone to try it unless they are pretty well hardened up. 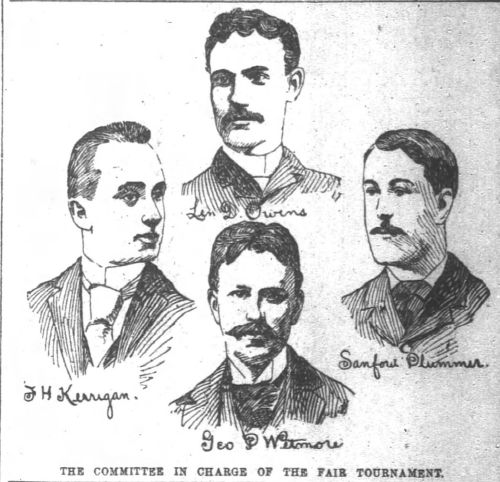 The personnel of the committee which has the matter of the Midwinter Fair races in hand may be of interest to the general public. George P. Wetmore, the chairman of the committee, is known to all the wheelmen of California. He has been interested in bicycling for a great many years, and was the foremost spirit in the great tournaments which were held in this city on the 1st, 3d and 4th of last July. He has been president of the Bay City Wheelmen for the last four years, and is known as a great worker and a splendid executive officer. 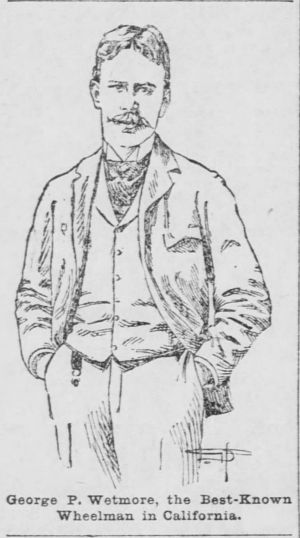 Pictures of two very prominent and popular cyclists are this week produced, George P. Wetmore and Edwin E. Stoddard. Mr. Wetmore has been associated with cycling since 1889, and has taken an active interest in its development. He is full of good ideas, has opinions of his own which he is not afraid to express, and is looked upon as an authority in all matters pertaining to the sport. He is noted as the most accurate timer of a race in California.