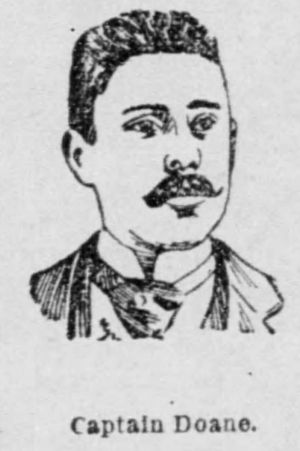 Captain Plummer and Thomas H. Doane of the Bay City Wheelmen were over in Alameda county yesterday, scouring the county over for a new route for a club run, and, as a result of the trip, the Captain announces a run for next Sunday, May 31, to Laundry Farm and return. The club will leave the foot of Market street on the 9:15 o'clock creek route boat, and from Broadway a leisurely pace will be kept up until the new hotel at Laundry Farm is reached. Here a special dinner has been ordered to be ready at 11:30 o'clock. After a rest and stroll about the grounds the run will continue along the base of the hills, and so on through East Oakland to the station.

The Bay City Wheelmen formerly held this record with twenty-six men finishing out of a possible twenty-nine, and it will give Captain Doane a good chance to prove his managerial powers by making an attempt to regain the record. Ex-Captain Meeker of the Bay Citys got for that club the record by percentage even before the L. A. W. century by bringing through fourteen out of fifteen starting, the one falling only by the breaking of his wheel. The route was the circuit of the bay.

Captain Doane of the Bay City Wheelmen has recently developed into a swimmer of no mean abilities. On a recent trip along the San Bruno bay road the doughty captain, who by the way is still riding the G. O. O., struck a small hole and was thrown into the bay. The way he struck out for shore was most graphically described by J. K. Thornton, who was riding with him. ["G. O. O." = "Good Old Ordinary." - MF]

The California Division, L. A. W., century run has been called by Tourmaster Doane for Sunday, June 5th. It is expected that the run will be to Hollister, provided enough riders express their intention of going to guarantee the expenses of a special train back. If fifty wheelmen go the fare back will be under $3. All interested should address Thomas H. Doane, care of the Bay City Wheelmen, 519 Van Ness avenue, this city.

The run home was a continuous spurt, Captains Doane and Pixley leading, and making a pretty hot pace. Doane would have the best of it had not his wheel met with an accident, which let Pixley lead in in the remarkable time of 1 hour and 40 minutes. The next picnic will take place in the latter part of July to Larkspur, where the San Franciscos have a summer home. It is hoped that the Acme, Alameda and San Jose clubs will send good delegations on that occasion.

CHAT ABOUT THE CYCLE. - The Acme Athletic and Wheeling Club of Oakland. - An Enjoyable Picnic Run From This City to San Mateo - A Party at the Alameda Pavilion. - The San Francisco Call, May 9, 1892

Captain Doane of the Bay City Wheelmen also limps a little, but this is an "ordinary” occurrence, and he will soon be leading the club rups as of yore.

CHAT ABOUT THE CYCLE.- Active Preparations for the Races at Alameda - Speedy Wheelmen in Training - The Coming League Meets at Sacramento and Washington. - The San Francisco Call , May 16, 1892