a wheel with two wings

A new bicycle club has been organized in this city which will be known as the Pansy Cycling Club. Its officers are: President, Alfred Bach; Vice-President, I. Goldman; Secretary-Treasurer, Henry Paulsen; Captain, Charles W. Etting. The first run will be to Camp Taylor to-morrow.

The Pansy Cycling Club recently changed its name and emblem and now rides under the name of the Pacific Cycling Club, using as its emblem a shooting star and tail somewhat on the style of a comet. The emblem is made of a bright yellow felt, and it is expected to be seen in the front in the coming races on Decoration day,

The riding club, formerly known as the Pansy Cycling Club, has changed its name and emblem. It will hereafter be known as the Pacific Cycling Club and the emblem will be a wheel with two wings. Next Sunday's run will be to San Leandro by the way of Laundry Farm, starting on the 9 o'clock creek boat.

The Pacific Cycling Club was organized in this city on March 30th last as the Pansy Cycling Club, and on my advice the name was changed a month ago so as not to conflict with the pansy emblem of the Pathfinders. Members of the old Pacific Road Club were consulted before adopting the present name and no objections were raised.

The present officers of the Pacific Cycling Club are: President, A. Bach ; Vice-President, I. Goldman; Secretary-Treasurer, Henry Paulsen: Captain, Charles W. Etting. The remaining members of the club are Fred Paulsen, Frank Scott, Harry Leavenworth, W. R. Douglas, A. Herbst, F. M. Hartter and H. Simpson. The membership is limited to fifteen members, and as nearly every member turns out on the club runs it is distinctly a riding club in the true sense of the word. Among the points of interest visited by the club already are Camp Taylor, Niles Canyon, Haywards, San Jose, Tocaloma, Laundry Farm, Centerville and other nearer by points of interest. 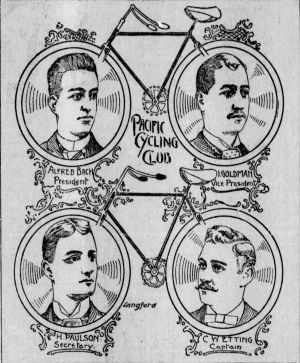 President Bach and Vice President Goldman, although riding but a short time, are surprising the other members with the gait they can keep when on the road. Secretary Paulsen is also a new rider. He has a racing bee in his bonnet and may be seen on the track this season.

Captain Etting of the Pacific Cycling Club is well known among the wheelmen of Frisco, having ridden several years, at one time being Captain of the Hosperian Cyclists. The Pacifics have some good singers, and they think of challenging the quartet of the Pathfinders for championship honors.

Last Monday evening the Pacific Cycling Club held its annual election of officers, with the following result: A. Herbst. president; Frank Scott, vice-president; Henry H. Paulsen, secretary-treasurer; F. W. Paulsen, captain; Frank Flaglor, first lieutenant. Ex-Captain Charles W. Etting was presented with a handsome medal by the club as a token of good will. He has been captain ever since the club was organized and has taken a great deal of interest in its welfare. The medal is of a very original design, the bar being shaped like a comet (the club emblem), while the body of the medal is a perfect little bicycle wheel, the two parts being joined together by links shaped like trouser-guards. Mr. Etting was taken wholly by surprise when the presentation was made, but found words to express his gratitude.