Fifty-two bold bicyclers mounted their attenuated vehicles yesterday morning at ten o'clock; at the corner of Van Ness and Golden Gate avenues, and urged onward by the merry blasts of a bugle went scudding over the intervening space to a rendezvous in Conservatory Valley, Golden Gate Park. Captain Henry London, of the San Francisco Club, led the way, and Lieutenants John C. Quinn and Charles McLaughlin, of the same club, and C. H. Lowden, of the Oakland Club, hung on the flanks of the regiment, encouraging the weak-kneed and bringing to safety an occasional rider whose noble steed had incontinently bucked him off into the road. As they mounted the first acclivity a sharp wind swept through the ranks, but the warm glances of admiration which all along the way greeted them like a benison from a hot stove kept up their courage.

Captain Strong, attired in their tasty uniform of dark blue, presented an inspiring appearance, which the dozen odd uniformed riders of the San Francisco Club in dull brown could not rival. Thirty-eight members of the latter club were in the field, with three riders from Sacramento. The valley was reached after half an hour's spirited work, and there it was found that nearly two thousand people had assembled to witness the promised maneuvers. The large open space in front of the conservatory wreck was blocked with settees, and the riders, led by Captain London, rode into it four abreast, making a rapid revolution in that order and quickly swinging into double file for another turn. A revolution

Followed, and then, in answer to an abrupt bugle note the wheelmen began a zigzag movement in perfect order and undistinguishable transition, comprising evolutions unknown to Upton but pleasing and exhilarating to the lookers-on. Then the order was reversed, double file, fours and eights, in military style, much to the satisfaction of the spectators, who enthusiastically applauded these graceful tactics. At eleven o'clock the signal to dismount was sounded and the space was cleared. Soon a single rider - Charles Leonard - dashed into the field, and after making a revolution sprang to his feet on the narrow seat and tore around the ring like a circus rider, guiding his slender machine with his feet.

Not satified with this exhibition of skill he threw himself flat on his back in the seat, with his body at right angles to the bicycle, twisted and contorted into a dozen positions, slid down the "back-bone," jumped on and off, running, standing, from the rear and from the treadle, all the while racing around the arena at full speed. This exhibition of fancy riding was enthusiastically applauded by the spectators.

At 12 o'clock the wheelmen refreshed themselves with a luncheon at the Casino, Ralph de Clairmont presiding over the festivities and proposing numerous toasts in honor of the noble sport of bicycling and its followers, all of which were responded to. After the lunch the three Sacramentans rashly proposed a "constitutional" to the Cliff House, and H. C. Finkler undertook the task of piloting them.

This meet is the first of a series, the next to come off in three or four weeks. A club of ten lady riders, who will use tricycles, is to be organized. Three tricycles have been ordered, and are now on the from the East. 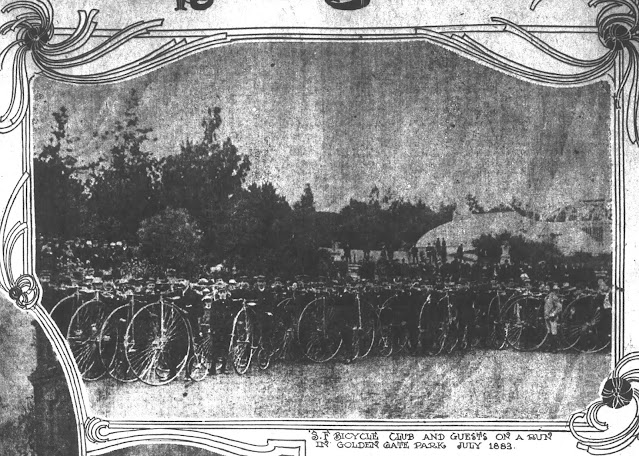