(Redirected from A. C. Thornton)

The many times postponed run on ordinaries of the Olympic Club Wheelmen will be held to-morrow, Weather permitting. The run will leave the club promptly at 10:30 A. M. under command of Captain A. C. Thornton. 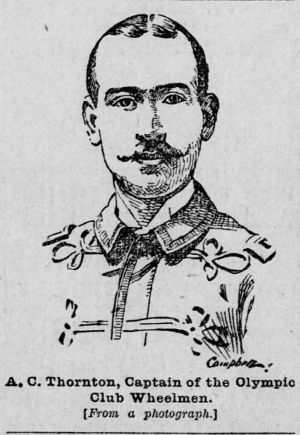 Captain Arthur C. Thornton of the Olympic Club Wheelmen is now serving his second term of office, which is of itself an evidence of his popularity. He is always on the lookout for some novelty in the way of club runs for his men, and invariably leads them at a well-measured pace which all can follow. Personally, the captain is 26 years of age, 5 feet 7 inches in height and weighs 150 pounds. He has never aspired to be a racer, but as a road rider he is never known to quit. He sees a joke quickly, always has a new story to tell and repeats it in his inimitable way, and is the jolliest of the company on a run or at the club evenings.

Messrs. L. C. Hunter and A. C. Thornton are making preparations to enjoy a two weeks' wheeling trip to Lake Tahoe and surrounding country, even going over to Virginia, Nev. The start will be made about the middle of July.

Arthur C. Thornton, who was captain of the Olympic Club Wheelmen for two terms and who has lately had his headquarters at Portland, is in the city for the holidays, renewing old acquaintances. "Ike" says it rains too much up there to make good wheeling at this season of the year.

WHEELMEN NOT AFTER CENTURY RUNS. - The San Francisco Call, 01 Jan 1898