AND NOW FOR MARKET STREET.

The Wheelmen Will Demand the Bituminizing of the City's Main Thoroughfare.

Except on the Blocks Nearest the Ferry the Smooth Pave- ment Would Answer All Requirements.

Talking of Paving Bush Street to Make a North-Side Boulevard to Correspond to the New Folsom Street.

The Progressive Organizations of the City Planning a Comprehensive Scheme for the Betterment of the Streets and Avenues of the Entire City - Secretary Knox Outlines His Ideas on the Subject.

That is the cry of the wheelmen, the Half-Million Club, the Merchants' Association and the other progressive bodies that are endeavoring to make San Francisco the city she ought to be. 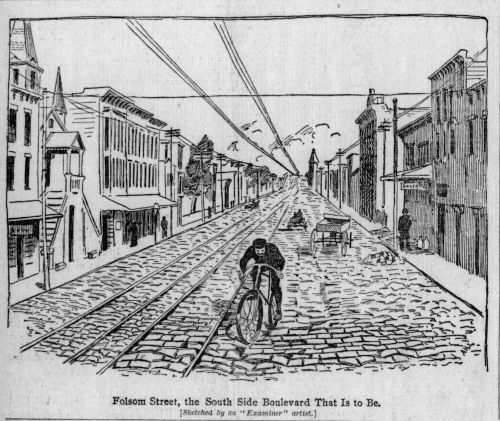 Folsom Street, the South Side Boulevard That Is to Be.
[Sketched by an "Examiner" artist.]

The matter of a boulevard on Folsom street, extending from the city front to the Mission hills, was settled by the action of the Street Committee the other day, when the resolution was passed appropriating $80,000 for the paving of Folsom street with bituminous rock.

To be sure, the bitumen is not down yet, nor is the money in the treasury available for the purpose, but all the Supervisors have expressed themselves in favor of the project, so there is no doubt about the adoption of the Street Committee's recommendation on the subject.

The success of the wheelmen and their allies in securing the Southside boulevard has excited other sections of the city, and a very general movement for the improvement of the streets is imminent.

"If a Southside boulevard, why not a Northside boulevard?" asks the resident of the Western Addition. Bush street is vacant since the withdrawal of the phantom car which was supposed to preserve the fantastic rights of the Sutter-street Company to obstruct that street with its old rails. Bush street, with the exception of the first hill, from Grant avenue west, has no severe grades, and if it were properly paved every bicycle rider and driver in the city would feel a great deal better. As it is, a man on a wheel or in a buggy who desires to go out into the Western Addition has to come far to the southward, dodging a block this way or a block that, or risk breaking his vehicle or crippling his horse among the declivities of streets that never were properly paved and are now entirely out of repair.

Years ago when they first began laying asphaltum in San Francisco the "silurians," as some one happily named the citizens who resented anything progressive, called it a "poultice pavement."

Golden Gate avenue was paved only in the face of fierce opposition and only after repeated experiments had demonstrated the feasibility of having a street with a pavement a little less hard than basalt blocks. Of course all the old arguments against the pavement in the residence part of the city have been exploded. There is no heavy traffic on them. The new pavement is clean and the cost, considering the wear and tear on vehicles and the veterinary surgeons' bills, is much less. So a movement to make a boulevard of Bush street is among the certainties.

MARKET STREET IS NEXT.

But first of all Market street must be paved smoothly. With the possible exception of a block or two at the very foot of the street trucks heavy enough to damage the pavement are the exception. If the laws were enforced compelling wagons to have tires wide in proportion to the weight, the heaviest trucks used anywhere could be driven over a bituminized street without making the least impression.

The visitor to San Francisco naturally passes up Market street first and gets an impression of the city from the rock-paved thoroughfare. Even when the basalt-block pavement is kept at its best - swept clean and repaired as soon as the level is disturbed, which is very soon - it is unsightly and hard for horses and vehicles necessarily. Market street should be one of the show avenues of the country. With the handsome business blocks that have been erected in late years and are now in the course of building, many more of which will soon be erected no doubt, and with its splendid width and great traffic it would be easy to make it one of the attractions of the city. The heavier vehicles should be banished to Mission or Howard streets by an ordinance prohibiting their traveling more than one block on Market. This would leave the great artery of the city free to the cable roads, the bicycles, the carriages and lighter sorts of trade wagons.

In a recent communication on the subject of good streets Marsden Manson, President of the State Bureau of Highways, said:

"In street pavements the first requisite is cleanliness, second noiselessness, third durability. Only on great thoroughfares, subjected to the traffic such as that of the lower end of Market street, Sansome, Battery, Steuart, Third, and streets carrying similar traffic, should the third requirement, namely durability, displace the first, cleanliness. For streets of lighter traffic I either an artificial mixture of asphaltum, fine gravel, pulverized limestone or of bituminous rock is the best wearing surface. 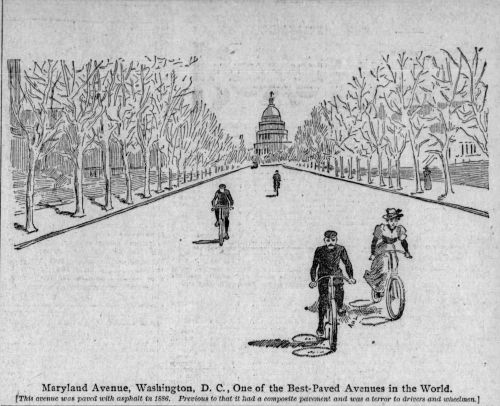 Maryland Avenue, Washington, D. C., One of the Best-Paved Avenues in the World.
[This avenue was paved with asphalt in 1886. Previous to that it had a composite pavement and was a terror to drivers and wheelmen.]

"It would only require honest and intelligent work to make San Francisco the best paved city in the world. There is no other city having the advantages of freedom from frost and abundance of the best paving materials known to the science of engineering."

With a pavement such as that described by Mr. Manson Market street would be as handsome a business thoroughfare as there is in the world.

On this subject Mr. Manson wrote another sentence embodying a project that will go with that of paving Market street with bituminous rock. He said:

"The great thoroughfares of San Francisco ought to have put in them permanent subways for sewerage, water, gas, electricity and other conduits."

With such conduits the constant tearing up of the streets and the constant patching of the pavements whenever a water pipe springs a leak or a foot of sewerage gives away - incidents of constant occurrence in San Francisco - would be done away with and the city would get its full wearing capacity out of the pavement.

WHAT THE WHEELMEN PROPOSE.

The organizations interested in the improvement of the thoroughfares of the city do not propose to rest satisfied with merely a street here and a street there decently paved. They have a comprehensive scheme for the improvement of the whole city, and such victories as the conversion of rocky, uneven Folsom street. into a bituminized boulevard are merely incidental steps in the general plan of progress. Naturally Market street, the most important thoroughfare of the city, must be put in shape first. Improvement of parallel streets and avenues leading into it will follow in due time.

Thomas R. Knox, Secretary of the State Good Roads Convention, gave this as his idea of the improvements which should be carried out in the near future.

"In addition to Folsom street, which it is proposed to make a Southside boulevard, there should be other streets improved that would give access to and from all sections of the city. For instance, East street, for a portion of its width, clear along the water front; then Jackson street from the water front to Kearny street, which latter thoroughfare should be paved with bitumen from Jackson street to California; Montgomery street from Market to Jackson; Montgomery avenue for its entire length; Post street from Montgomery street to Van Ness avenue, from which latter point it is already paved; then Steiner street for its entire length, while Van Ness avenue should have bituminous pavement from one end to the other, and Eleventh street should afford a route leading from that grand avenue of the Western Addition, Folsom street, and the Mission.

Every mail brings additional names to the EXAMINER petition for good streets. The wheelmen intend to have the name of every man who rides a bicycle or drives a horse in San Francisco before it is finally presented to the Supervisors. The ladies who ride have taken it up and are circulating petitions among their members to swell the list. It will certainly be the largest petition ever presented to the Board of Supervisors in San Francisco. The following are some of the additional names to the petition: