A writer in the New York Evening Post suggests a few cautions to be observed by those intending to buy a bicycle:

Up to the present time the velocipede in this country has been used almost entirely in cities, and but very few have given them a trial on our country roads, though there is no longer any doubt of their utility in rure. As yet no machine is provided with protectors to keep the dust and mud from off the back; and this is one of the most important improvements that can be made. For from actual experience it has been found that one's back very soon gets a coating of dust over it, which is thrown up by the hind wheel; while for the front wheel there should also be a protector (fastened to the support of the wheel, to turn with it), to prevent that wheel from rubbing upon the pantaloons, a serious annoyance. The saddle should be as far down between the wheels as possible without coming in contact with them, and the support for the front wheel, to which the handles are attached, should incline backwards, so that the center of the cross-bar at the top shall be at least nine inches from a perpendicular drawn through the centre of the front wheel. For it is obvious, and experience has proved it to be so, that more force can be exerted and a greater speed more easily attained if the body is thrown well back and the whole frame kept nearly straight, than if the legs are forced up and down in the position that one assumes while sitting in a chair. In this latter position he may press hard enough to raise him from the seat, but in the former the machine itself must give before he can be moved by pushing. The ingenious arrangements for supporting lanterns on some machines are a waste of time and expense: better some sort of clamps to secure a light umbrella in front when the sun shines hot, or if it rains, as well as clamps, or the like, for fastening a traveling bag on the rear, for we must look forward to next summer, when so many excursions and trips into the country will be made on these machines.

Before purchasing any machine, but particularly the cheaper ones, examine them closely yourself, or if not a judge of good mechanical workmanship, ask a friend to do it for you. Many defects are concealed by the coatings of paint, particularly in the castings and forgings; and a machine that is weak in any point is a dangerous one to use in fast riding. Be sure that every bolt is properly secured by nuts that cannot be shaken off; they should be riveted on to the bolt, for they will soon work loose if not so fastened. The crank should never be keyed on to the shaft but fastened on to a square head.

The manufacturers at present are pocketing immense receipts at the expense of the excited and uncautious public. A good machine can be made to order under the direction of almost any intelligent mechanic for a sum much less than is charged for any now in the market. 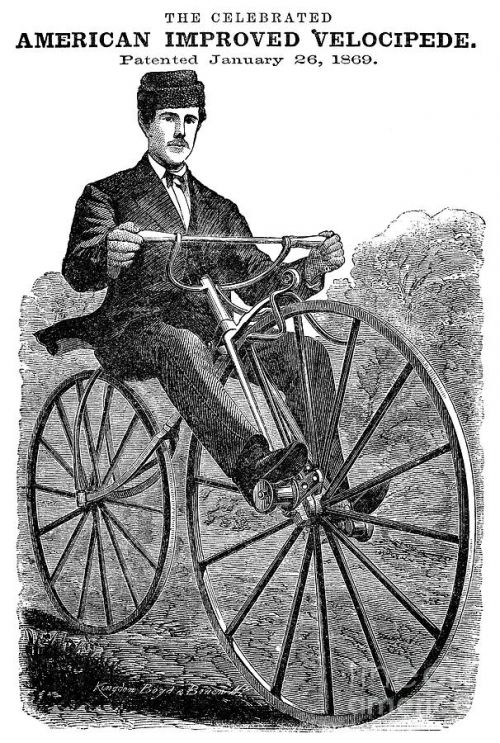