SIXTH in Series of Sketches, Accompanied by Photographs Found in Garrets and Homes of San Joseans Who Were Devoted Followers of Sport in Early Days of the Cycle. 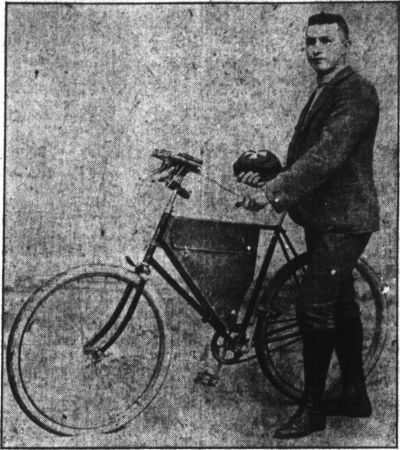 VICTOR A. HANCOCK, Another cycle pioneer.

VICTOR A. HANCOCK, manager of the Auditorium Skating Rink, "bubble" driver and prominent Elk, was another pioneer of the bicycle, although not a member of the Garden City Wheelmen of San Jose. He was a resident of San Francisco when the cycle age dawned, and, together with his brother Frank, took to the "silent steed" like a duck to water. For several years he devoted his best energies to the cycle, and probably has had more adventures while following this sport than most riders in this city.

For four years, when cycling was controlled in America by the League of American Wheelmen, he was engaged in compiling a road map of practically every road in California, and which at that time was, and still is, recognized as one of the best of the kind ever compiled in this State. He traveled more than 10,000 miles awheel in securing the facts and figures and other data contained in this invaluable wheelmens' guide.

The most interesting experience in Mr. Hancock's whole cycling career was his race against time across the Sierras for the romantic purpose of supplying the Brotherhood of Railway Trainmen of Wadsworth, Nev., with programs for a dance. This was in '94, during the A. R. U. car strike, which had tied up practically the whole railroad system of America.

Pedaling Across the Sierras.

The principal celebration of the Fourth of July at Wadsworth, Nev., '94, was a ball by the Harry Wilson Lodge, No. 313, Brotherhood of American Trainmen. This ball was a social event at Wadsworth, and the lodge had arranged that the equipment should be complete. An order had been sent to San Francisco for badges and souvenir programs.

The printing was finished. The souvenir programs were made in representation of the end of a railway car. Opening the door on the platform, the program of dances was discovered. When the time came for the shipment of the badges and programs the strike of railway men had begun and no delivery either by mall or by express was possible. A telegram was sent by the San Francisco printers to the Harry Wilson Lodge advising the members that the printing could not be shipped.

"Do Your Best." "Do the best you can," came the answer by telegraph, and the printer conferred with Victor A. Hancock on what was the best that he could do. Victor Hancock rode a bicycle, and his brother Frank was also a wheelman. Victor said he believed that the trip could be made to Reno by wheel, and that he and his brother would attempt it.

The attempt was made, and successfully. The programs and the badges were packed on the bicycles. A couple of extra tires and a few newspapers were included in the loads, and on July 1 at 10 a. m. the Hancocks started for Sacramento by boat. The boat arrived in Sacramento a little after midnight and at 1 o'clock a. m. of July 2 the wheelmen started on their long ride to Reno, 244 miles from San Francisco.

The night was intensely dark, The riders wheeled cautiously across the bridge and were speeding along the road when they saw dimly a camp by the side of the highway. Perceiving several horses in the camp, the wheelmen desired to pass without frightening them, so they alighted and were walking quietly, rolling their bicycles by their sides, when they were suddenly confronted by a man with a shotgun and surprised by a command to halt. They stopped, but when the man with the gun saw their wheels he explained that he had to be on guard, as an attempt had been made the night before to steal the horses. He permitted them to resume their trip.

The road was easy to Newcastle, which was the breakfast place of the wheelmen. Thence to Auburn the road was rough and hilly and the heat was intense, the thermometer standing 105 degrees in the shade. From Auburn to Clipper Gap the road was still uphill. Then the Hancock brothers rode on the railroad ties to Colfax, where they slept for the first night.

Leaving Colfax at 5:30 o'clock in the morning. they passed through Dutch Flat, Alta and Gold Run. These towns had not received the daily papers after the trains had stopped and were hungry for news. While the brothers rested the hotelkeepers read the newspapers aloud to the assembled population the news of the strike. At Emigrant Gap they stopped for dinner and then pushed on to Cisco. The road was rocky and steep and very little riding was possible. At Cisco they weighed and Frank had lost 13 pounds and Victor 11 in the two days of rough riding.

The next day was July 4, the Day of the Ball. There was a long trip yet to make. At 5 o'clock in the morning they started again, and, taking to the snowsheds, managed to ride between the rails for more than ten of the fourteen miles to the summit. At Summit, 7000 feet above the sea level, a single newspaper was sold for $1, four men making up a pool by contributing twenty-five cents each.

The wheels had to be carried over snowdrifts fifteen feet deep and around huge boulders in the trip from the summit to Donner Lake, a distance of only two miles, yet a descent of 1000 feet. Still the wheelmen enjoyed the sport of snowballing on the Fourth of July. The six miles around the lake were covered in twenty-one minutes and a quick trip was made over good roads into Truckee, where a crowd of trainmen had assembled, having been notified by telegraph of their coming. The railroad men eagerly bought copies of the newspapers for big prices.

In Reno On Time.

Without long delay the Hancocks started at 10:30 o'clock, climbed a five-mile hill, slid down another, pedaled a steeper six miles, crossed the State line, rode through Verdi and then dashed over eleven miles of good roads into Reno, stretching their legs at the hotel at 3:30 o'clock. Cheers were sounded for the wheelmen by an enthusiastic throng gathered on the streets to greet them.

The programs and the badges were delivered in good order to the Secretary of the lodge of the Brotherhood of Railway Trainmen, who took them by handcar to Wadsworth, thirty miles distant. The bicycle riders were the lions of Reno. Their last newspaper was sold and they were invited to Wadsworth to the ball, but they decided to go instead to the home of relatives in Virginia City. When they left Virginia City on the 8th they carried many valuable letters back across the Sierras with them to San Francisco.