A New Track Being Prepared for Those Who Ride on Bicycles.

One of the Pretty Roads in a Not Much Traveled Over Section.

“The Commissioners," said Superintendent McLaren of Golden Gate Park yesterday, "are putting the finishing touches on a road specially set apart for the use of bicycle riders. It is south of the speedtrack and opens from the north drive just before reaching the track. It is a little over a mile long and at the west end joins the main drive that runs to the ocean beach. It will be ready in a few days, and will, no doubt, prove a great convenience to those who ride on the wheel.

Eventually this special road, which is twenty feet wide, will be extended east to Conservatory Valley, and then it will be a fine road for bicyclists. It is the purpose of the Commissioners to provide a particular road for the bicycle-riders, who are becoming very numerous. That is, we do not want to force them to take any particular road, but we want to educate them to the necessity of following in the lines that we propose to lay down for them, and to show them that it is dangerous to a mingle with all kinds of teams on a general road. I want to say that we do not anticipate any trouble with members of regularly organized bicycle clubs, but the trouble will be with the novices who are just learning to ride. That class always insists on going wherever it pleases, regulations or no regulations.

It is our intention to establish a footpath for pedestrians, a main drive for teams of all kinds and a road for bicyclists. Whether we can carry out our ideas remains to be seen. There is a very pretty road in the park that passes through a most romantic spot, which, I am sorry to say, is not patronized as much as it deserves to be. 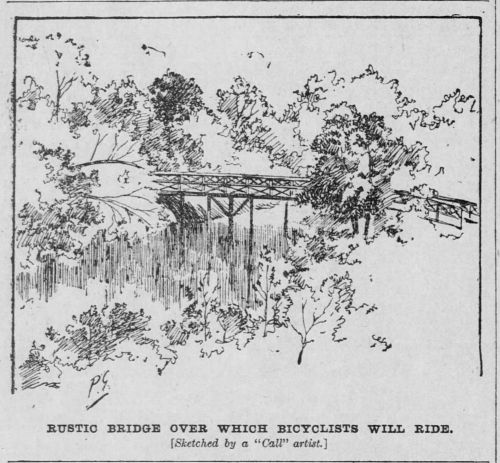 RUSTIC BRIDGE OVER WHICH BICYCLISTS WILL RIDE.
[Sketched by a "Call" artist.]

The road to which the superintendent alluded is indeed a charming one. It commences at the north side of the north drive, a very short distance from the signboard which conveys the information that "This is three miles from the Baker street entrance to the park," and the bicycler who wishes to turn into it is advised of its existence by a large sign on which is painted:

THIS PATH MAY BE USED
FOR BICYCLES.

This path, well macadamized, about fifteen feet wide, is meandering, and passes through a young forest of pine trees, the odor of which at this time fills the atmosphere with a most delicious fragrance. It is slightly undulating, but not sufficient at any place to fatigue one who knows how to ride an iron steed. As the rider advances he comes to quite a pond, the home of the croaking bullfrogs whose music on moonlight nights fills the air.

Across this pond there is a substantial rustic bridge. At either side of the eastern end of this bridge there is a tall pine, like a sentinel on guard, and on the edge of the pond on all sides are evergreens, whose boughs bend low to meet pond-lilies that appear on the surface. A little to the south there is an unfinished arched rustic bridge, intended at some time to connect with a footpath leading to the main drive. In its unfinished condition it enhances the beauty of the romantic scene. Then from this point may be heard the roar of the broad Pacific in the distance.

A rush over the bridge and a dash over a bit of road and the bicyclist finds himself on the great ocean boulevard. Beautiful as the spot around the rustic bridge is by day, it is charming on a bright moonlight night. Did the bicyclists but know this road better, it is safe to say that many would take it in preference to the main drive with its many teams. The park yesterday was crowded by all classes of people, who listened to the music, watched the animals and the birds and gazed at the wonders in the new museum. The flowers, which are now in full bloom, were admired by the fair sex, and every one seemed to be happy.

T. C. Lawson has donated to the museum a number of curios from Alaska, and these were on exhibition yesterday.

Commissioner Austin stated that the work of arranging Conservatory Valley for the band stand will be commenced with the next fiscal year. “The people's park should be beautified more than it is now, but to do this requires more money than is allowed us at present. The Supervisors should be made to see the necessity for allowing more money than they are allowing us. They should take into consideration that every acre of land we reclaim means increased cost to maintain it in order.

The cars running to Sutro Heights and the ocean beach did a rushing business to enjoy the sights and the refreshing air.