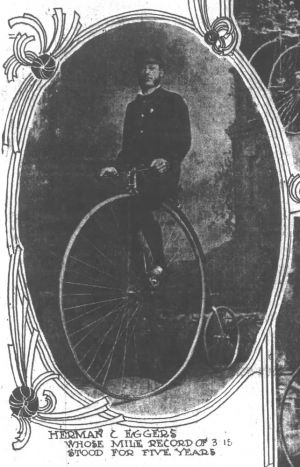 The first so-called championship race was held in December, 1878, in the Mechanics' Pavilion. The race was for one mile, and was won by E. D. Woodman in 4 minutes, 53 seconds. On the same day the five-mile championship was won by Fitzgerald. In November of the same year there was a three days' meet, without rest, which was won by H. C. Eggers, who covered a distance of 523 miles. Fred T. Merrill finished second, and A. A. Bennett came in third. Although Mr. Eggers won some five hundred dollars as his first prize, he was too true a sportsman to accept it, and the entire amount was devoted to charity.

The track was six laps to the mile, and being inclined toward Mission Street, was unsafe. The machines ridden were heavy affairs, with plain bearings, and short, straight handles, — far removed from the light, graceful easy-running wheels of today. There is a story told that, during this meet, Edwin Mohrig, who was in the five-mile championship, stopped in the middle of the race to roll up his trousers, which were continually being caught in the spokes of his wheel.

With the existence of two clubs, record time-makers sprang into being. The first recorded time was made by Herman C. Eggers of the San Francisco Bicycle Club on November 24, 1881. It was a mile in 3:15, made on the old Bay District track, then used for horse racing. The track was in consequence softly rolled. No cinder tracks such as modern cyclists use could be found then.

Eggers' record stood for five years, for besides making the first recorded time, he went to the front with flying colors in the first three-day contest ever held in San Francisco. There has never been one in which greater interest was displayed. It began November 29th, and ended December 2d. The men entered were Bennett, Merrill, Boyston, Eggers and Dunbar. The entrance fee was $50 and the trophy $500.

Eggers was the newest rider having ridden only nine months at the time of entering for this race, and he had not had the proper training; nevertheless, he made 546 1-6 miles in those three days, resting but three hours and a half the entire time.

"Don't forget that one-sixth," Eggers said. “It was worse than the whole 500." In this race he beat F. C. Merrill, [maybe Fred T. Merrill] a professional, by thirty-one miles, and the $500 was donated to the charitable institutions of San Francisco; but he was the victim of an exceedingly undesirable state of affairs. Having entered the race against a professional he became one himself, which was the last thing he wished and which he tried earnestly to alter. He had not counted the full cost of that race. However, his fellow clubmen took up the matter for him, and appealed to the National Association of Wheelmen [maybe this is the League of American Wheelmen?] to have the title set aside. The Olympic Club also came to the rescue, and owing to their combined efforts, Eggers was reinstated in the club as an amateur, to his own delight and that of his friends, although the National League took pains to state that it was the last petition of its kind that would be considered by them under any circumstances.

Fred Russ Cook lowered Eggers' record to 3:05, which time was lowered in turn by Frank D. Elwell, who made a mlle in 2:49.

Herman Eggers Will Be in Sunday's Parade With the Contraption He Rode in 1879.

Frank E. Carroll, chairman of the bicycle day committer, has issued a general invitation to any one who can ride a bicycle to be on hand for the big parade, which is to start from the McKinley monument at 1 o'clock. The parade will be led by the officials of the day, among whom will be Herman Eggers, the man who won the six-day race in the Mechanics Pavilion in 1879. Eggers will ride the identical wheel on which he won that famous event. 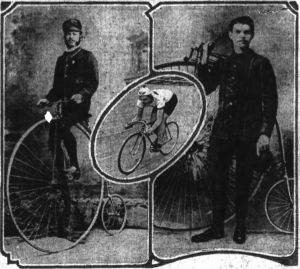 Here's a couple of the old high wheel boys. On the left Herman C. Eggers is pictured with the wheel which he rode in 1879 and will have in the run today. Then there is C. C. Hopkins, who will be on hand, and the insert is of Hans Ohrt, with one of the modern bikes.

It will surely bring back old memories to see Herman Eggers mounted on his high wheel, speeding along with the modern bike. Eggers is going to ride the same wheel he used away back in 1879 to win a race at the old Mechanics Pavilion. C. C. Hopkins, who gained fame with the high wheel in 1885, is another that is going in the run. Fact is, old-timers who were famous in their day and who will participate are so numerous that they would make a list two columns long. 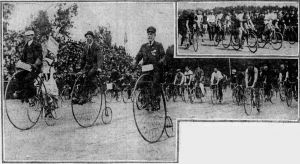 The main picture shows the parade entering the Stadium in Golden Gate Park with (left to right) Robert Russ, Dr. Thos. L. Hill and Herman C. Eggers riding the "ordinaries." The other picture is the start of the two-lap race, which was won by Champion Hans Ohrt.
From OLD AND NEW CYCLISTS HELP TO CELEBRATE BICYCLE DAY - The San Francisco Examiner, 10 Apr 1916

These honored bicyclists were Herman C. Eggers, who rode a wheel on which he won medals in 1878, and Herman wore the medals to prove it; Dr. Thomas L. Hill, an old Bay City Wheelmen stand-by, and Robert Russ, a pioneer of the Olympic Club Wheelmen. Behind them came others, old but on more modern wheels. Judge Frank H. Kerrigan, James W. Mullen, Wilbur Knapp, Tony Delmas, Walter Foster, Walter Fawcett, George Tantau, Emil Languetin, Fowler, A. D. Plughoff, Charlie Howard and others of that vintage too numerous to mention, plugged along as they did twenty years ago. Behind them came riders of all sizes, ages and mounts, ranging in age from little Frankie Carroll, son of the director general of the day, to "Pop" Hopkins, who wore false whiskers to hide the wrinkles in his face. Jack Leavitt, accompanied by Mrs. Leavitt and a troupe of little Leavitts, rode side by side and brought out a big burst of applause when the procession passed in front of the grandstand in the stadium. A swarm of present day clubmen formed the rear guard.

There were Herman Eggers, six day winner of 1879, and Bradley, Hill and Russ, with their old high wheels, a center of curiosity for the younger generation, many of whom saw the pioneer form of bicycle for the first time; and there was a good sized bunch on motorcycles from the S.F.M.C., making a social run along with the bicyclists. Several outfits with Smith motor wheels also took part in the parade, and one amusing arrangement was a boy's coaster wagon, with automobile style body, propelled at a good rate by a motor wheel in the rear. Then there was the first Dayton motor bike seen in San Francisco, and several other interesting novelties, as well as a long tandem and some of the "freak" wheels of the old days.