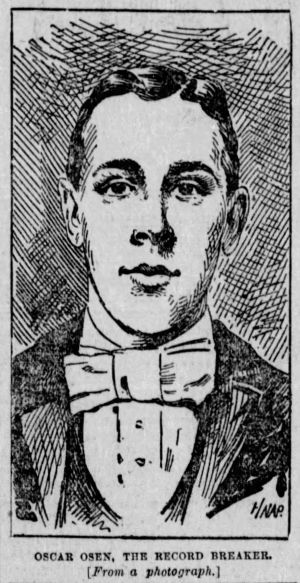 FROM FRISCO TO SAN DIEGO

Oscar Osen of San Jose Does It Inside of Four Days.

The First Night Brings Osen to Paso Robles - Monday Night He Got to Santa Barbara and Tuesday Night to Los Angeles - Over 150 Miles Day With Wind, Mountains and Sand.

Over 600 miles in four days, and part of that over the mountains, is a wonderful ride for a wheelman. It was done, though, by "Kid" Osen, the San Jose road rider.

Swain of the Acmes made the run to San Diego in ten days, and wheelmen considered that a good ride.

Oscar Osen left the California Cycling Club at Twenty-second and Folsom streets a quarter of an hour after midnight last Sunday morning and a little after 10 o'clock Wednesday night he rode into San Diego.

On reaching Gonzales Carey and Jarman turned back, but Hubbard of the Garden City Cyclers, who joined the party at Gilroy, kept on to San Luis Obispo, thus accompanying Osen 140 miles. At Paso Robles the "Kid" got a good night's rest.

Hubbard gave up the pacing to George Osen at San Luis Obispo, and the big brother kept Oscar company all the way to Los Angeles, two big days' ride.

Thirty miles this side of the southern metropolis, James Vidy of the Californias met the Osens and pulled them into town, the party being increased by many Los Angeles riders before reaching town.

Grant Bell, who was a famous road rider back in Minnesota, took charge of young Osen at Los Angeles and kept him company on the last day's ride. At Oceanside they were met by George T. Lemon of San Diego, who acted as guide through a night as dark as sin. That last day of 168 miles was made in 18 hours and 40 minutes, which includes the time for meals.

S. O. Blodgett of Arroyo Grande on the second day's ride writes this of Osen: "He was in pretty good trim, a little stiff, perhaps, but able to reel off many a mile this day. Weather fine, cool, calm. I paced him a mile or so and put him onto a wrinkle in the road to Santa Maria."

Brockman of Gonzales paced for twelve miles, Ulrey of King City ten miles and Janney of Paso Robles nine miles. Other wheelmen on the way also rode some distance with the record-maker.

Five ranges of mountains had to be crossed by young Osen, and from one to eight miles of walking was required on each, with much stiff hill climbing besides.

When it is taken into consideration that the three days, twenty-two hours and twenty-five minutes includes three good nights' sleep and nearly fifteen stops for meals, and most of the 641 miles over strange roads, the record is indeed wonderful.

Oscar Osen rode a twenty-five pound Phoenix bicycle, built by the Stover Manufacturing Company of Freeport, Ill., and the same wheel he has been doing all his road-riding on. "It stood the racket" and came through in good condition.

Oscar Osen's itinerary for the big ride was as follows:

On his arrival at San Diego Osen was met by a reporter of the EXAMINER, and Oscar summed up his ride thus:

"I feel very tired naturally, but I am in very good condition otherwise and made the trip much better than I expected. The roads from San Luis Obispo south I found in horrible condition, with much sand to buck against. The weather has been fine and I have enjoyed the trip immensely."

Osen appeared to be in good condition and after a rubbing down he partook of a hearty supper, meeting local wheelmen at the restaurant, who complimented him upon his feat. Osen will remain to take part in the L. A. W. races at San Diego.

Oscar Osen and His Phenomenal Overland Trip - The Los Angeles Times, 28 May 1894