In response to a circular mailed to every member in the State, notice of which was also given in this column last week, a number of prominent cyclists, members of the League of American Wheelmen, met at 108 Golden Gate avenue on Thursday evening, 18th instant, for the purpose of forming the California State Division of the league. The organization was perfected by the election of P. E. Haslett as Secretary and Treasurer to serve until his successor shall be elected, as the by-laws of the division may provide when adopted. R. M. Welch was selected for appointment as Chief Consul to serve until the result of the election to be held in March next shall be announced from the national headquarters of the league, which under the rules will be about the 1st of May. A committee was appointed to frame by-laws for the governing of the division.

He will be landed this morning, however, and during his fortnight of stay here will be the guest of the San Francisco Bicycle Club, which has great honors in store for him. Yesterday evening a committee of the club, consisting of B. H. Patrick, H. A. Greene, Harrison Houseworth and John W. Gibson, went down the bay on the tug Millen Griffith and bade him welcome. They were not allowed to board, but convinced their illustrious brother of the warmth of the greeting awaiting him from the deck of the tug. Chief Consul Welch of the League of American Wheelmen was also of the party. Mr. Stevens will be fittingly escorted to the club's rooms this morning and the first entertainment in his honor will be a banquet given by the Oakland Ramblers this evening. Next Thursday the club will entertain him, assisted by the Olympic Club, at the latter club's rooms, and the officers of the two clubs are to combine in banqueting him. Another banquet is to be given him by the L. A. W., and a score of minor entertainments are being planned to fill in the time of his stay.

Wednesday, May 12, the Bay City Wheelmen tendered a banquet to the newly elected officers of the California division of the L. A. W. It was a most enjoyable affair, about one hundred wheelmen being present. President Hill, of the Bay Citys, acted as toast-master and introduced the chief consul, Mr. R. C. M. Welch, of San Francisco. Welch made a very clever little speech, reviewing the life of the bicycle and the L. A. W., and wound up by proposing a toast to the L. A. W., which was heartily responded to. Speeches and songs followed in rapid succession, conspicuous among the latter being the following original song by S. Booth, Sen.:

O, all you members of the League, Whose lungs are good and strong, Come join with all your voices in The chorus of my song; About a gallant wheelman and A comrade good and true. Elected district consul of The L. A. W.

This fine American wheelman All of the modern time.

No shining stars nor golden bars Attest his racing fame, Nor do the cycling chronicles His victories proclaim. He holds no envied "record" Of a mile, or of an hour; His record is "good fellowship " When out upon a tour.

In the heroic days of old, Before great Caesar's birth. To be a Roman consul was The grandest thing on earth. But not great Julius himself. The day that he did squelch The Roman Senate, was a prouder Man than Consul Welch.

To win the Roman consulate. And stand where Caesar stood, Great Pompey and his friends went down Amid a sea of blood; And so to gain the lofty place Which he adorns to-night. Our modern consul comes victorious From a gallant fight,

Among his brave competitors Who came to sudden grief Was Mohrig of the Drill Corps, And erst their gallant chief. Though wearing proudly on his breast Full many a prize, I trow His glistening stars and golden trophies Could not save him now,

From this fine American wheelman, etc.

"The San Franciscans" also had Their champion candidate. And fain had seen young Harry Greene Crowned with the consulate ; But though his comrades mustered strong And true across the bay. And though hero of many a fall. His worst fall was that day,

By this fine American wheelman, etc.

Other competitors there were, But all to fame unknown. Who never spoke in others' praise. But loudly sang their own; And others still who trusted in Their monumental cheek For victory, but they, too, were Compelled to eat the leek,

By this fine American wheelman, etc.

And so we come to celebrate His triumph here to-night. With speech and song to welcome him Victorious from the fight]; To lay our vows of fealty And service at his feet. And wish that as Chief Consul The success might be complete,

Of this fine American wheelman, etc.

Messrs. Meeker and Hill, of the Bay Citys, and Kennedy, of Denver, recently took a trip to the Geysers, and upon the whole had a most enjoyable trip, though they had some startling adventures. Messrs. Tittle, Booth, and Welch recently took a trip to Livermore and returned the same day, a distance of about 75 miles; they report walking along the mountain ridges as very bad, though most of the way they had fine wheeling and some splendid coasts. Messrs. Cruikshank, Dubois, and Blinn, of the Highland Park Wheelmen, recently took a trip to the Yosemite Valley. They say they came across a man who had never seen a bicycle before and took them for a traveling circus. 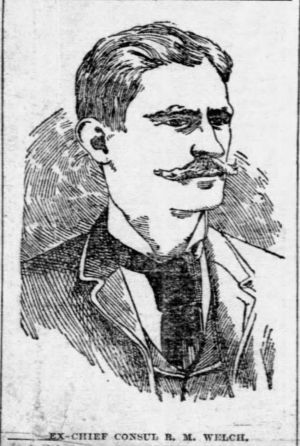 Of the Bay City Wheelmen, Robert M. Welch is one of the best known. As Chief Consul of the California Division, League of American Wheelmen, he has won the respect and admiration of the riders of the Coast. He has filled that office for two years and a half in such a manner as to place the division, in point of numbers and financially, among the largest in the United States. He is an excellent road rider, haying done that much sought after “century" run - 100 miles in a day. His longest trip was in 1887, when he rode to Los Angeles, reaching San Jose the first day, 73 1/2 miles beyond the second day, and completing the ride of 460 miles in nine days, including one day spent at Santa Barbara. He rode or walked the entire distance, although sympathizers along the road frequently proffered the use of their teams. He has served several terms as an officer of the club. [missing] ...dent his rulings were fair and impartial, and he has the happy faculty of placing any matter before the club in such a manner that all may understand.

'Cyclers Take Trip to Walnut Creek. Last Sunday Messrs. Welch, Burmester and Bliss, of the Bay City Wheelmen, made the trip from this city to Walnut Creek. The 'cyclers went by way of San Pablo creek to Lafayette, and then to Walnut Creek, returning through Moraga valley, Redwood canyon and Jack Hayes canyon to Oakland.

The run was sixty-three miles. The bikers found some very hard bills to climb, but the ride through the valleys was delightful. In describing the trip one of the riders says: "The trip along San Pablo creek was very interesting, but the Moraga valley and Redwood canyon, before reaching Cape Horn, is one of the prettiest rides, and the surmounting of the mountain between the point and the Jack Hayes canyon one of the toughest but most romantic climbs that can be found, I think, in that vicinity."

familiarly known to the wheelmen of the State as "Uncle Robert,”

WHEELING. - A Pastime Which Has Become Popular With Olympians. - The San Francisco Call, 24 Sep 1893

Not a run, but rather a "climb and coast" this time was the programme of the Bay Citys yesterday. The 8 o'clock boat to Sausalito found the boys all ready for the ride, which they started at Ross Station, and walked and climbed to the very top of the mountain, about two hours from the station. A register in the book at the top, lunch, a survey of the really magnificent view from that point, the great ocean on one side, San Francisco and San Pablo bays on the other, with the pretty valleys at the base of the mountain, and then the descent. It may have taken two hours to reach the summit, but considerably less than half that time was necessary to get back. The scorchers went on via Corte Madera to Sausalito, while the others took the train at Ross Station.

The San Francisco Club members were not particularly hard road-riders or racing men, but led a jolly existence of good fellowship. A few of the more athletically inclined grew discontented at the conservative government of the club, and in September, 1884, drew out, and formed the Bay City Wheelmen, with the purpose of promoting race meets, and maintaining a high reputation for road-riding.

They joined the Pacific Coast Athletic Association, but withdrew from that to constitute the California Division of the L. A. W., formed in 1886, with C. M. Welch as Chief Consul. [I think that should be R. M. Welch - MF] Bicycle contests had hitherto been held in conjunction with general athletic events. From this time bicycle matters improved. Bicycling in California in 1892 - The Overland Monthly, June 1892

It was not until 1886-87 that any noticeable improvement began to be made in the development of the sport. The growth at this time was the direct result of the organization of the California Division of the League of American Wheelmen, which was formed on Feb. 18, 1886, with Robert M. Welch as Chief Consul. Little interest was displayed in the organization of the Division, but by the end of the first year of its existence, through the efficient management of Mr. Welch, the membership had increased from 86 to 210.

Robert Welch will referee the Indoor Tournament at the Mechanics' Pavilion.

R. M. Welch of the Racing Board will undoubtedly suspend F. C. Heineman and E. C. Barley from the L. A. W. for one year for racing against each other last Sunday when he had expressly advised them not to do so. Several of the papers have taken this up as though it was a matter of great concern. Had the riders in question been crackerjacks it might have been a loss to the sport; but they are only ordinary class A handicap riders at best, with minor reputations for speed. It is well that the racing board can use them as "terrible examples to the racer who dares disobey its mandates. Chairman Welch has proved himself by long odds the most efficient representative of the Racing Board we have ever had out here, and his decisions are much admired for their impartiality and fairness.

He helped write this: Racing rules, 1895 / prepared by the Racing Board.

Funeral services for Robert M. "Bobby" Welch, retired banker and prominent clubman, will be held tomorrow morning at 10 o'clock at St. Mary's Cathedral. Entombment will be at Holy Cross Mausoleum.

Mr. Welch died suddenly Wednesday night in his room at the Bohemian Club, where he had made his home for many years. He was a bachelor and has no immediate relatives in San Francisco.

Mr. Welch, who was born in Baltimore in 1856, came to San Francisco as a young boy and in 1883 became an employe of the San Francisco Savings Union, one of the predecessors of the American Trust Company. He rose to the position of vice president, cashier and manager of the organization, retiring as secretary in 1926.