Eighth in Series of Sketches, Accompanied by Photographs Found in Garrets and Homes of San Joseans Who Were Devoted Followers of Sport in Early Days of the Bicycle.

E. E. YOUNG, ANOTHER SURVIVOR OF THE DAYS OF THE "ORDINARY."

E. E. YOUNG, a representative of the Pacific Manufacturing Company, and formerly manager of the Santa Clara Valley Mill and Lumber Company, was also a pioneer cyclist, well known in this vicinity in the eighties. The photograph presented here today was taken after a ride from Santa Cruz to Sacramento; by a photographer in the Capital City.

That run was made about '84, but the adventures with which Mr. Young met in the journey across the mountain roads are still fresh in his memory. This cycle was one of the first to invade mountainous districts and instill terror into the hearts of artless rural equines. The auto today never had more trouble with unsophisticated horses on narrow mountain roads than did Mr. Young on this trip.

One animal that was suddenly confronted with the strange apparition of a human being sailing along on a silent revolving thing preferred in a panic to take its chances with a 200-foot precipice. The driver of this rig luckily did not follow his horse and wagon, and, strange to say, did not attempt to make the rider pay for the accident, stating that he was equally to blame for owning such an animal. Portions of this rig were afterwards removed from the top of a redwood tree, but the buzzards got the horse.

Barring two or three accidents on down-grades caused by the tendency of the little wheel in the rear of the machine to fly up and strike the rider in the back of the head, the journey was safely made.

Mr. Young was in the butcher business in Santa Cruz at this time, but removed to San Jose about eight years ago. Since that time he has become quite prominent in the lumber business, and resides on Thirteenth street, in the Naglee Park tract. 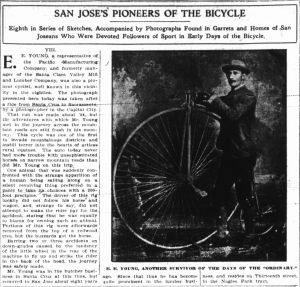