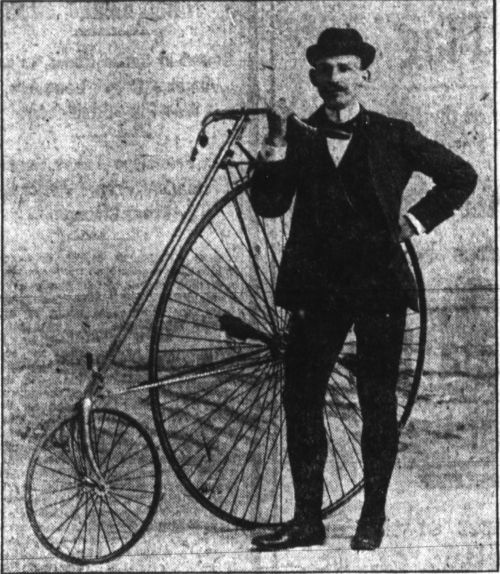 HERE is another sample from the pile of photographs of San Jom merchants in ancient cycling garb discovered in a garret by a Mercury reporter. Undoubtedly his host of friends in this city will recognize in the photograph of "Dusty" - as he was known to his clubmates of the Garden City Wheelmen in the eighties - the features of J. R. Lamkin, the well-known furnishing goods merchant who formerly conducted a store at 78 South First street.

The two-wheeled instrument standing at his side, and which he is supporting through considerable muscular effort, represents the first improvement made in the old high "ordinary" bicycle such as the one formerly owned by Al Col and which was represented in yesterday's Mercury. The only difference in the two machines is that the little wheel in this instance is set in front of the big wheel instead of the rear. This was done by the manufacturers because of the disposition of the first machine made to capsize in a forward direction when it met the least obstruction or when the rider was going down hill, as either Mr. Col or Mr. Lamkin could testify if they chose.

Mr. Lamkin navigated the affair depicted here with fair success. He was very proud of it at the time that it first came from the shop, as you can tell by his pose in the photograph. The trousers which adorn his nether limbs were the "real thing" in the way of cycling "togs" in those days. They were blue and constructed of a sort of elastic material so that they did not hamper his movements when he pedaled his queer steed along the main streets of the city. The yellow stripes down the side of his trousers do not show in this photograph.

In the many club runs held by the Garden City Wheelmen Mr. Lamkin and his machine always constituted the rear guard of the "bunch," consequently he always rode in the thick of the dust kicked up by those in front, and the condition of his face and hands was often such that his own friends could not recognize him. In this manner he gained the reputation of being able to collect more dust during a ride than any other half a dozen riders and acquired the sobriquet of "Dusty."

"Dusty" at this stage of his career was clerk in the store of O. A. Hale & Co. Although he was by no means a "wonder" on the bicycle, he was always most popular with his clubmates and was twice elected to the presidency of the organization when its membership numbered close to 700.

A few years later he entered into partnership with Joe Edwards and opened a gentlemen's furnishing goods store at 78 South First street. Later he bought Mr. Edwards out, and until about two years ago the store was known as Lamkin's Haberdashery, and as such was patronized by many of the well-dressed young gentlemen of the town.

Mr. Lamkin is now a prosperous merchant of Hanford.