WILL CAMP WITH HIS WHEEL. - AN INGENIOUS DEVICE OF P. J. BAILEY. - San Francisco Chronicle, September 07, 1895

WILL CAMP WITH HIS WHEEL.

A Bicycle Arranged for Convenience in Traveling Through the Hot Interior Valleys.

A bicycle rigged up for camping in the hot interior valleys is the latest novelty. There is only one in existence, and it is the handiwork of Philip J. Bailey, a lad living at 222 Silver avenue, who intends to participate in the Admission day celebration at Sacramento, and is, going to make the trip to the Capital City on his wheel.

To keep off the sun he has arranged a canvas-covered canopy on a frame-work that is strong, while it is light and neat. On the front support is fixed a gong, which makes almost as much noise as the one on the fire patrol wagons. On a shelf over the hind wheel a small coal-oil stove is firmly secured. This is for cooking on the way, and to the upper part of the canopy are fastened a small frying pan, coffee pot and water can. Another rack is for knife and fork and spoon. 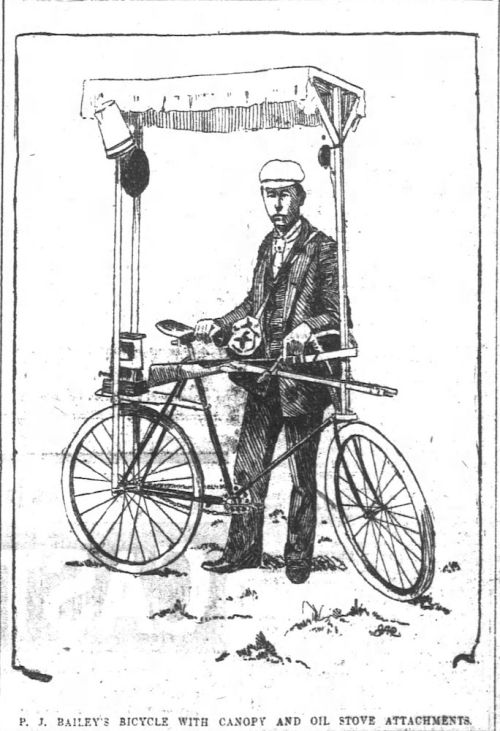 A rack parallel with the saddle bar holds the young camper's rifle. His blankets, in which certain necessaries will be wrapped, he will carry strapped over his shoulder, together with a water canteen. Thus rigged, Mr. Balley thinks he can make the trip to Sacramento very pleasantly.

"I am going to start Saturday night," he said. "I will go to Stockton on the boat with two companions. From there we will wheel to Sacramento and join in the fun there. Later on we will go to Gilroy and spend several days camping in the hills."

Bailey made all the "extras" for his bicycle himself. Their neatness and evident strength bear witness to his mechanical skill. Everything is snugly fastened into place by various devices that keep the many "etceteras" from rattling.

The young man is arranging a stand for a student's bicycle. This will serve for the student to carry his books in, or can be swung around and used as a book rack, so that the rider can read as he travels. Another device in course of construction is a bicycle arranged for the convenience of physicians.