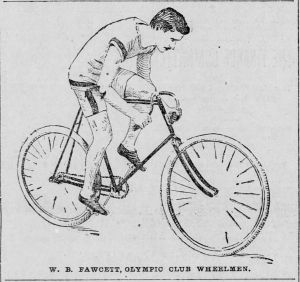 Over ten thousand people jammed the stand and both sides of the horse track, which had been put in fine condition for the contests. All kinds of bicycle riders were given a chance to show their speed. From Hans Ohrt, the national amateur champion, down to little 10-year-old Willie Fenn, who won the juvenile race and could hardly stand when he dismounted, every winner was greeted with uproarious applause, but the real events of the day were the oldtimers' races.