In the second heat Ed Mauls cut out the pace and held the lead for a few laps, when George Fuller came along with an astonishing burst of speed and took the winning position, which he held to the finish, defeating his opponents handsomely in 2 min. 33 3-5 sec. Fuller is only 14 years of age and for a youngster he is rated as being an exceptionally fast rider. 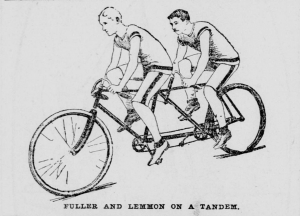 FULLER AND LEMMON ON A TANDEM.

There are several tandem teams in the Olympic Club Wheelmen, prominent among whom were the Fuller brothers. Since Frank Fuller went East C. F. Lemon has taken the rear seat, and with George Fuller on front they make a speedy class A team. It seems to me they could easily lower the existing record of 2:10 and a fraction, made by the Reliance team, Griffiths and Boyden, at San Jose on June 1. Clark and Smith of the Garden City Cyclers made 2:09 at Santa Rosa May 9, but that record was never allowed.