The Bay City Club and the Highland Park Club Compete.

An interesting bicycle race occurred on Washington's Birthday, the event being a 50-mile road race from Gilroy to Menlo Park. Teams from the Bay City Club, of San Francisco, and from the Highland Park Club, of Oakland competed for a prize of a bugle, to be won by the club gaining the greatest number of points. There were six entrees, [sic] three from each club. Sunday afternoon nine of the cyclers rode in company from San Jose to Gilroy. Within seven miles of Gilroy a swift, gravely stream obliged eight of the riders to climb a couple of fences and pack their machines on their backs over a railroad trestle. One cycler tried to ford the stream and stood on his head in the middle, much to the hilarity of the rest. The start was made from Gilroy at 7:25 A. M., Monday morning. Elwell and Booth, of the Bay City Club, led the way, closely followed by Churchill and Bowman, of the Highland Park Club, while Tittle and Roseborough [Rosborough] brought up the rear. The railroad bridge was taken by all but one rider, who waded the creek. When 12 miles out of Gilroy, Churchill took a severe tumble, breaking the handle bar from his machine, and thereby putting him out of the contest. The remaining five covered the 50 miles without further accident, arriving at Menlo Park in the following time and order: Elwell, 3:31; Bowman, 3:44; Booth, 3:55; Roseborough, 4:06; Tittle, 4:09. The Bay City Club making 19 points, while the Highland Park made 6. The former club were therefore declared victorious. The best time ever made in this country for 50 miles is 3:29; so considering the railroad bridge to be crossed, and about 10 miles of rough road the time made was good. Elwell, the first in, is a young man, six feet in height, who weighs 175 pounds. He has only been riding a short time, and is considered a phenomenal rider.

This was Frank D. Elwell's first race. Below, see a georeferencer map from 1876 showing San Jose to Gilroy. They would have ridden Monterey Road from San Jose to Gilroy, which nearly perfectly fits the road on the 1876 map, and still follows the railroad. The railroad bridge over the "swift, gravely stream" was where Monterey Road crosses Llagas creek, now slower due to the Chesbro dam. 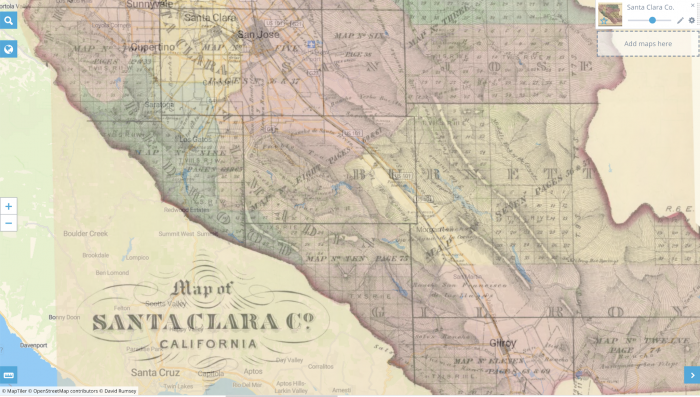