A SIXTY-MILE BICYCLE RIDE IN THE REDWOODS OF MARIN COUNTY. - The San Francisco Examiner - 25 May 1895

A SIXTY-MILE BICYCLE RIDE IN THE REDWOODS OF MARIN COUNTY. 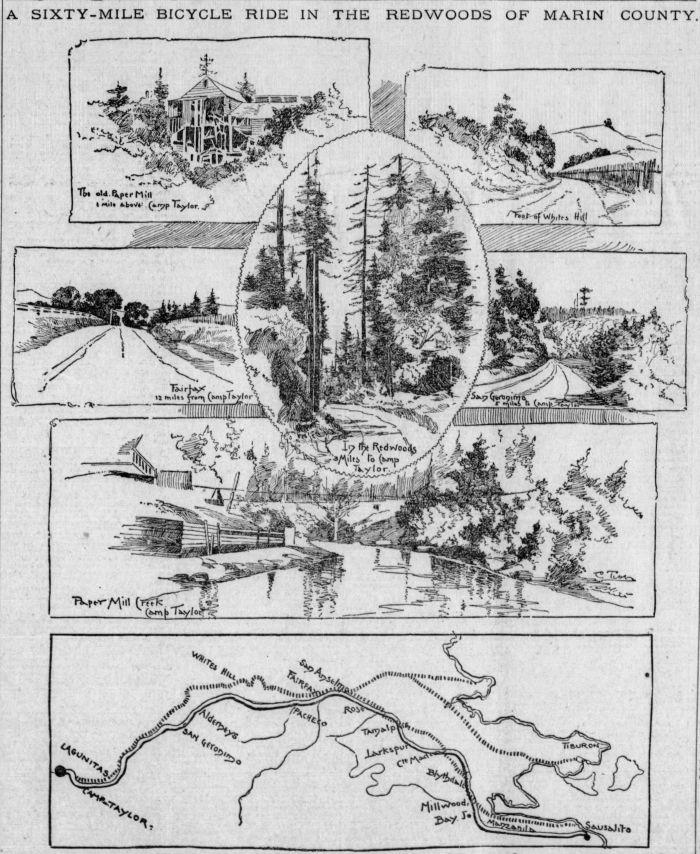 LEAVING this city via the Sausalito ferry the wheelman enjoys a trip up the bay which gives him a comprehensive idea of the beauties of the marine views in that direction. Leaving Sausalito the road, while in fair condition, is generally of a rolling character, and the majority of the riders take the train over this part of the route, leaving it at Ross station.

From here the road is level and in the best possible condition, being watered during the summer season. From the station take the road to the east, which leads to the right over the railroad track and across the bridge. It then follows the line of the railroad on to San Anselmo, one mile. Leaving the latter station the rider goes on over the slight incline to the left, and is then on a road which leads nearly due north to Fairfax, one mile and a half.

From Fairfax to the foot of White's Hill the road is in excellent condition for the greater part of the distance, which is about two miles and a half. When White's Hill is reached the rider encounters the only drawback to this otherwise enjoyable trip. The hill is one mile in length from the foot on either side to top, and is practically unrideable either up or down.

From the foot of the hill into San Geronimo, a distance of three miles, the rider passes over a road, perfect as to surface, and sufficiently undulating to give added zest to the enjoyment of the trip. This part of the ride takes one into the heart of the redwood district and discloses many beautiful vistas, which cannot be had except in this part of the State.

At San Geronimo, which is merely a cluster of small houses, the first opportunity for the rider to get off the proper road is presented. The main road seems to lead on to the right, a hundred yards beyond the bridge, which is on the outskirts of the town, but as the rider nears the signboards he sees another road continuing in the same general direction in which he has been traveling, and the board pointing in that direction says: "To Camp Taylor, five and one-quarter miles." From San Geronimo for two miles the road is in bad condition, owing to the rains of last winter, but for the next three and one-quarter miles into Camp Taylor it is at its best. This part is slightly undulating, and the rider dashes down one incline at a rate of speed which carries him to the top of the next.

The hotel at Camp Taylor is not visible from the road, consequently the cycling wayfarer must not pass the sign, which contains the necessary directions by which to locate it. The old paper mill, a mile above the hotel, will well repay a visit after lunch, as it is & most picturesque ruin.

Here is that map, georeferenced onto an 1892 Official Map Of Marin County, California.: 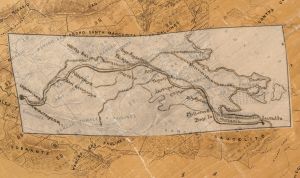 Here is that map, georeferenced onto a modern map, from Openstreetmap: 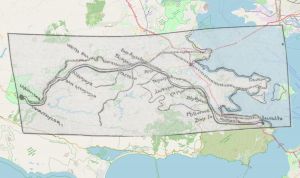