Besides the constitution and bylaws of the league and other details usually contained in a hand book, this pamphlet embraces several interesting and valuable papers, among which are "A Racing Retrospect " by Robert Assheton Smyth, "Touring” by W. M. Meeker, “Rights and Privileges (of Bicyclists)" by Charles E. Pratt, “Tours” by R. M. Thompson

The Pavilion races will introduce the new handicapper, R. A. Smyth, this being his initial attempt. 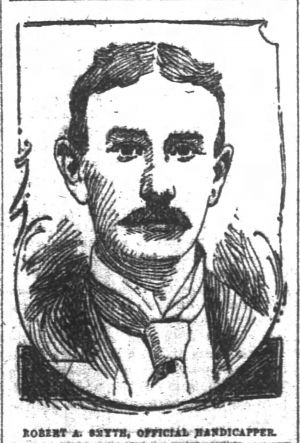 ROBERT A. SMYTH, OFFICIAL HANDICAPPER
THE SPEEDY CYCLERS. - Interest in the Indoor Tournament. - The Affair Promises to Be a Big Event. - Edwards, Ziegler, Coulter and the Big Ones to Race - Club Gossip. - San Francisco Chronicle, 16 Feb 1895

Robert A. Smyth was a reporter and editorialist, here writin WHIRLS OF THE WHEELS. - The San Francisco Examiner, 18 Apr 1896.

Robert Assheton Smyth, sporting editor of The Call died at 4:30 o'clock yesterday afternoon at the French hospital. He is survived by a widow mother and one sister, Miss Elizabeth Smyth. The funeral services will be conducted by Rev. Dr. Benson of St. John's Episcopal church at Dierk's ! undertaking parlors, at 2:30 o'clock Monday afternoon. The interment will be private.

Robert Assheton Smyth was born at Castle Martyr, County Cork, Ireland, 42 years ago. He was the son of Robert Smyth, a noted Irish huntsman and a prominent figure in the sporting life of his native country, who came to San Francisco about 30 years ago, after a brief residence in Australia. Since that time San Francisco has been the family home, though Robert Smyth Sr. was for many years in charge of the famous Tevis stock ranch at Bakersfield.

Robert Assheton Smyth attended the Lincoln school in this city and as a boy entered the service of the Wells Fargo express company as a clerk. While yet a boy he attained more than local fame as an athlete. He was one of California's first "century' bicycle riders, and after the introduction of the modern safety bicycle became one of the first and best known California road racers. He quickly established his right to a place in the front rank of western endurance race, riders and was one of the best known members of the old Bay City Wheelmen. After retiring from racing, Smyth was for several years one of the most skillful and successful bicycle handicappers in the west.

"Bob" Smyth, as he was popularly and affectionately known, entered the newspaper field about 17 years ago. True sportsman that he was, his inclinations and abilities drew him naturally enough to the sporting page. His unswerving honesty, his loyalty to duty and his love for all manly sports soon won for him the same place of prominence in the newspaper world that he had occupied in the field of amateur sport. He became sporting editor of The Call 10 years ago, filling that position with honor to himself and credit to this paper until the illness that was so soon to prove mortal took him from his desk two months ago.

One of the keenest and most conscientious critics of pugilists and pugilism in this country, "Bob" Smyth's written opinions were eagerly sought and universally respected by followers and patrons of that branch of sport. Sportsmen and the general public gave ready recognition to the sterling honesty of the sporting writer, whose work was never colored with prejudice, who had no price and who held his obligations to his paper and the reading public above every personal consideration.

Throughout the world of sport he was accorded the sportsman's dearest meed of praise that he was "square."

The untimely death of "Bob" Smyth robs the world of sport of a figure whose absence will emphasize its prominence; it robs those who knew him of a friend. To know “Bob" Smyth was to love him. Loyal he was and brave, a true man, but unassuming, gentle and modest as a woman. The coarser side of a life with which he came in daily contact for nearly 20 years left no soiling touch on him. His own life was simple. He was devoted to his work, his aged mother, his sister and their home. He lived ever true to the traditions of a gentleman, and so he died. Without complaint he bore the ravages of the disease that wore him quickly to the mere shadow of a man. Without fear he faced death. The smile that had drawn little children to him, the smile that had opened to him the hearts of men, was on his face when he fell into his last sleep.