The much talked-of 100-mile ride of the California Division, League of American Wheelmen, took place June 1st and proved a great success. The route was from this city straightaway to Hollister. Sixty-five bicyclists started with the intention of completing the full distance, and of this number fifty-three finished. The start was made from Twenty-first and Mission streets at 5:22 A. M. It was intended to start at 5 o'clock sharp, but the ever present photographer consumed some time in getting a picture. Between San Francisco and Millbrae, seventeen miles, Captain Meeker took his men along at such a pace that they regained the twenty-two minutes lost at the start so that Millbrae was reached on schedule time. The hotel man was quite unprepared for such a crowd at breakfast, and some of the riders suffered in consequence. The pace to San Jose seemed rather fast and took a great deal out of some of the riders. Dan O'Callaghan and others turned it up at San Jose. 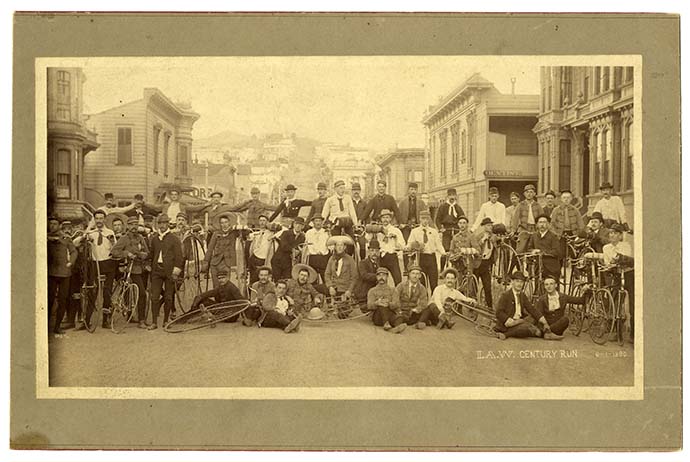 All along the route the people were on the lookout for the riders, and they were given a big reception at each town. The run had been extensively mentioned in all the County papers, but the general idea was that some kind of a race was in progress, and at each stop the riders were asked who's ahead? etc. The small number of falls taken was remarkable, as the machines were always close together and some of the riders were either unaccustomed to riding in a crowd or were reckless, as they paid no attention to where they rode. San Jose was reached at 11:30 o'clock.

After leaving San Jose the pace was set by Captain Meeker, without regard to the schedule, and as the roads were perfect the condition of the riders improved after the severe run of the morning. The first twelve miles out of San Jose were ridden in 1 hour and 5 minutes.

Some miles outside of Gilroy the riders found the road to be blocked by a stream of water twenty feet wide and six inches deep. The safety men rode through on their low machines without difficulty, as the bed of the creek was quite firm. Some of the strong, ordinary riders also rode across without mishap, but a prominent local rider came to grief in the middle of it. He fell in and had to remove his stockings and hang them on his back to dry while riding the next few miles. This furnished the only amusing incident of the ride. The Bay City wheelmen and the Garden City wheelmen were the best represented clubs, the former having twenty-four members finish and the latter ten. The special train provided by the league left Hollister at 9 o'clock, and no one would think that the jolly crowd on board had ridden hard all day. Except in one or two cases they showed no signs of fatigue, and the return journey was spent in singing and recounting the many incidents of the day.

This 100-mile run is the most successful ever promoted in America, the nearest approach to it being the great century run held on June 8, 1889, from Orange, N. J., to Philadelphia, when ninety riders started and forty-six finished. The percentage of finishers to starters does not approach the California run.