(Redirected from W. A. Terrill) 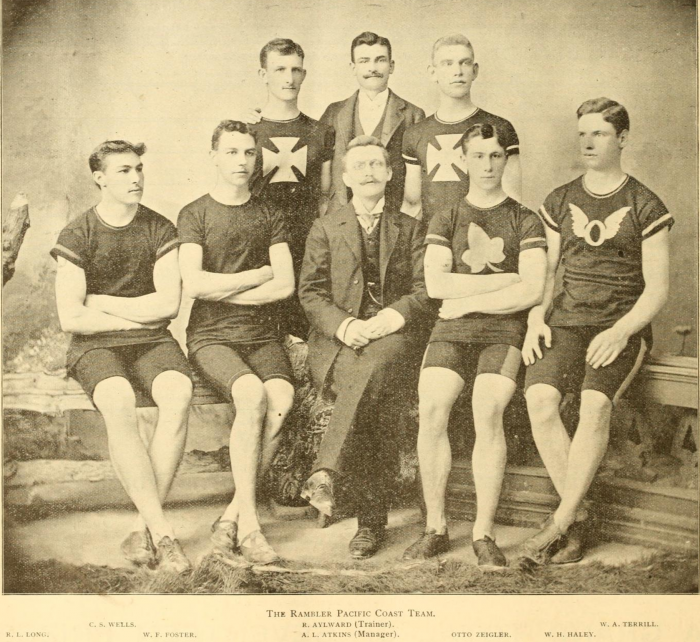 W. A. Terrill of the Bay City Wheelmen is making a splendid showing on the National racing circuit. At Syracuse, N. Y. on June 10, he won the mile handicap from eighty yards in 2:06 1-5 against such men as Bald, Murphy. Cabanne, Titus, Macdonald, Coulter, Ziegler and men of equal prominence. At the same place on June 12, against the same competitors, he won a mile handicap from sixty-five yards in 2:11 3-5. As the season progresses he will develop even better form.

“Big Bob," as he is known, has ridden on our track before, and during the past season earned the title of coast champion. "Bob" followed the national circiut for a short time as a member of the California giant team. He is a very large man, and moves about on his wheel as actively as any smaller man; always good-natured and smiling, a gentleman and a thorough racing man.

M. Pognon thinks the Terrill brothers of this City, who went to France recently to race, will do well. "If they are not fast enough to compete with the best riders they can ride against the second or third best. Riders are graded over there according to their abilities, and a third-class rider in France will make more money than a champion in America. Why? Because there are more meets, the attendance is better and consequently the track managements can afford liberal prizes.

"We will say next Sunday the Terrills want to race in France. Where will they ride? Well, let's see. Here is a meet at Marseilles, one at Bordeaux, one at Brussels, three or four in Paris, besides numberless road races. They can find out who is going to ride at each place, and then allot themselves where they think they will have a chance of winning, and not go up against Morin, Bourrillion, Revierre, Champion, Garin or those people, who, if they are not speedier, at any rate have the pacing teams and knowledge of the tracks down so fine as to be almost unbeatable."

Charlie Wells, "Bob" Terrill and Harry Terrill of this city have not begun circuit chasing yet. Wells makes his home in New York and takes in all the meets roundabout for 200 miles or more, returning with his prizes won. Last week Wells and Harry Terrill won a tandem race from the best men in the country. Arthur Gardiner and his team mate, James Bowler, were in the race, but fell easy victims to the big Californians, who practically sprinted the mile, riding the distance in 1:55 4-5. Wells, aside from his racing, devotes some of his spare time to pacing the middle distance cracks. "Bob" Terrill is permanently engaged by one of the largest organizations here, and is captain of his team, which does pacing for Fred Titus and Edouard Taylore. Harry Terrill takes in all the roundabout meets and is fast making for himself a name, and very seldom loses out in securing a prize. His brother "Bob" does not engage in racing, at present, but as the season advances will in all probability be seen on the path again.

"The Stelling family lived near Dolores Street, then the Terrill's. Bob and ------ ? were members of the Bay City Bicycle Club and became well known among the bicycle racers, which was quite a popular sport at that time. ..." Knave: Some Old Families