'The misspellings are really something on this one.

The Twenty-five-Mile Race Won by F. A. Elwell in splendid Style.

The twenty-five-mile race between the teams of the Bay City Wheelmen, the Oakland Ramblers and the San Francisco Bicycle Club, for a handsome silver pitcher and a drinking cup, came off yesterday. The course chosen was the triangular road which runs around San Leandro. The teams, consisting of three representatives from each club, were as follows:

The start took place at 11:30 A. M., and the inhabitants of San Leandro turned out en masse to see the sport. For the first ten miles or so the men kept in a bunch, with the exception of Harroldson, of the Oakland Ramblers, whose bicycle ran foul of a rock, and gave him a header that entirely settled what chance he had for the race. At the twentieth mile Elwell and Larzelier shot five miles ahead, and the race between the two for the last five miles was one of the most exciting ones ever seen. First one would get a trifle ahead and then the other. At last, by a desperate effort, Elwell got his small wheel in front of his opponent and gradually increased his lead to a length, winning the race and trophies in the fine time (for road work) of 1 hour 37 minutes 20 seconds. Adcock was the third, some ten bicycle lengths behind, and Irelan was fourth, ten lengths behind him. 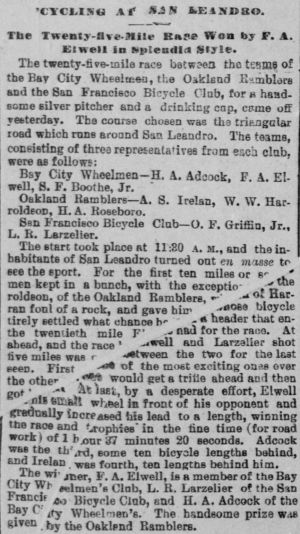