The San Leandro Triangle was a race course frequently used in the late 19th and early 20th centuries by bicycle racers, and later motorcycle and car racers. It used existing roads and landmarks to make a course which, ridden three times, equaled almost exactly 25 miles, a commonly-used unit of distance racing. Below are some original articles, maps, and a summary of the course.

There will be a fifty-mile race between five members of the Bay City Wheelmen and five of the Highland Club boys on February 22d, the course being from Gilroy to Menlo Park. The prize is a club bugle, to be awarded the club whose representative wins the race. Thursday, W. J. Bowman, Jerome Churchill and J. Blinn, of the Highland Club, were in this section making a fifty-mile road run. The course is from San Leandro, up the Hayward road, to the Lewelling road, to San Lorenzo; thence down the San Lorenzo road, via L. Stone, to starting point, a distance of eight and seven-eighths miles. One run, which was timed, was made in 34 minutes. The run will be an exciting one.

SOME GOSSIPY COMMENT CONCERNING THE RECENT ROAD RACE OVER THE SAN LEANDRO TRIANGLE.

SAN FRANCISCO, Feb. 24, 1893. — The first great race of the year — the twenty-five mile road race of the California Associated Cycling Clubs — was successfully run off over the San Leandro triangle on February 22.

"It was a perfect California Winter day. The gentlest sort of a breeze made the genial sunshine more delightful. The balmy air was perfumed and the green foothills a few miles eastward were the background of the inspiring picture presented by the broad, rich plain filled with orchards and pretty homes. Flowers blazed in every dooryard in town and country, and the apricot orchards were glorious in their myriads of blooms of pinkish white.

Amid such surroundings is found the San Leandro triangle, which is said to be the finest twenty-five mile cycling race course in America. Another advantage of it is that the whole community rather likes to have it put to this use, and is indulgent to the wheelmen. Every farmer will cheerfully turn out to give a racing rider full right of way." 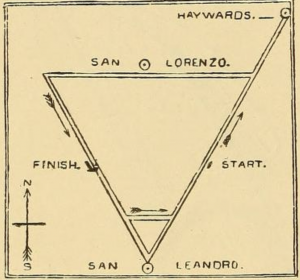 It surely was a perfect day. The weather had been clear for ten days before the race and the roads were in grand condition, although a trifle dusty. The riders generally were well trained.

Frank D. Elwell made his first appearance as a handicapper, and his work would have been quite good if the scratch men had shared the pacemaking as they should have done.

Griffiths, the winner, is a new man, and diligent inquiry failed to bring to light any performance on which to base a handicap. Consequently he was given the limit of 12 minutes. He is nicely built, and with proper preparation should be heard from again.

Faulkner, who established the new record of 1h. 19m. 4s., raced many times on the track last year, and won but one prize, second, in the novice race at San Jose on Thanksgiving Day. He is more of a road than a path rider.

WHAT A CHAMPION OWES TO HIMSELF.

The great disappointment of the race was the defeat of W. J. Edwards by W. F. Foster. Edwards retired at the end of last season the undisputed champion of the coast. To please some of his friends he started in the road race against his own judgment, and not having time to train properly the result was an easy defeat by a rider who could not approach him last season.

A champion owes it to himself never to race unless properly trained. In the first place the mind still retains its old training while the muscles have entirely relaxed, and the mind may call on the body to do more than it can perform, which may result in permanent injury. Again, the public at large do not take into consideration a man's condition, but simply see that he was beaten, and the latest winner basks in the sunshine of public favor.

D. L. Burke said recently that he would not come up here to race Edwards, and now he really has no reason to do so. He has beaten Foster easily, and Foster has beaten Edwards easily (apparently).

Edwards was at one time a racing protege of mine, and I feel keenly his defeat and the lack of judgment displayed in making him ride when he had so much to lose and nothing to gain by so doing.

This was the sixth twenty-five mile race contested on this course.

The second was arranged by the California Road Racing Association, and was won by Elwell in 1h. 38m.

The third was also arranged by this Association, and was won by the invincible, all-conquering Elwell in 1h. 37m. 2 2-53.

"Amid such surroundings is found the San Leandro triangle, which is said to be the finest twenty-five mile cycling race course in America. Another advantage of it is that the whole community rather likes to have it put to this use, and is indulgent to the wheelmen. Every farmer will cheerfully turn out to give a racing rider full right of way."

There are many mentions of the San Leandro Triangle" in media. There are 161 results for it in the California Digital Newspaper Collection, 392 results at newspapers.com and google returns 477. It was a common course. It was relatively flat - these bikes had no gears, and the racers were really fascinated with speed and distance records - and because it was pretty country at the time, and it was accessible from rail (Fruitvale Station in Oakland, near the current BART Fruitvale Station) and boat near the city of Oakland. The route to it, on the "San Leandro Road", AKA the "Haywards Road" was scenic and a nice spin for spectators. Later, motorcycle and car races were run over the course. 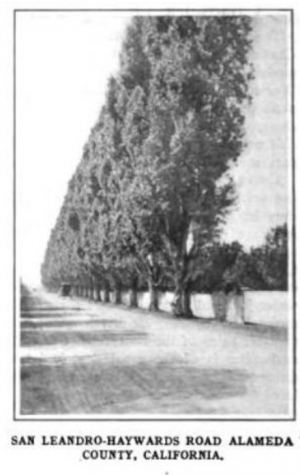 "A Picturesque Road.
The accompanying photograph gives an excellent idea of a portion of an automobile-haunted California road that runs between San Leandro and Haywards in Alameda county. The road is lined for miles and miles by well-kept orchards, and in many cases these orchards are protected by veritable hedges of tall poplars. The photograph shows a typical row of these picturesque trees, with an orchard on the other side of the fence."
THE AUTOMOBILE, March 4, 1905

Road names in the 1890s were completely different from now, for the region. Period accounts are inscrutable, for instance, from a report of Charles A. Kraft trying to break the "Coast record" for 20 miles:

Here is a course description, with maps: 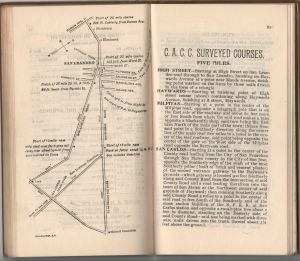 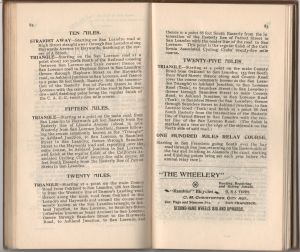 The route information below relies on these two maps:

Here is the 25-mile course, from the above book:

It becomes apparent that:

Note that there is a road-cut to soften the corner at "Ashland Junction" (Mission Bvd & E. Lewelling Blvd). They didn't have it, so go past that to the actual intersection and make the more acute turn, if you want to ride the course as they did. East 14th St changes its name to Mission Blvd after it goes under highway 238, southbound. It would have been called "Haywards Road" back then. 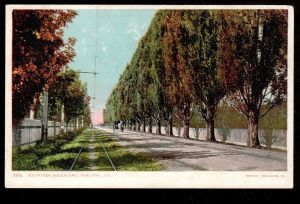 A lease for ten years from J. B. Marlin to the County of Alameda of a piece of ground for a windmill, tank, etc., in the San Lorenzo Road District, was, on motion of Mr. Dusterberry, accepted. 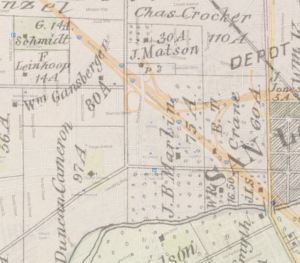 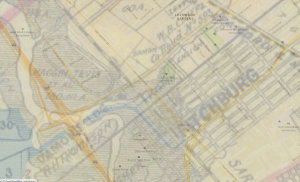 Damon Ave (which led to Damons Landing) became 66th Avenue, where the Oakland Coliseum is now.

In the 1880s and 1890s, when 'cyclers' were first riding and racing on these roads, the other traffic was horse-drawn, horses and pedestrians. Some sections are not as bike friendly as they once were. It's an industrial / urban neighborhood now. A local rider, Jason Hammon writes: "East 14th is not bike friendly through downtown San Leandro, but it opens up after about a half mile. Washington has a stretch just before San Leandro Blvd that might pose a problem too, because it goes under the train tracks and has no shoulder." 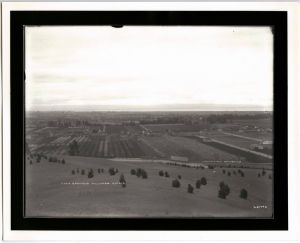 Here is a photo, taken from somewhere above the Dunsmuir-Hellman Estate, looking at what is now MacArthur Blvd ("Hollywood Boulevard") & Highway 580 ("Lincoln Highway"); "Orchards and homes in Elmhurst, California, looking west from the adjacent hills. Circa 1915 - From the Oakland Library History room. Hollywood Blvd is now MacArthur Blvd or the Freeway." - Dorothy Londagin, from the Oakland History facebook group. The start and finish of the San Leandro Triangle would have been just to the left, out of frame of the photo. This gives you a feel for what the country looked like at the time.

This was the end of racing on the Triangle:

TRUSTEES OF SAN LEANDRO PASS ORDINANCE TO THAT EFFECT.

SAN LEANDRO, August 18. - At the last meeting of the Board of Trustees of this city an ordinance was passed regulating the speed of automobiles, auto cycles, bicycles, etc., to eight miles per hour within the city limits. This prohibits cycle racing on the famous triangle and on this account considerable heated discussion was indulged in before the passing of the ordinance. An amendment was introduced allowing bicycle racing, but was voted down and the ordinance was passed as originally proposed.

Trustee Barberio opposed the measure, claiming that the revenue of the town would be considerably lessened thereby. For many years wheelmen have made their headquarters here and some of the best races that have been ridden in California have taken place on the San Leandro triangle. On Sundays, during the racing season, hundreds of cyclists were wont to congregate in the town. As a result of the ordinance, Trustee Barberio claimed all this would be stopped.