Meet on the Point Lobos Road, and Formation of a Club

Among the vehicles for rapid transportation which are now coming into favor in this country, where it has but lately been introduced, is the bicycle.

These machines are extensively used in some parts of England, and the first one imported from there was received in this city about six months ago. They are materially different from the velocipede, being constructed with one large front wheel and a small one behind, and, when skillfully handled, are capable of being operated with far greater ease and speed. Fifteen miles per hour is considered to be very fair average time over a good road, but in Europe, in match contests upon the race-track, a single mile has been made in 2:52 and twenty miles in one hour. The bicycle is provided with a cyclometer that registers the number of revolutions made per minute, by which means the distance is measured. It is not an especially bad machine to manage after a bit of practice, but the greatest difficulty experienced by the novice is met with mounting and dismounting, the bicycle being extremely apt at such times to fall down. Yesterday morning, by invitation of Loring Cunningham, a grand meet took place on the Point Lobos road, at which all the bicycles in the city, together with their owners, by whom they were ridden, were present. The object of the gathering was merely for practice, and for the encouragement and better promotion of the sport. The names of the gentleman, comprising eleven riders, who participated are as follows: Loring Cunningham, W. G. Barrett, R. de Clermont and two sons, James J. Searle, George Searle, George Strong, J. B. Golly, W. B. Land and M. Allen. The start was made at 8 o'clock from the old toll-gate, and the party rode leisurely, two by two, along the road to the Cliff House. One or two inexperienced riders were obliged to dismount and walk up the hill, but the others kept their saddles, and in some instances displayed much grace and skill in managing their automatic steeds, executing many rapid and difficult curves and evolutions. The time to the Cliff, a distance of some three and a half miles, was twenty minutes. Here the party, after partaking of a lunch, resolved to form themselves into a bicycle club, and organized temporarily by electing Loring Cunningham President and W. G. Barrett Secretary. A few of the experts then tried a ride along the sandy Ocean beach by way of experiment, but found the tide was too high to permit for that sort of amusement, and so, shortly after 10 o'clock, the bicycle cavalcade set out to return home, stopping at the half-mile track with the intention of trying a brush, but owing to its heavy condition no note of the time was taken. The best long run on record was made in England - 223 miles in less than twenty-four hours, allowing for stoppages. Mr. Cunningham, one of the local experts, some two months since made a run of fifty-two miles from this city to San Jose in seven hours, exclusive of halts by the wayside, and this is the only long run of any note performed in San Francisco. A number of machines ordered by gentlemen of this city are now en route from England, and it is the intention of the San Francisco Bicycle Club to increase and strengthen its organization and do its utmost to cultivate and disseminate the art of bicycle-riding.

From Point Lobos Road, An 1895 article on the history of today's Geary Boulevard:

To enjoy a ride over this road those who held the ribbons were forced to pay toll in going from the City at the toll house, which stood on the north side of the road almost opposite what is now known as Masonic avenue, the thoroughfare that leads to the Masonic Cemetery. The driver received a ticket, which he dropped at the second gate, which stood near where the road took a turn and was down grade to the Cliff.

The meeting point at the "old toll-gate" would have been at what is now Geary and Presidio, illustrated by the red arrow in this 1876 map, according to Vestiges of Lands End: 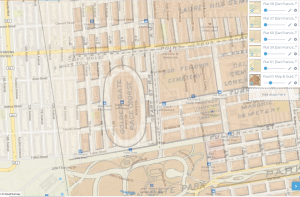 According to this 1882 Faust's Map & Guide Of San Francisco, the "half-mile track" where they considered "trying a brush" was here, occupying the land between 2nd to 6th Avenues, and Fulton Street to Geary Boulevard.