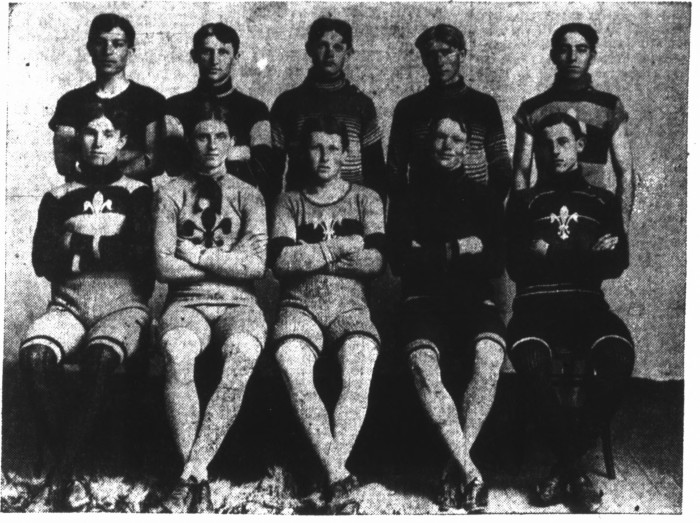 San Jose Riders Are a Surprise to the Other Cycling Clubs — Big Race Meet at Stockton Next Sunday.

THERE is nothing but praise among the the Garden City wheelmen for the members of the relay team which won the 100-mile relay race around the bay last Sunday. The record-breaking time in which the local riders circled the bay was an eye-opener to the clubmen from San Francisco and Oakland, who felt confident that either the Bay City wheelmen or the Oakland wheelmen would come off victorious. The victory was celebrated on Monday evening in the club rooms with “high Jinks,” at which the riders were lionized for the clever showing they made. Next season the local wheelmen will have a much better team than they had this year. Several of the riders who participated in the race Sunday are "green" men. The training they will get during the present season will give them experience, and at the same time will develop them physically. The team as it is now is the best that ever rode under the colors of the club.

From now on race meets will be held nearly every Sunday during the summer. Next Sunday there will be a big meet at Stockton. The chief event of this meet will be a team race for points. Each team will be composed of five men. The five riders who will represent the Garden City wheelmen in this event will be Waibel, Gray, Berryessa, Dieffenbacher and P. Maggini. The race will be for a $125 trophy. There will be several other events in which the Garden City riders will participate. On Saturday evening the annual meeting of the California Associated Cyclers will be held at Stockton. Officers will be elected and a schedule of races for the season will be arranged. H. H. Varney is a candidate tor reelection for the presidency and C. L. McEnerney is a candidate for re-election as secretary.

A week from next Sunday there will be a big race meet at Ingleslde, and forty or fifty of the local wheelmen will participate in a club run to that place. Several of the riders will take part in the different events. The chief event of the meet is a ten-mile Australian pursuit race for a trophy. Each team entered will be composed of five men. The local riders who will constitute the Garden City team have not been chosen as yet.