Masters of the road and path. 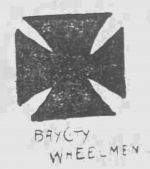 Just one door below Golden Gate avenue, on Van Ness, the widest and most fashionable thoroughfare in the city, stands an imposing frame structure not without architectural beauty. It is several feet back of the street line and has every outward appearance of being the home of a San Francisco millionaire. But on the big front door, the latchstring of which is always out, there is a plate on which he who runs may read, “The Bay City Wheelmen." Take your wheel in the side entrance and then stroll through the rooms. Elegant are they not? And well worthy of a club which counts among its members many of the best 'cyclists in California. But the Bay City's were not always so luxuriously housed, as a brief review of their history will show. 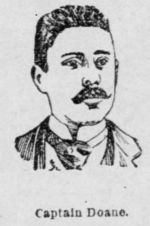 On September 1, 1884, a number of enthusiastic bicycle-riders met at the residence of Edwin Mohrig, formed an organization to be known as the Bay City Wheelmen, and elected the following officers: President, Edwin Mohrig; vice-president, George F. Day; captain, F. R. Cook. From the first the club was successful and its membership rapidly increased, its meetings being held at the residences of various members and the social character of the organization being developed to a degree exceptional with an athletic club. Meetings in private residences becoming inconvenient, the club accepted the invitation of Joseph Little to meet at his store on Golden Gate avenue. After Mr. Little retired from business, in 1885, the club rented the store, and there on February 18, 1886, was organized the California Division of the League of American Wheelmen. In June, 1886, the club moved to 202 McAllister Street, and for a while the boys were content. Early in September, 1890, 13 members of this club, throwing superstition to the winds, formed an organization under the laws of the State, and thus inaugurated an era of prosperity which has not yet reached its zenith. These enterprising men were C. A. Elliot, G. P. Wetmore, R. M. Thompson, F. W. Ray, S. Plummer, J. G. Cox, T. H. Doane, F. R. Cook, W. M. Meeker, T. L. Hill, C. N. Langton, C. W. Hammer and C. C. Moore. At a meeting of the new association on September 27, 1890, all the accounts of the old club were turned over to the incorporated body, and with 48 members the Bay City Wheelmen were born again.

Ten days after securing possession of the association's furniture the clubrooms were moved to 234 Van Ness avenue, which the house committee had fitted up in a very comfortable manner. There recruits began to swell the ranks, a "smoker" was held, followed by a party at Union-square Hall, and in a short time the club had outgrown its new quarters. In June, 1891, the house at the north west corner of Van Ness avenue and Grove street was leased, and refitted in great shape. Here everything seemed perfect, and for several months the members congratulated themselves on the possession of the finest bicycle clubhouse west of Chicago. Then a rival organization moved into a little better place. This may or may not have been the impelling motive, but at any rate the Bay Citys only a few days ago made another move, this time to the splendid home-like clubhouse they now occupy at 519 Van Ness avenue.

The Bay City Club has always been active in promoting races. On Thanksgiving day, 1884, at the Olympic Club games, Fred R. Cook won the mile race and put the record at 3:04, where it stood for a long time. On January 10, 1885, the club gave a tournament at the Mechanics' Pavilion, and on the 27th of the following March the clubs of San Francisco and Oakland united in a joint meet. In May of this year Cook covered 207 1/2 miles in 24 hours, then the best American record. A few days later Cook went to San Jose and made a quarter mile in 37 2-5 seconds, which beat the world's record. In July of the same year another tournament was held to defray the expenses of sending Cook to Springfield, Mass., to compete in the league races. He was disabled by accident, but managed to secure several trophies.

Meantime a club had been formed in Oakland and challenged the Bay Citys to a 50-mile road race. This was run on February 22, 1886, from Gilroy to Menlo Park, and was won by the Bay City team - Messrs. Booth, Elwell and Tittle. The first meet of the California Division, L. A. W., was held on September 9, 1886 - a run to Golden Gate Park and a race meet at the Bay District Park constituting the day's programme. On this occasion several records were lowered by members of the club. A Bay City man won the 25-mile race over the San Leandro triangle on Thanksgiving day, 1886, and in the following spring a team from the club almost beat the world's record in a country run, going to San Jose and return. [June 1, 1890, in a country run from this city to Hollister the Bay City wheelmen went through with 26 men, a greater number from one club than had ever completed a hundred miles in one day in America]. The many other victories won by the Bay City men in more recent races are too well-remembered to need recapitulation.

CHAT ABOUT THE CYCLE. - Organization and Growth of the Bay City Wheelmen. - The San Francisco Call, 02 May 1892