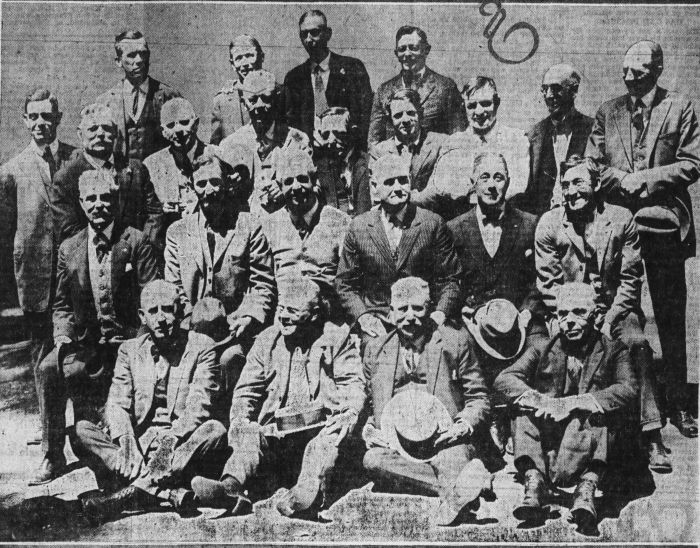 Many Champs Produced by Acme Club

More than 60 members of the old Acme Athletic Club of Oakland gathered at the reunion held at the home of Judge J. J. Allen and a great time was had talking over the old days when many of the members were champions of the track, ring, mat and bicycle.

As well as being the fourth reunion since the club disbanded some years ago, it served as a farewell party to J. Kitchen Jr, who with his wife will leave here on May 27 for a trip through Europe. Following the big feed, there were talks by old-time memKitchen Jr. [sic]

The Acme club, which disbanded in 1892, produced some great athletes, and many of its members are now prominent in the bay district. James T. Drew, chief of police of Oakland, joined the club in the fall of 1892, and he was one of the best 135-pound boxers in the business at that time.

KITCHEN WAS A CHAMP.

Ed Conley was a bit different from the other members, because he was a balloonist, and his most daring stunt was when he swung from his basket and hung by his toes in trying to save the life of a small boy who became entangled in one of the sand bag strings. He shouted to the boy to cling to the bag, but the youngster lost his hold and fell to his death just as Conley reached for him. The accident happened at Blair's Park.

Willis Sharpe, local business man, was a good boxer and bike rider. J. Hanifan was the champion handball player. Jim Coyne had a lot of fun at the reunion telling his old friends how good he used to be with the boxing gloves. He was a featherweight in those days. Tom Hawkins, who was in the lightweight class, always tried to go. Coyne one better in his stories, and the crowd had lots of fun.

Geo. Neice was president of the club for a time. He was also a bike rider, as was Charles Lutky. George Meihling was quite a wrestler and was an instructor of that sport for the Acme, Olympic and Reliance clubs. Theodore Schleuter was among the best bicycle riders in the club.

Myron Whidden, now secretary of the Oakland Lodge of Elks, was a member of the club and was one of the boys to play a trick on Jim Drew when he joined the club. George Simpson was a welterweight boxer.

DeWitt Van Court, now boxing instructor at the Los Angeles Athletic club, had many Acme members as his pupils. He and other members of the Acme club are great pals of Jim Corbett, and the Acme club will give a dinner to Jim when he visits here next month. Acme members who are now scattered throughout the State will attend.

Edward Dowdle was a member of the glee club and an all-around athlete, while Jim Slattery was good on the acting bars.

Bert Brown, now connected with the sheriff's office, held the Pacific Coast middleweight boxing title for a time, and Bert is still pretty good with the gloves. Bill Hughes held the coast welter title for a length of time.

Manuel Rose was about the best bike rider in the club. He was noted for riding in the Century Run traveling to San Francisco via San Jose, and also making the old triangle run via San Leandro and Hayward. J. R. Sampson was also a bike rider.

A few years ago more than a hundred attended the third reunion. Sixty-two were present last Sunday.