OAKLANDS VS. GARDEN CITYS IN RELAY RACE ON SUNDAY 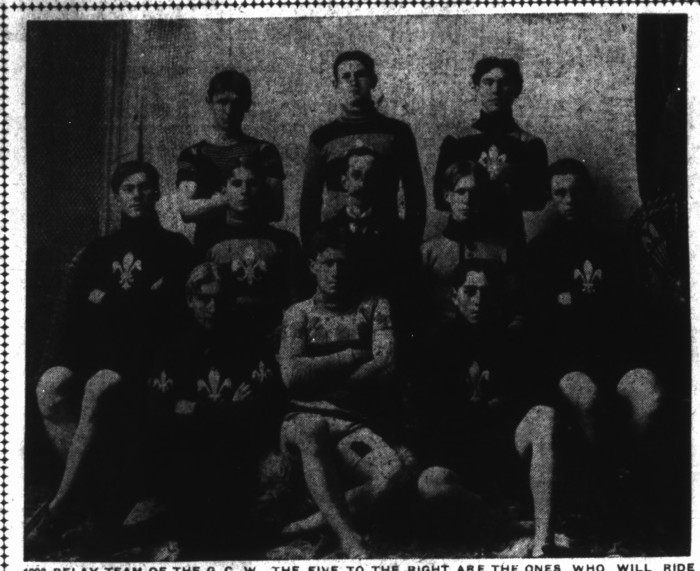 A JOINT club run of the Garden City wheelmen, Oakland wheelmen and the California Cycling club is to be held this coming Sunday. The itinerary will consist of the eighteen-mile run to Centerville and return.

The members of the combined clubs will leave San Jose at 9:30 o'clock Sunday morning and will start back in bunches at about 4:30.

A letter has just been received by Jack Dermody from Mel Moffitt, captain of the Oakland wheelmen, in which he says that the refusal of the Garden City boys to race their team on Labor day came as a great disappointment. The letter also contains a request that a twenty-five-mile relay race be held at Centerville to pass away the time. The Oakland wheelmen have set up the trophy.

The regular semi-annual meeting of the Garden City wheelmen will be held Tuesday, September 6. Besides other important business be taken up, the election of officers will be held. The present officers are: President, E. J. Belloli; vice president, W. A. Hope; recording secretary, W. H. Sontheimer; financial secretary, C. D. Cavallaro. The board of directors consist of the following: J. C. Trevis, E. C. Coyle, L. Normandin, H. L. Garnot and W. R. Lipsett. The board meets this evening to complete arrangements for the local end of the big meet which is to be held at San Francisco on the 9th, 10th and 11th of September.

The old members of the Garden City Wheelmen Mandolin club and all others who wish to join the same will meet this evening in the G. C. W. hall to reorganize and arrange for future programs.