Three-lap track at the Midwinter Fair

A Bicycle Track has been provided in the Recreation Grounds of the Fair for the use of visiting bicyclists. All wheelmen must enter the Fair Grounds at the south gate. They can gain admission at no other gate. Immediately to the left of and inside the entrance is Bicycle Hall where those not desiring to visit other parts of the Fair Grounds may store their wheels and are charged a small fee for the accommodation.

Those desiring to use the Bicycle Track can ride their wheels from Bicycle Hall along the road specially constructed for their use. Bicycle Hall is filled up with every accommodation for the convenience and comfort of wheelmen and wheelwomen. The Hall conducted is under the superintendence of George D. Mackay.

All about the Midwinter Fair, San Francisco And Interesting Facts Concerning California, By Taliesin Evans · 1894 - page 153 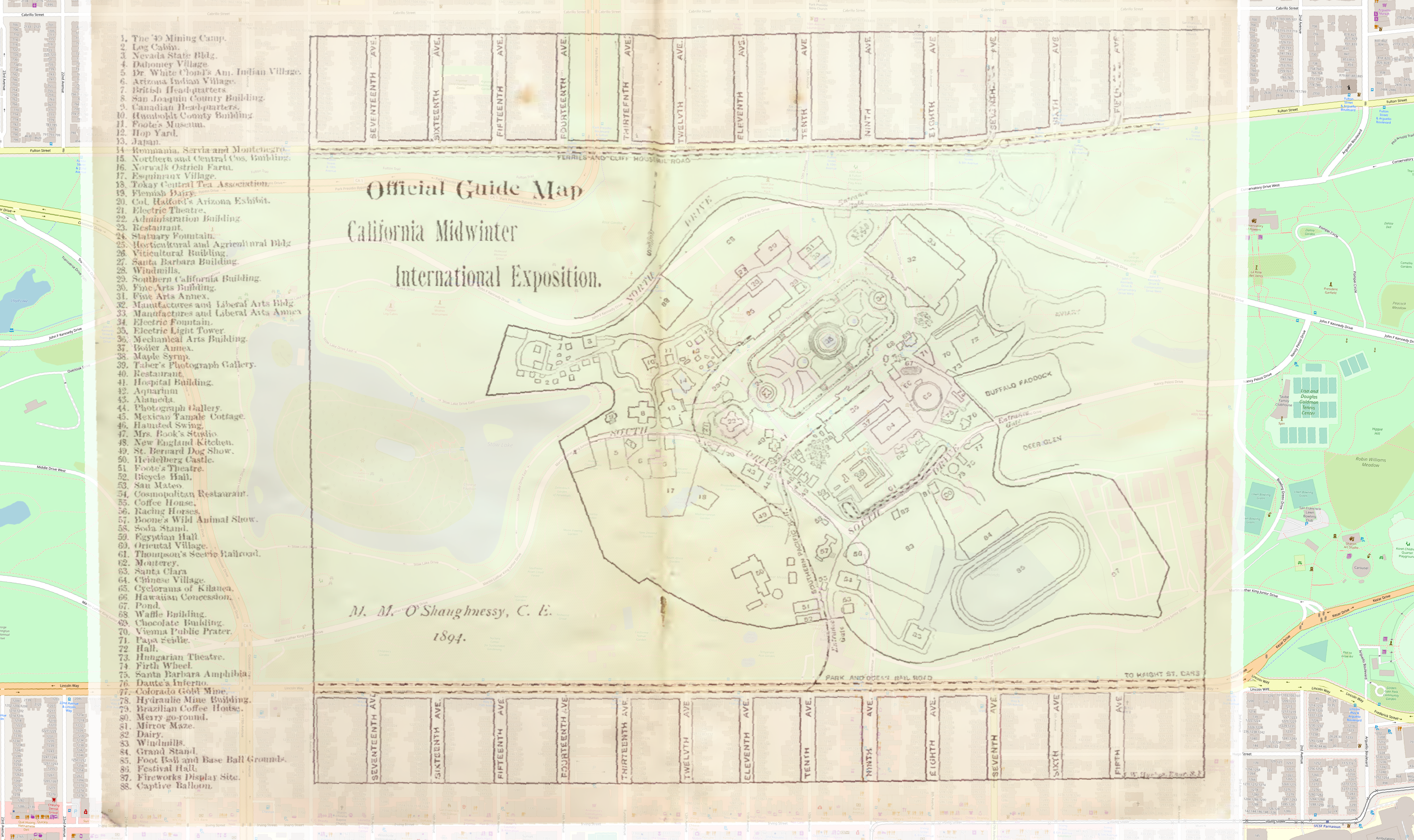 The executive committee of the fair have given to the athletic auxiliary funds sufficient to build splendid athletic grounds just south of the south drive in the park - the grounds at the present time used for recreation purposes. It is the intention to put in a three-lap running track and a two or two and a half-lap bicycle track. The grounds will be used during the existence of the fair by the fair promoters, and to them will accrue the revenue which may be derived therefrom. After the fair is over the grounds will be thrown open to the public as a general recreation grounds for the city, and will undoubtedly be of lasting benefit to the community.

Elwell & Rice, the engineers employed by the Bay City Wheelmen in the construction of the track in Central Park, have been instructed to prepare preliminary drawings for the bicycle track. It is the intention to build it with a banking of about six feet on the two ends, with stretches of about thirty-five feet in width. This will give to San Francisco a track that will be equaled by very few, if any, tracks in the world. It is the intention to offer such prizes as will induce the attendance during the months of April, May and June, 1894, of the very cream of the racing talent of the United States, and, in fact, of the world.

THE CYCLING MEN. - A SUPERB TRACK IS TO BE CONSTRUCTED. - San Francisco Chronicle, 25 Nov 1893 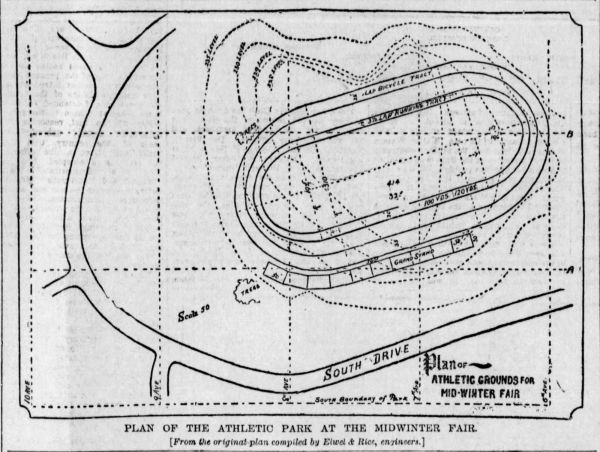 PLAN OF THE ATHLETIC PARK AT THE MIDWINTER FAIR. 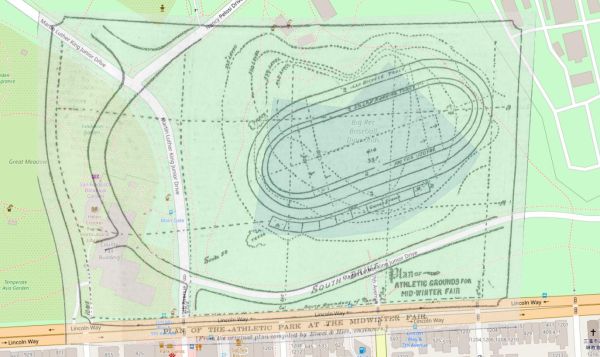 PLAN OF THE ATHLETIC PARK AT THE MIDWINTER FAIR.
Georeferenced with OpenStreetMap and Golden Gate Park, 1903, Britton & Rey

The accompanying plan of the new athletic grounds was made from the original plan in the possession of Messrs. Elwell & Rice, the engineers. The track for pedestrians will be three and a half laps to the mile. It will have a cinder surface and the three-lap bicycle track will have a surface of concrete. The bicycle track will be banked both at the curves and in the straight.

The running track will be fifteen feet wide on the backstretch and twenty feet six inches in the homestretch. This latter will include a 120-yard straightaway.

The athletic park will contain a grand stand capable of holding 5,000 persons. It will be possible, however, for Fair visitors to watch the progress of the games from outside the Park, as the whole will be inclosed by a breast-high picket fence.

In the matter of competitors from a distance it is already an understood thing that the premier bicyclists of the East are going to attend. Among these will be Zimmerman and Sanger, the men who have done so much in the record-breaking line lately.

As the 28th of April approaches the interest in the opening of the Midwinter Exposition bicycle track grows stronger, and the outlook for a most brilliant series of tournaments is all that could be desired. The track is improving every day.

That San Francisco should be the fortunate possessor of a three-lap bicycle track, scientifically constructed on the most modern ideas, is something which would appear to the old-timers as almost too good to be true, yet it is a fact that the track in the Midwinter Fair grounds is, without question, the fastest and best track in California. Situated as it is in a small valley, and protected by the immense grand stands and the Festival Hall, so that the wind during the daytime is very slight, it has every advantage to induce record breaking. That the meets in April and May will witness the shattering of the coast records is a foregone conclusion.

Fairly good dressing rooms have been fitted up for the wheelmen in the bottom of the grand stand out at the Fair track, and Peter McIntyre, an old athlete, who has charge of the track, looks after them.

A number of local flyers are doing some training on the Midwinter Fair track, but find the rough surface a great drawback. A coating of clay or a little dirt and cement would put a good surface on the track.

Otto Ziegler is in town to-day trying the new track. He will go to Stockton to train after Saturday with the Rambler team.

The opening of the Midwinter Fair bicycle track at the Recreation Grounds yesterday afternoon was an event that will long be remembered as one of the most successful and interesting bicycle race meetings ever held on the Pacific Coast. The track is one of the best ever built, and the racers declared themselves delighted with it. They say that many a record will be broken before the series of races inaugurated yesterday is over. The slopes on the turns were built on strictly scientific principles, so that when rounding them at a high speed the rider is balanced practically the same as he would be on a straight-away course, and in consequence he does not have to slow up a particle, nor does he have occasion to fear a fall.

The track at the fair is in excellent condition. It will, however, require a few finishing touches to put it in perfect shape. The first time a meet is held there and the wind does not blow some coast records will be shattered. 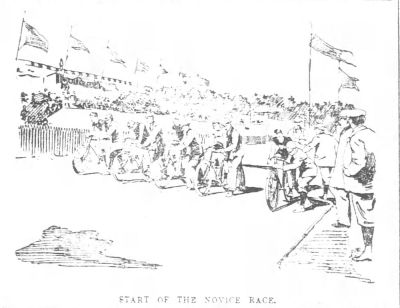 START OF THE NOVICE RACE.

THE WHEEL. - Enthusiasts Who Are Keeping in Trim for Near Future Events. - The San Francisco Call, 06 May 1894