ECHOES OF THE RELAY RACE.

The Victorious Garden Citys and Their Speedy Men.

It Is In Poor shape and Thoroughly Unfit for Racing Purposes - Something About E. C. Bald, the Wheelman Who Has Broken Several World's Records - May Attend the Fair Competitions.

The Garden City Cyclers have been fortunate for years in having several speedy members. Wilber J. Edwards and Clarence Davis cannot be beaten except by less than a half-dozen men, and with this number they compose the champions of the Coast at all distances. The winning team was made up of men who proved to be equally as fast riders - in fact, some of them made much faster time than Edwards, but he had a head-wind to ride against. Yet it was not supposed that the Garden City team was so strong. I said in a former article that they would be surely one of the first three teams, but might not win on account of having some men that would lose the ground that Edwards, Davis and Alexander would gain. This was proven in the case of Desimone, as I stated, but Joe Desimone was not in good health and suffered some loss in strength on that account.

The riding of H. C. Smith in the first relay was a great surprise to many, as he held Terrill all the way and was only beaten thirty seconds, and that right at the finish.

The time made on that first relay was wonderful, considering the conditions of the road and the disadvantages to be encountered. An average gait of three minutes was kept up throughout it. Mr. Smith has had considerable experience in road racing, otherwise the Garden City Cyclers might not have won.

Delmas did not do as well as was expected, but his best effort has been track work, and on his relay endurance and strength were more needed than speed. Needham also rode slower on his relay than either the Bay City man or the Acme contestant.

Hubbard was riding strong, and made up the two minutes that George Osen lost in the relay before him. Al Jarman showed up splendid and made very fast time for the fifth relay, which helped the team considerably.

The Garden City's racing committee is made up of Captain R. J. Butler, President Lamkin, H. A. Alexander and G. W. Pollard, and to these gentlemen belongs much of the glory for the victory, Captain Butler said a fortnight before the race that he had a winning team, and that he was confident of it, for though some of the men were weak in comparison to the club's strongest rivals, the arrangement was such that the flyers would cover any losses that might occur. 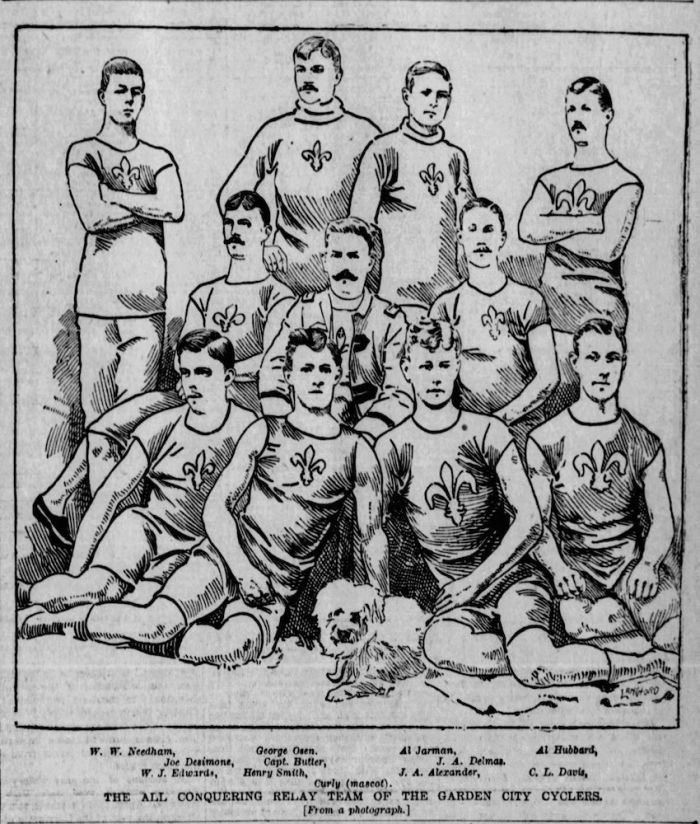