SAN FRANCISCO, Sept. 12. - An immense crowd attended the state bicycle meet of the Y. M. C. A. at Alameda today. Riders from all parts of the state participated. The bicycle races resulted as follows:

The Olympics made a game race throughout, and would have been a prominent factor had not their team been crippled before the race was run by the injury of three of their best riders, necessitating two withdrawing and the substitution of untrained men. One of these latter, however, proved a wonder, J. E. Edwards, who won his relay in handsome style after taking a severe header near the start. Foster rode a great finish, as he always does, and was behind only because the men before him kept him back.

To-day the San Francisco Young Men's Christian Association Cycling Club will hold its initial road race over the five-mile course from San Mateo to San Carlos, starting about 2:30 P. M. The complete entry list with the riders' handicaps was exclusively published in the CALL last Wednesday. To witness the race spectators should take the train which leaves Third and Townsend streets at 11:45 A. M. There are nineteen entrants, the scratch man being J. E. Edwards, who rode the first relay for the Olympic Club last Sunday, covering the ten miles in 29 min. 35 3-5 sec., faster time than was made by any other rider over this relay before. 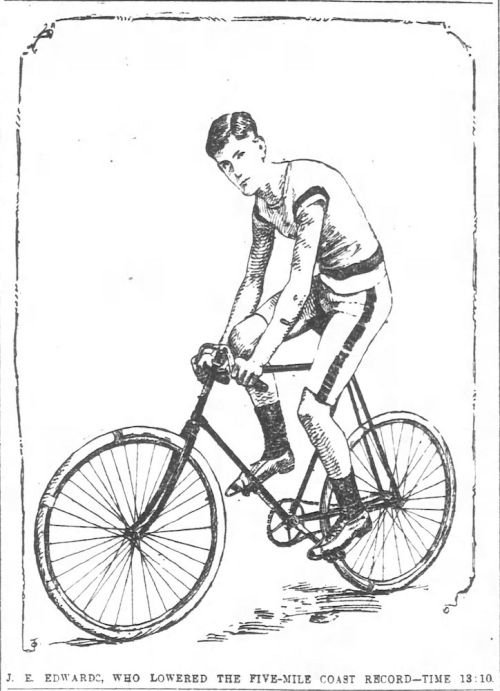 J. E. Edwards, the present holder of the five-mile Coast road record, is a pleasing young lad 19 years of age, standing about 5 feet 9 inches, and weighing 148 pounds in riding costume. He began riding a wheel several years ago, but made his initial bow to the public in the Santa Monica road race held July 4th last, at which time ninety-six riders competed. Edwards received a handicap of 19 minutes and finished in tenth place, passing seventy-six riders to do so. Upon the day of his arrival in this city the Y. M. C. A. Cycling Club held a race meet in Oakland in September, and he entered those races without a day's training, winning his maiden track race and a gold medal as a prize.

His next feat was riding the first ten-mile relay in the Associated Clubs' annual relay race on April 7th last. In this he beat all his competitors in the exceptionally fast time of 29:35 1/2. This performance in itself stamped the lad as a record-breaker, and when he signified his intention of riding in the road race of the Young Men's Christian Association Cycling Club of San Francisco, of which he is also a member, his many admirers loudly proclaimed his ability to lower the Coast record. The sequel showed conclusively that his riding abilities are not overrated. He not only lowered the record for five miles to 13:10, being thirteen seconds better than any previous time, but did so without any perceptible evidence of distress. The Young Men's Christian Association intends to hold another race very soon over the same course, taking the precaution to put in a tanden as pacemaker in the belief that young Edwards can lower the world's record for this distance.

He is a prominent member of the Olympic Club Wheelmen, and that club will be well represented both upon the track and road during the coming season by Edwards.

While training for the Santa Monica road race Edwards rode an unpaced mile in 2:16, and was caught by several watches, but never claimed it, as no sanction had been requested before the performance. He is a class A rider, and will, perhaps, give Jones of the Cyclers a hard rub.

The Olympic Club Wheelmen have a run to San Mateo to-morrow to witness the attempt of J. E. Edwards of their club to break the world's record for five miles, paced by tandems, on the road. On June 2d the club will conduct another of its training spins, which have been found a success in developing racing men.

To-morrow afternoon, at 2 o'clock, J. E. Edwards of the Olympic Club Wheelmen, the Imperial Cycling Club, the San Francisco Y. M. C. A. Cycling Club, and member of several other wheeling organizations, will make an effort to lower the world's five-mile road record, on the straightaway stretch from San Mateo to San Carlos. He was to have made this endeavor last Sunday, but rain prevented. He will be paced by tandems. He has ridden the distance over this course in 12:13 1-5. The record he wants to beat is 11:19. A minute under such conditions is a whole lot of time. Can he do it?

Chief interest centered in the attempt of J. E. Edwards, of the Olympic Club wheelmen, to lower the existing record for five miles on the road. He was successful by the small margin of one-fifth of one second, riding the distance in 12:13, as against F. M. Byrne's coast record of 12:13 1-5.

J. E. Edwards, the fast racer of the Olympic Club, will try for the world's five-mile record tomorrow over the course from San Mateo to San Carlos. Everything will be done to help him secure the coveted record. Manager Jack McGlynn has arranged for tandem and single pacemakers to help Edwards. The present American record is 11:19, made by A. C. Van Nest at Chicago on October 9th, Edwards has ridden the five miles in a competition race in 12 minutes 13 2-5 seconds.

Charles S. Wells, the crack class B racer of the Bay City Wheelmen, made a successful attempt at lowering the coast five-mile road record yesterday, and had the conditions been more favorable would doubtless have come well within the world's record for the distance, of 11:19. As it was, however, he brought the time down to 12 min. 5 1-5 sec., beating by 8 seconds J. E. Edwards' record of last Sunday.

The racing at San Jose on July 4 attracted the greatest attention the past week. J. E. Edwards of the Olympic Club Wheelmen surprised his most ardent admirers by his wonderful bursts of speed.

The road riders of the Association Cyclers are in active training for their five-mile race on September 21. The Y. M. C. A. will send a team of three men to Los Angeles to compete at the State field day in October. J. E. Edwards will go and possibly J. A. Keller, W. Ede or Percy Burr.

J. E. Edwards, the erstwhile racing man, left suddenly for Alaska yesterday, having less than a day's previous notice of the trip. He struck it rich trom the very start, being presented with a complete outfit and passage.

TO OLYMPUS ON WHEELS. - Annual Feast and Games of the O. C. Cyclers at Escalles. - San Francisco Chronicle, 14 May 1898

John E. Edwards, the well-known cycle racing man, will leave for Alaska to-day on the Charles Hanson. He had no thought of a trip to the gold fields of the north until 4 o'clock yesterday afternoon. He bought stock in the Kotzebue Commercial and Mining Company owned by a man who grew fainthearted at the last moment. Edwards is of an adventurous disposition and his friends expect to bear of his success in Alaska.