Charles S. Wells, the crack class B racer of the Bay City Wheelmen, made a successful attempt at lowering the coast five-mile road record yesterday, and had the conditions been more favorable would doubtless have come well within the world's record for the distance, of 11:19. As it was, however, he brought the time down to 12 min. 5 1-5 sec., beating by 8 seconds J. E. Edwards' record of last Sunday. 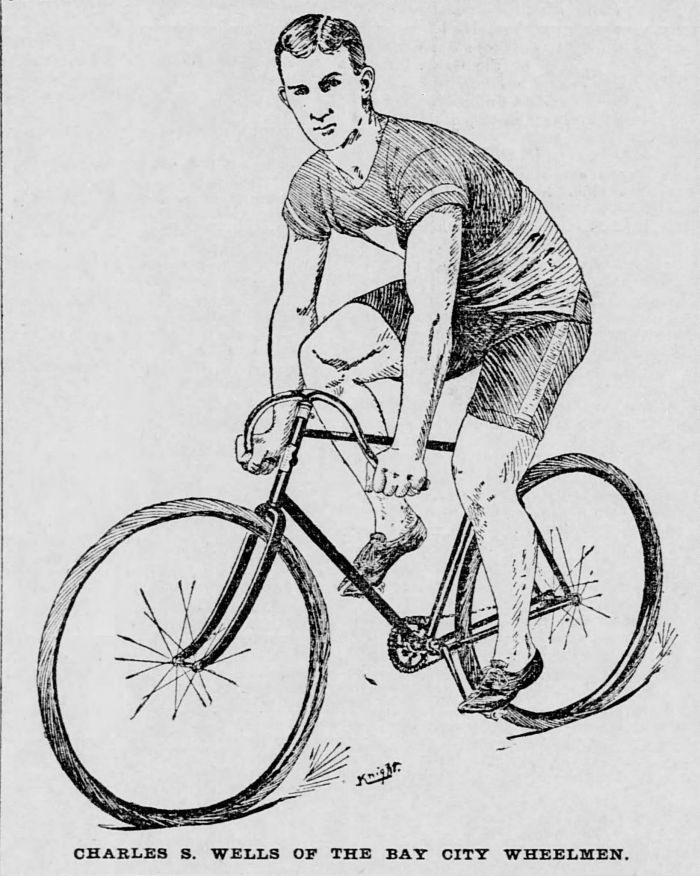 The trial was made over the stretch from San Mateo to San Carlos. This course was in perfect condition a few weeks ago, but has lately become somewhat dusty and rough. Wells was further handicapped by a strong headwind the first three miles of the distance, and under these adverse circumstances the wonder is that he did so well. It was only his grit and remarkable endurance that brought him through,

The start was made promptly at 2:30 P. M. on the county road, just outside San Mateo, where a large crowd had assembled. To assist and encourage the rider, tandem pacing was introduced, the team that led him from the start being H. F. Terrill and T. A. Griffiths. A terrific pace was set and Wells was soon out of sight of the starting point. Two miles down the road another tandem team was put in, ridden by S. B. Vincent and E. Languetin. Being fresh they made the gait equally as fast as the other team, which, by the way, contrary to all precedent, kept right up and continued to assist in leading Wells along to glory.

A mile and a half from the finish the third team, Archie Reid and Sanford Plimmer, [Plummer] swung in front of the fast moving bunch, and led them a merry chase toward the end of the ride. It was a very pretty sight as the three flying tandem teams hove in sight, with Wells tacked on so close behind the last one that it appeared like a triplet. They came on without a swerve and dashed across the line, where a throng of wheelmen and spectators had congregated. The timers clicked their watches and it was over. On comparison it was found Wells had made the ride in the time stated, 12:05 1-5. The riders were going so fast they went a quarter mile down the road before they could come to a stop.

After the ride all returned to San Mateo, where the watches held at the start and finish were compared, and the following certificate was handed to Wells, that he may make claim to the coast record:

Watches were all compared and found to agree exactly, both before start and after finish.

Terrill and Griffiths, the tandem team who rode the entire distance with Wells, claim the tandem road record for the coast for five miles. Starting three seconds behind him they finished two seconds ahead, and were timed at 12 minutes flat.

The California Cycling Club held the final of the one mile handicap club races yesterday at the Central Park track at 9:30 A. M. The starters were: Harvey, scratch; Struven, 60 yards; Thiesen, 80; Sternberg, 130; Birdsall, 140. The race was won by Birdsall in 2 min. 17 secs., Sternberg second, Struven third. Harvey could not overtake any of the limit men,

After the race about forty of the club members took a ride down to the Crystal Springs lakes under Captain Burke.

The San Francisco Road Club had a run to San Jose Saturday night by moonlight, returning yesterday. The club has just moved into new quarters at 722 Golden Gate avenue.

Edwin Mohrig and his two little sons, George Morrill, Mrs. Mohrig and two other ladies started yesterday awheel for San Luis Obispo. They stopped at San Carlos to witness Wells' speed trial and then continued on to San Jose. They will be gone several weeks.

W. H. Stinson and James Coffroth started on a wheeling trip to Los Angeles Saturday. They rode to Gilroy that day, and yesterday wired they had arrived at Salinas, to which point they were accompanied by Thomas Mulvey. At this rate they will soon be in Southern California.