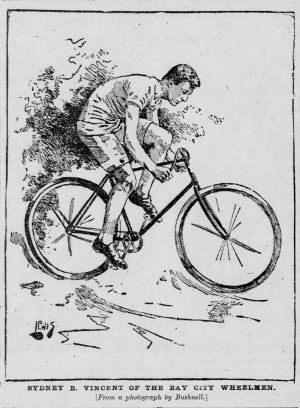 SYDNEY B. VINCENT OF THE BAY CITY WHEELMEN.
[From a photograph by Bushnell.]

Sydney B. Vincent of the Bay City Wheelmen, whose picture is presented this week, is built like a racer and rides as one. He has long been known as a particularly fast man on the track and road, and it was not a great surprise when he won the Bay City Wheelmen's five-mile road race last Sunday, though he had to put forth his best efforts to do it. Last May and June he was riding second to Harry F. Terrill in class A, which of itself is a reputation for any man. He has not given much attention to racing of late, except on the cable slot going home every morning at 3 A. M., for he works nights for the Associated Press. He's been doing this so regularly and often that all the people along his route home know him, and when a dark streak crosses their vision for a second and soon is lost to sight in the distance, they think: "Syd must be late to-night, or else he's training again."