ABOUT THE CYCLE. - Allen and Sachtleben on the Homestretch. - The San Francisco Call, 16 Jan 1893

Allen and Sachtleben on the Homestretch.

A Heartfelt Tribute to Thomas S. Cobden - Outlook for the Coming Season.

T was with regret that the cyclists of San Francisco said good-by to Allen and Sachtleben on Wednesday. During their brief stay in this city they made many friends who will watch their future careers with the interest born of honest admiration. They have already achieved a world-wide reputation as intrepid travelers, yet more modest gentlemen were never met. Nearly all of the great papers of the East and England have told the story of their wonderful journey, and the New York Sun's able foreign editor honored them with a column leader on titled “The Greatest of Bicycle Rides." All of this adulation has not turned their heads nor is it likely to make them nomads or interfere with their success in the practical affairs of life. They should be welcomed by wheelmen everywhere, for their personalities prove that the true cyclist is not a "sport" and that "pushing a safety" is not incompatible with education and refinement.

Last Monday the young tourists, after a run to the park, were entertained by the California Cycling Club at its rooms in the Mission, where, according to the loyal members, fogs are unknown and incipient frosts are thawed by the warmth of falling rose leaves. Incidental to the day was a splendid lunch at the home of Henry F. Wynne, secretary of the California Association of Cycling Clubs. The old Mission Dolores was visited, the Fathers kindly granting permission to stack half a score of pneumatics inside the churchyard against the adobe walls on which hung ancient tapestry - a rare conjunction of diverse civilizations.

On Tuesday the Mission was revisited and a number of good photographs obtained, though the Western Addition was not neglected. If the boys along the road can only induce the [[The Wanderers|Wanderers] to remove their gloves and will inclose a Columbian stamp for a reply the mystery of those forget-me-not rings will be explained.

At the Stanford University, which they visited on Wednesday, they were met by Captain W. R. Lipsett of the Garden City Cyclers, accompanied by Second Lieutenant Ed Williston and I. W. Needham of the same club, who acted as an escort to San Jose. That night they were the guests of the Garden City cyclers and next morning were accompanied to Gilroy by a delegation of wheelmen. At this rate of progress they will reach New York about the Fourth of July. But, then, time's no object! 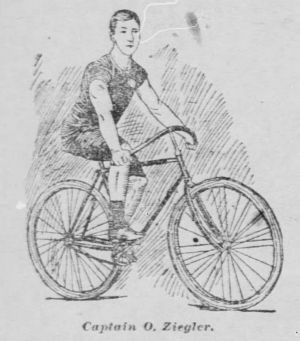 The five-mile handicap road race of the San Jose Road Club resulted as follows. The handicaps were: O. Ziegler and O. Osen, scratch; C. Belloli and W. Jamison, 15 sec, J. Bailey and W. Suttich, 30 sec.; R. Nash, C. Heppe and A. Berryessa, 45 sec. Ziegler came in first, winning the gold medal for the best time, 16:41, and bicycle shoes for first in. O. Osen won the silver medal for the second-best time, 16:47 2-5, coming in third, close to Belloli, who came in second in 17 minutes. C. J. Belloli has been elected secretary-treasurer of the club. Captain Ziegler is 18 years of age. about 5 1/2 feet tall and of handsome stature, weighing about 150 pounds. In 1890 he first appeared on the track in San Jose, and again in 1892, on September 5, at Alameda. September 9 at San Jose and November 24 at San Jose. At each event he developed considerable speed, but lost each time by some accident or misunderstanding. Profiting by his former experience, he will be a dangerous competitor during the coming season.

The well-known Pathfinder Club of this city had its first run since the late stormy weather on Thursday last to the Six-mile House, under the leadership of President Flanagan, Captain McCord being unavoidably absent. Fifteen members participated. Good progress was made, considering the roughness of the road. Upon reaching their destination an excellent collation was partaken of, which was thoroughly enjoyed. On the return trip several short spurts were indulged in, in which the genial treasurer, Mr. Levy, acquitted himself with distinction. On Thursday the Pathfinders will have a run to Haywards, weather permitting.

The Merced Bicycle Club gave a grand entertainment at the opera-house, Merced, last Monday evening consisting of vocal and instrumental music, recitations, choruses, songs and readings, concluding with the laughable farce of "Lend Me Five Shillings.” A profusion of cut flowers decorated the tables and piano, and in every nook and corner of the stage would be seen pot-flowers and tropical plants. A fashionable audience filled the house to overflowing, every chair having been secured several days previously. The members of the Merced Bicycle Club have reason to be proud of the results of their first entertainment. This club is made up of the best young men in the town and its refining influence is felt and much appreciated in society circles. A flash-light photograph was taken of the performers.

The cyclists of this city have sustained a real loss by the departure by Thomas S. Cobden, ex-secretary of the San Francisco Bicycle Club, and one of the best-liked men who ever rode a wheel, He has been compelled by ill health to remove to seek a change of climate, and will seek the more rarified air of Denver. The following resolution, unanimously adopted by the governing body of the San Francisco Bicycle Club on Thursday night, shows the esteem in which Mr. Cobden is held by those who know him best:

Resolved, By the board of directors in regular session that in the several years of his connection with the San Francisco Bicycle Club, no member has done more for its advancement and success than Mr. Cobden, and that in his resignation and necessary departure from our midst this club has lost a most efficient officer and a most active and energetic member, and this division of the League of American Wheelmen and the cause of wheeling generally on this coast a most ardent and enthusiastic worker; that in leaving us to take up his residence in a distant city he carries with him the regrets and well wishes of every member of this club, the earnest hope that he may be speedily restored to health and be successful in all his undertakings.

The new administration of the Alameda Bicycle and Athletic Club is determined that the name of this popular organization shall be kept to the fore during the coming season. Already arrangements are being made for the great race meet in May and all of the best men in the State will doubtless be included in the list of entries. There will be a regular meeting of the club at Cycle Park to-morrow evening and a full attendance is desired.

The movement in favor of a separate division of the L. A. W. for Southern California is likely to prove successful and should not be opposed in any section, for it is undoubtedly a move in the right direction. Chief Consul Strong has issued a circular to all league clubs, the substance of which is as follows:

At the approaching constitutional convention of the League of American Wheelmen on February 20 next California will offer an amendment to the national constitution, the effect of which will be to permit the formation of a separate division in Southern California.

It has been suggested to us by Secretary Bassett that each league club in California elect as a member of the club some person who will be present at the convention, and issue to such person a certificate in form as inclosed.

J. S. Thayer of Los Angeles, the vice-consul of the division, will attend the constitutional convention in behalf of Southern California, and he is the person you are requested to elect a member of your club. So soon as the purpose for which he is elected is served, he will, of course, place his resignation in your hands.

League clubs are asked to act on this proposition as soon as possible, as Mr. Thayer leaves for the East on February 1.

It seems proper to remind some esteemed contemporaries that Frank Lenz and not Mr. Planz, is making a bicycle tour of the world. This is not a case where ignorance is bliss.

Willie Windle is doing a great deal of road-riding. He will be fit for racing very early in the spring.

The only cement track in America is in Savannah, Ga. It is a quarter lap, thirty feet wide.

The pneumatic tire problem has rot been solved and never will be until the bicycle riders thoroughly understand the use for which such tires were designed and learn to put a just limit upon the capability and durability of a sensitive air cushion, which is subject to severe and constant pounding over uneven roads, and smooth surfaces, too, as a matter of fact.