Gives Chase to Handicapped Riders and They Beat the Scratch Men Out.

A COW who evidently thought Livio Maggini's gally colored racing suit had designs on the life of her newly born calf aided him in getting across the tape first in the handicap bicycle race held yesterday by the Garden City Wheelmen over the East San Jose 5-mile course.

Maggini and "Fat" Bryant started in the contest with a handicap of 1 minute and 15 seconds over Willie Chaboya and Charlie Chaboya, the "Evergreen Human Motors," who were in excellent shape for the contest, while the handicapped men were badly off color.

The Chaboya brothers rode themselves "all in" and half way around the course had almost overtaken the leaders. Then coming up King road a cow grazing by the roadside with a calf spied Maggini's and Bryant's pink and red racing suits. She put down her horns, stuck her tail straight up in the air and gave chase. Hearing the thudding of hoofs and an angry bellow behind them, Maggini and Bryant looked around - then they forgot that they were tired.

They also put down their heads and scorched. For a time it was nip and tuck, but after awhile when they dared to look around again the cow was nowhere to be seen - neither were the Chaboya brothers.

Nearing the tape Maggini unwound a long sprint and beat Bryant to the tape by half a length.

Thirty-five seconds later the Chaboyas flashed across the finish line one second apart, Charlie Chaboya, the younger, leading. Charlie's time for the five miles was 13:30 - very fast considering the very poor condition of the roads.

Ten minutes after the race had started a dozen sleepy bike riders appeared in East San Jose too late to start, for Captain Dermody was as good as his word and started the event promptly at 10 o'clock.

Charlie now leads in the club series of road races to determine the local "King of the Road." He had captured two of the gold bars offered for best time giving him a total of 10 points. Maggini and Inman each have 3 points to their credit.

A few entries for the big 25-mile handicap to be held a week from next Sunday are now coming in. They are from Nevada and San Francisco. 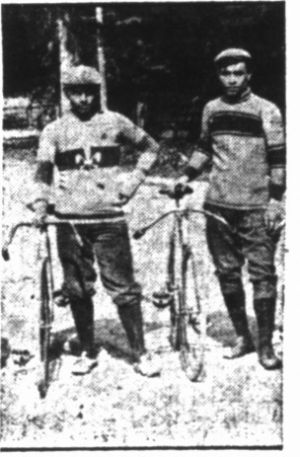