They Win the Annual One Hundred Mile Relay Race in Record Breaking Time.

Another annual hundred-mile relay race has come and gone and again the Garden City wheelmen have demonstrated that they are the undisputed champions of the Pacific coast. Their victory yesterday over the four opposing clubs entered in the great contest was so decisive that no question is left in the minds of the enthusiasts of the sport that the Garden City wheelmen stand in a class by themselves when it comes to road racing. 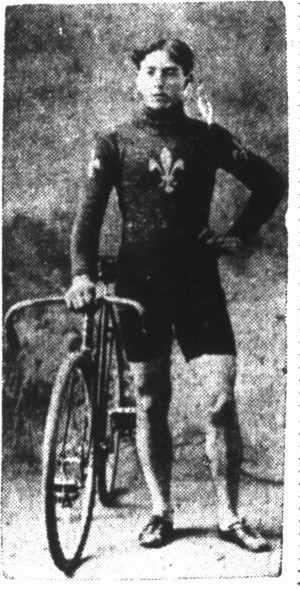 J. BERRYESSA
Who took the first lead of the race.

Starting from 303 Larkin street, San Francisco at 9:07 o'clock in the morning the Garden City wheelmen circled the beautiful San Francisco bay at breakneck speed, gaining steadily and surely and widening the distance between themselves and their pursuers mile by mile, until the final yard of the race was ridden. Then came the surprise. The watches caught the finish at 1 o'clock, 47 minutes and 43 seconds, just 4 hours, 40 minutes and 43 seconds from the time the start was made in San Francisco. This is the fastest one hundred-mile relay race ever ridden by a team of ten men on the coast, and those who are conversant regarding such matters say that it is the fastest one hundred-mile relay bicycle race ever ridden on any track. It lowers the former record of 4 hours, 42 minutes and 30 seconds made by the Garden City wheelmen in 1901 by 1 minute and 57 seconds. This feat seems all the more remarkable when the fact is considered that the team is composed partly of green men, who have never before ridden in any similar event.

Garden Citys All the Way.

It was all Garden City wheelmen from first to last. Not one of the other clubs were in the running, and after the second relay they never so much as caught sight of one of the riders wearing the "fleur de lis." The New Century wheelmen and the Oakland wheelmen fought it out for second place, while the Bay City wheelmen and the California Cycling club were so far in the rear that they never finished. They were at least 8 minutes behind Waibel when he carried the packet across the tape at Central avenue, Oakland.

The contest was one of the cleanest ever ridden, only one feature marring the sportsmanship of the event. The guilty party was Hables of the California cyclers, who rode the sixth relay, leading through this city. He was 11 seconds behind P. Maggini at the start of the relay and nearly 6 minutes in the rear of the Oakland and New Century wheelmen. Before the relay was finished Hables had caught the New Centuries and the Oakland and Bay City wheelmen. Instead of following the course he cut off about three miles on McLaughlin avenue in East San Jose.

There were very few accidents during the day, none of them of a serious nature. The worst accident to befall a local rider happened to Dieffenbacher on the ninth relay. In crossing the bridges which lay on his course he punctured his tires in ten places with the slivers. He had to cast his wheel aside and mounted upon the bicycle of Harden, his trailer, and finished his relay.

He was the only rider of the local wheelmen who had to change wheels, and still he covered his ten miles in 18:25, losing but a little time.

Berryessa Gets a Lead.

L. Maggini made the record ride of the day. He covered his ten miles in 26 minutes, gaining two minutes and 45 seconds on his pursuers. He put the packet in Burnett's hands. The latter rode his first relay yesterday and made a great showing. He widened the distance between himself and his pursuers and when he finished in front of the rose carnival pavilion on the Alameda he was five minutes and 30 seconds in the lead. The New Centuries were second and the Bay City and Oakland Wheelmen were fourth. The California Cyclers were 11 minutes in the rear. 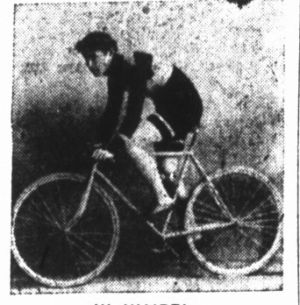 W. WAIBEL
Who rode the last relay for the Garden City Wheelmen.
At the Finish.

At the finish there was a great crowd, fully 2000 crowding Central avenue. There was great excitement when the Garden Citys finished in the lead. It increased as minutes passed and no other riders falled to appear, but finally Trout of the New Centuries and A. T. Smith of the Oaklands sprinted down the course almost neck and neck, the New Century man finishing slightly in the lead. The Bay Citys and the California Cyclers failed to finish.

Nearly every man on the relay team yesterday learned to ride their bicycles by carrying paper routes for the Mercury and the Herald. Their hard grind on their routes every day has developed them so that they are great riders. McFarland followed the same line of business while he was a boy and it is the pride of every paper carrier to pattern after the lanky cyclist.