There were two tracks built in Sacramento, in the same one year period, one indoor at the New Pavilion at Fifteenth and N streets, and one outdoor at Oak Park. Frank D. Elwell's name comes up in mentions of the design and construction of both. Perhaps he did contribute to both. The Capital City Wheelmen created the outdoor track, and apparently a Mr. Winans built the indoor track.

This 1938 street map shows a race track in a State Fair Grounds in the Oak Park neighborhood of Sacramento. It's not clear that it's the same track. No period map is available for the location. 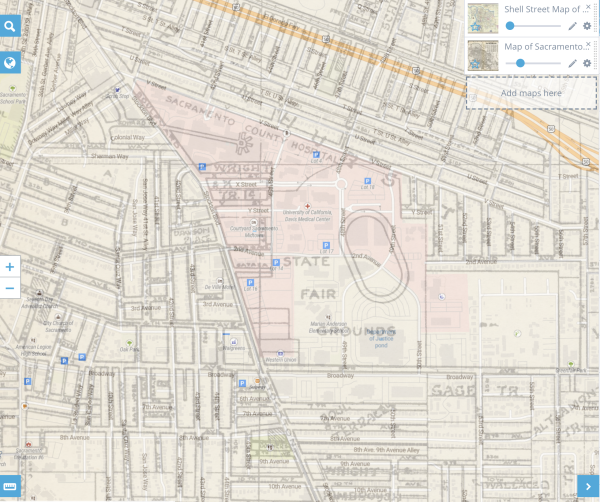 At the annual meeting of the Capital City Wheelmen last night the committee appointed on a speed track made its report and submitted a plan of a racing track the estimated cost of which would be $8000. The intention is to form a joint stock company for the purpose of building the track.

Mr. Upson, from the Committee on Speed Track, made a lengthy report and submitted a plan and estimates made by Draughtsman Watkins of the Bureau of Highways. The cost of the track is estimated at $8,000. It will probably be built by a joint stock company. The matter was continued with orders to the committee to pursue its course.

Mr. Upson, from the Committee on Speed Track made a report 07 Jan 1896, Tue The Record-Union (Sacramento, California) Newspapers.com

The Committee on Speed Track was given further time.

An excellent three-lap wood track was commenced this week at Oak Park, Sacramento. The construction is under the personal supervision of Frank D. Elwell, and when completed will be used largely for the purpose of holding inter-club races between the local clubs of Sacramento and some of the San Francisco organizations which have already expressed themselves as greatly pleased with the idea.

The track is 200 feet over three-fourths of a mile - a flat roadway, quite heavy, crossed by rail tracks, by roads and paths, and with four sharp turns that are not banked up at all. Riders will understand what all that means. Yet on such a track splendid time was made - indeed, under all the circumstances, remarkable time.

Fastest in the World.

The big Sacramento meet takes place on Sunday. June 6th, on which occasion will be opened what promises to be the fastest track that has yet been constructed in the world. It is a one-third mile affair, built of narrow strips of wood set on edge, similar to the construction of the Velodrome, and is under the control of the Capital City Wheelmen."

"What racing that meet will provide! The track is unquestionably the fastest three-lap affair in the world barring none. It has a width of twenty-four feet throughout and is built of narrow strips of Oregon pine laid on edge and running lengthwise of the track. The grand stand has a seating capacity of over 2000 while well arranged bleachers will provide 2000 more seats. The training quarters are well arranged, light, roomy and cleanly."

The appointments of the new track are perfect, and excel those of any track in the State. The stands are new and clean, the track finished off, the inside grounds leveled and hard, and the officials and press representatives, whose comfort was noticeably overlooked at San Jose and Vallejo, were ensconced in a nice shaded stand inside the track.

And in scorching weather, with the mercury close to 100 in the shade!

The Olympic Circuit riders "didn't do a thing" but trample in the dust records that had withstood for months the assaults of the best riders in the land, and the feats were witnessed by close on 3.000 people, fully if not more than half of whom were ladies.

The new track at Oak Park certainly had a most auspicious christening yesterday, and by this morning its fame will be heralded far and wide over the country, and even beyond the seas, through the agencies of the telegraph and the Associated Press.

It is said that the track at Louisville, Ky., and the one at Fall River, Mass., are the only ones on this continent that compare with the Sacramento track in point of speed, and this fact is certainly a big feather in the cap of the Capital City, a credit to Mr. Morton, the enterprising builder and proprietor, and to the Capital City Wheelmen, under whose direction it has been placed.