It Was Organized With a Large Membership at the Park Cyclery.

Harry Spalding, the Captain, Will Direct the Runs Over the Roads.

A large number of the employes of THE CALL, who class themselves among the best bicycle-riders in San Francisco, met yesterday afternoon in Trueworthy's Park Cyclery on Fulton street, opposite Golden Gate Park, for the purpose of organizing THE CALL Bicycle Club. 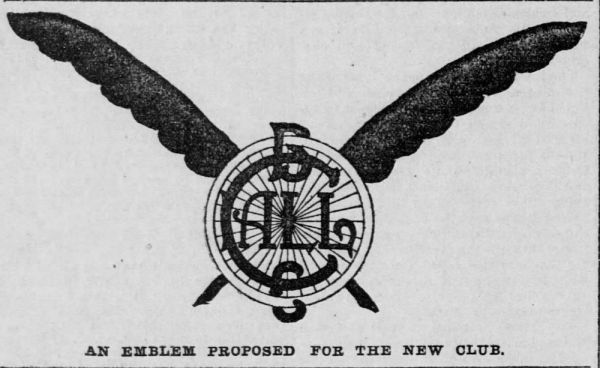 AN EMBLEM PROPOSED FOR THE NEW CLUB.

The meeting was an enthusiastic one, all present entering with a great deal of spirit into the proposition to make this one of the best clubs. A proof of this desire is that every one signed the charter-roll, and as each is a rider of more or less experience it is safe to say that in a short time there will be between fifty and sixty wheels on the road when the captain calls for a run to the Cliff, to Ingleside, across the bay, to San Jose or to other points.

Wells Drury, Emanuel Elzas and others were to have been at the meeting, but they were unavoidably absent. Their names will appear on the list of charter members.

The meeting was called to order by T. F. Boyle, who stated that one of the objects of the club was to bring into closer companionship the men working in the different departments. 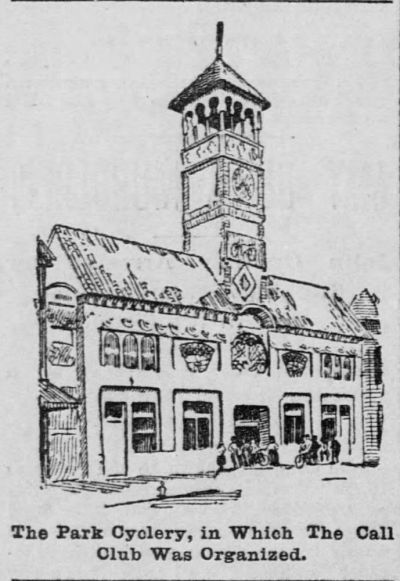 The Park Cyclery, in which The Call Club Was Organized.

Samuel Foltz was elected president and Ernest A. Helmore secretary, after which a constitution and by-laws were adopted. Ernest C. Stock was elected vice-president; Thomas F. Boyle, treasurer, and H. W. Spalding, captain. These officers, together with the president and secretary, will constitute the board of trustees.

The question of emblem, cap and sweater was called up, but it was decided not to take any action until the next meeting, when others who expressed a desire to join the club will have an opportunity to offer suggestions.

One suggestion for an emblem is two quill pens crossed, having resting on these a wheel and the name of the club.

P. P. Grace was chosen sergeant-at-arms. During the afternoon the members of the club were shown over the new cyclery by Mr. Trueworthy, who has built one of the most extensive ones in the City and who is completing arrangements to build San Francisco bicycles.

At the close of the meeting a vote of thanks was tendered Mr. Trueworthy for his courtesy, and then Captain Spalding ordered an informal run to the Cliff. Twenty of those present answered, and forming into line made a splendid run through the Park to the beach and back.

George T. Hill, foreman of the stereotype department, who tips the beam at 260 and is anxious to become a rider, was placed on a wheel, and with the assistance of two men to hold him on either side he succeeded in making the circuit of the cyclery. He says he will have a wheel specially built for him on the lines of the one constructed for Henry Martin of the Native Sons.

"THE CALL" BICYCLE CLUB - It Was Organized With a Large Membership at the Park Cyclery. - The San Francisco Call, 26 Aug 1895

THE CALL Bicycle Club is growing beyond all expectations and now has an active membership of seventy-five men. I had no idea there were half as many actual riders on the paper. The business office, editorial, press and composing rooms have furnished the material for what promises to be one of the largest clubs in the City if it keeps on growing at the present rate. All the members who can get away will ride to San Jose to-morrow, and the balance will ride down Monday morning to witness the races.

THE CALL Bicycle Club will meet tomorrow afternoon at 2 o'clock at Trueworthy's cyclery, on Fulton street, near D. After the meeting, at which uniforms, clubrooms, etc., are to be discussed, the club will have a run through the park, and if only half of the seventy-four members turn out, they will make a big showing.