As is usual about this time every year, cycling is receiving a great impetus on account of the number of race meets and club runs. The Fourth of July and Admission day witness the greatest events or the year on the track, and Monday will be no exception to the rule, as the entry list for the Garden City Cyclers' race meet, published exclusively in THE CALL Thursday, contains the names of all the crack riders of the State and an unusually large number of new men who will try their luck in the class A events, the one-mile handicap alone having seventy-five starters.

All the clubs have called runs to San Jose for to-morrow, and by to-morrow night the Garden City will be full of wheelmen from everywhere within a radius of fifty miles of that point. On Monday morning the California Associated Cycling Clubs will have their annual competitive parade, for which two $75 prizes are offered by the Garden City Cyclers - one for the club having the largest number in line and the other for the club making the best appearance. These two prizes can only be contested for by clubs belonging to the association; but for clubs which do not belong two prizes under similar conditions will be awarded, consisting of one year's dues in the association ($10) to each club. The parade will start at 10 A. M. It is stipulated that it will be necessary that at least three unattached clubs compete for the special $10 prizes, otherwise no awards will be made.

Clubs desiring special baggage accommodations for wheels on trains returning from San Jose Monday night will report the same through their captains to President Wynne of the Associated Clubs, stating number of wheels and division over which they travel. No special excursion train will be run by the C. A. C. C., but a round-trip ticket, good from Saturday morning to Monday night, may be obtained for $2 at the Southern Pacific Railroad offices, which is a reduction of 50 cents from the regular rate.

Mr. Smyth's handicapping is improving with every race meet, and the criticisms of his work when he first undertook the position of official handicapper for the League of American Wheelmen on this coast are no longer heard. He is fair and impartial, and, as he never fails to attend all the races, he is continually in touch with the condition and abilities of the men, and knows exactly how to place them. The league is to be congratulated on having such a good man in this important position, and also in Robert M. Welch, chairman of the racing board, whose conduct of the affairs of that office have made him the friend of all - racers, clubmen and meet-promoters alike.

At a meeting of the Bicycle Protective Association Thursday, a committee was appointed at the suggestion of President S. W. Backus to secure the membership of all cyclery owners and dealers in bicycles, and also to secure the improvement of streets leading to the park, the lighting of the park, the recovery of stolen wheels and punishment of thieves, the publishing of a blacklist by cycleries of the names of those damaging rented wheels and refusing to pay for the same. Some of the largest firms in the City have joined the association. Sacramento dealers are also organizing on similar lines.

The race meet of the Reliance Club Wheelmen this afternoon at Oakland Trotting Park will attract crowds from this City, as the races are well entered and should be hotly contested. The full entry list, with handicaps, was published yesterday in THE CALL, with particulars how to reach the grounds, etc. Sanford Plummer is to be the referee, and some of the circuit riders, who have been doing about as they pleased with the various country referees under whose jurisdiction they have come. had best be very careful, for Mr. Plummer will stand no nonsense, and his decisions once made are always final and correct.

The Crescent Road Club will ride to San Jose to-night, starting about 10 o'clock to take advantage of the late moon. The club has appointed a committee to arrange for a series of road races, the prize to be a trophy which must be won three times.

The members of the Outing Road Club are training assiduously for their five-mile road race next Sunday. The entries close next Wednesday night with Captain Meussdorffer.

Lieutenant Russell will lead the Royal Cycling Club to San Jose to-morrow, returning Monday night by train. The club will hold a smoker Saturday evening next at the Temple, on Turk street, which has been secured for the occasion and a royal time is promised. A. Cooper, Irving Frank, M. Weston, Alfred Woods and M. Meyer have been elected to membership. The club will join the League of American Wheelmen in a body, thereby becoming a league club. A ladies' annex is also proposed.

The Pastime Cycle Club will go to Sacramento for Admission day, and Captain Borman requests all to meet at the corner of Ninth and I streets, Sacramento, tomorrow at 8 A. M. 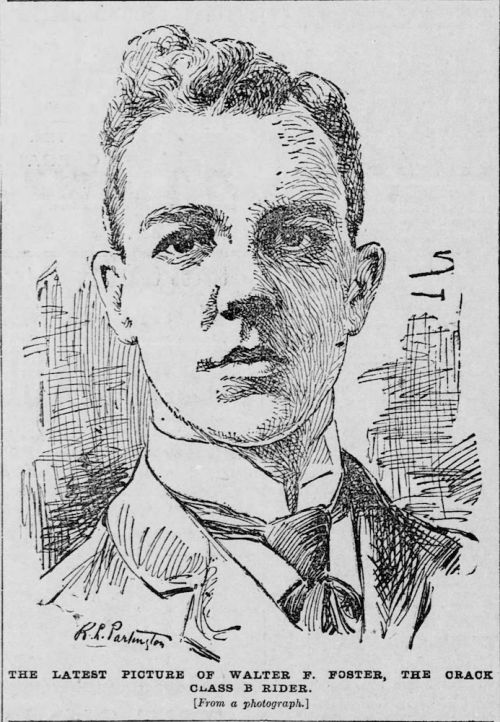 THE LATEST PICTURE OF WALTER F. FOSTER, THE CRACK CLASS B RIDER. [From a Photograph.]

The latest picture of Walter Foster shows him in citizens' attire, and those who have been so accustomed to seeing him in a racing suit may not at first glance recognize the handsome young man whose likeness is presented in this issue. He will race to-day at Oakland and on Monday at San Jose, and can be depended upon to bring the Olympic Club Wheelmen's colors well up to the front in all class B events.

The California Cycling Club will leave their clubrooms at 8 o'clock to-morrow morning for San Jose. Captain Burke expects to have a large crowd in line for the Associated Clubs' parade, and the captains of the Olympics, Acmes and Bay Citys had better drum up their men or the Californias will get away with the prize for the largest number in line.

THE CALL Bicycle Club is growing beyond all expectations and now has an active membership of seventy-five men. I had no idea there were half as many actual riders on the paper. The business office, editorial, press and composing rooms have furnished the material for what promises to be one of the largest clubs in the City if it keeps on growing at the present rate. All the members who can get away will ride to San Jose to-morrow, and the balance will ride down Monday morning to witness the races.

Mrs. John Martin, who attained considerable undesirable notoriety in the Martin will case, is learning to ride a bicycle at a cyclery on Polk street. She has taken several lessons, and may soon be expected to be out on the park roads.

In preparing a puncture in a single tube tire to receive the plug patch, it is not absolutely necessary to burn it out. This process is simply an embellishment, not an essential; it makes a neater job of it, but if the patch plug is of the blunt edge kind with large area of patch surface, the repair will hold just as well if properly inserted.

The Wheel is publishing weekly a cartoon representing the leading class B riders climbing from a soup tureen up a ladder which leads to a big bag of dollars encased in a laurel wreath on the top rung. The positions of the figures are changed weekly, the riders being shifted by the number of points each has acquired over the other as given in Spooner's record tables. Last week Eddie Bald of the Columbia team was shown with his hand on the top rung of the ladder, with a total of 79 points, and the rest of the Eastern circuit chasers bunched far below him at the center, with none of them showing over 46 points. Bald's showing for the season is therefore almost double any one of his competitors. He is unquestionably the man of the year, and his many California friends who met him last spring will be glad to hear he has been so successful, which, I may add, he attributes largely to his training in this State early in the season.