Chief Consul Thompson, with W. D. Sheldon, W. M. Meeker and S. H. Knapp Jr., left Saturday night on the theater train for Menlo Park, from which they wheeled to Saratoga by moonlight, riding to Santa Cruz yesterday via Bowlder Creek and Felton.

Several parties are being formed to wheel to the Yosemite this year, one consisting of W. M. Meeker, Walter D. Sheldon, S. H. Knapp Jr. and R. M. Thompson, who expect to go in May.Ed Landis, C. N. Langton and H. A. Spalding will go the latter part of June. F. W. Ray, J. G. Cox, E. W. Adams and others will go to Lake Tahoe. Sanford Plummer, George P. Wetmore, Thomas H. Doane and C. W. Hammer will probably do the Yosemite some time during the season.

Captain Theodore C. Dodge also appears in the picture, together with the trophy won in the race and the club's mascot, "Mike." The captain was mainly instrumental in bringing victory to the club, together with F. H. Watters and W. D. Sheldon, for it was these three men who selected and placed the team and kept after the men and with them until the race was over. 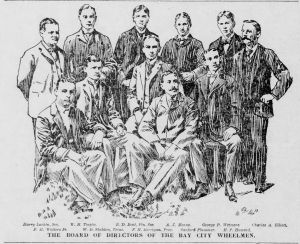